"We have a pretty eclectic group of clients," Matt McMullen, the founder and CEO of RealDoll, tells me. And where there are eclectic clients, there are going to be eclectic requests. While the company, which claims to produce the "most realistic love doll in the world," does offer ready-to-ship options, what it's truly known for is its fully customizable dolls. "Every doll that we make is truly unique because we're providing people with a sort of a palette of options," he continues.

For clients who want to build their own doll, the potential combinations on the site are pretty endless to begin with: There are 33 different faces to choose from, as well as 18 body types, 5 skin tones, and 8 eye colors before you even get to the hair and makeup. For those, you have a dizzying array of so-called "standard" choices, including everything from red lipstick to multiple shades of nude, French manicures to black nail polish, and more. The truly inspired, however, forego the company's palette altogether — and that's where the fantasy really comes to life.

While some take this opportunity to send in inspiration from a certain decade (the '80s are apparently very popular) or to be extra-particular about the hair and makeup on their doll (think bright pink lips, or freckles), others let their imaginations run wild — and Katelyn Thorpe, the makeup department head at RealDoll, welcomes these requests. "I am a fantasy nerd myself. I'm not a closet Trekkie — I don't keep it to myself. I'm an out-and-proud Star Trek fan. That's actually what got me into special effects, that whimsical idea of creating something from your brain that doesn't exist… or possibly could, who knows?" she says. "I mean, we've done purple elves. The goblin we're working on now is this really cool olive green color. We've done blue dolls. We've done a devil doll." 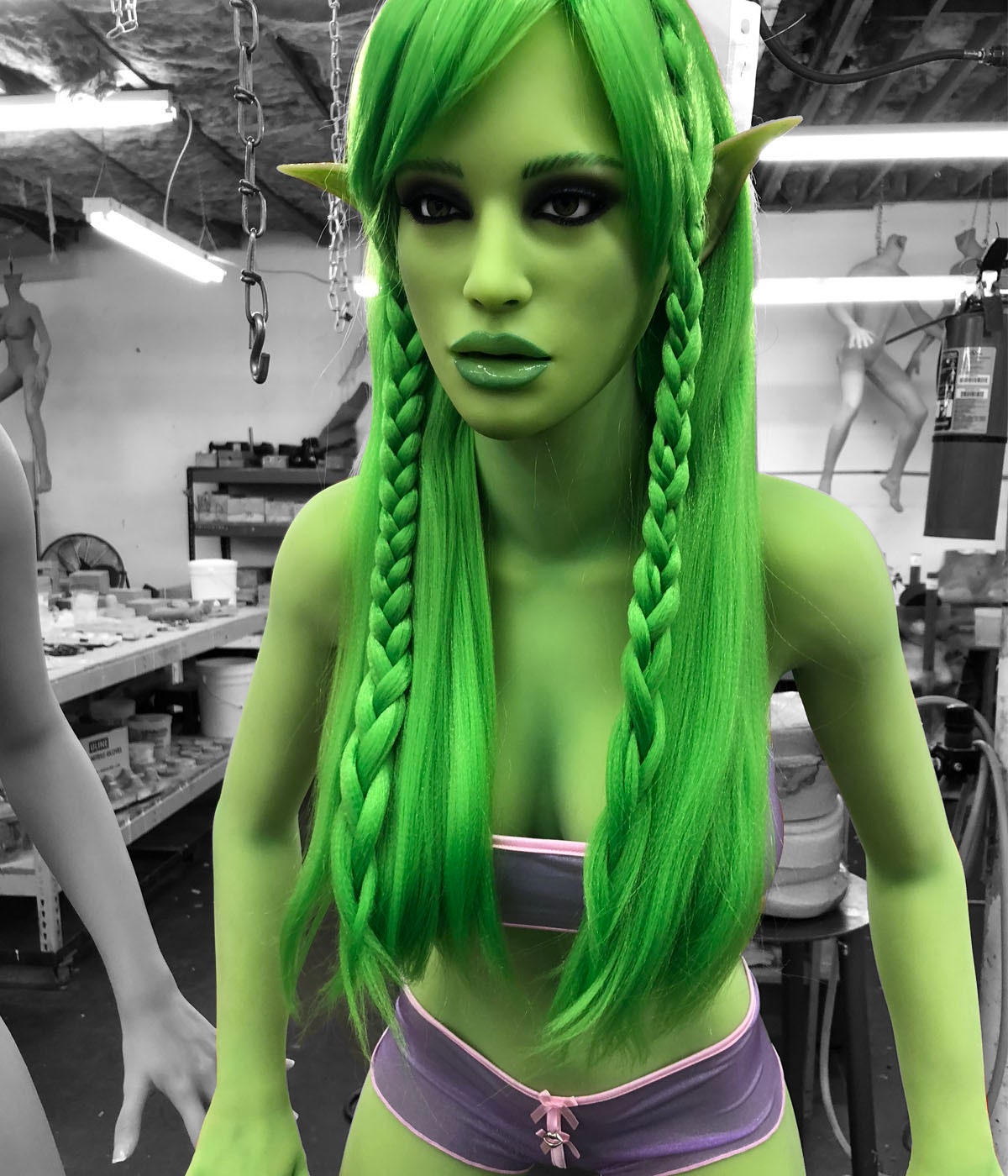 Before we get any further, the brand is clear — to me and its clients — that, for both legal and ethical reasons, they cannot do exact likenesses of characters, nor of people, but they will get as close as possible without crossing a line. (McMullen says they also do not, under any circumstances, create dolls of animals or children.) And while typically, these fantasy creations are modeled after existing source material, like a screenshot of a video game, they also build dolls that are brand-new, custom collaborations, based on character entirely borne of a client's imagination.

If this sounds like a tall order, that's because it is, but it's also a thrilling one for Thorpe. It helps that she has a background in special effects makeup, one she puts to use every day working with what she calls "her girls." All the RealDolls are made with silicone, which Thorpe says feels very similar to human skin. "It's really funny to see people freak out when they touch our dolls because they're just like, 'It's so real.' I'm like, 'That's where [McMullen] got the name,'" she says.

"Over the last few years, the requests have only gotten more outrageous."

Whether she's working on a more traditional doll or, say, a goblin, she paints on makeup much like the stuff you or I would use before she applies sealant. "I actually do use real makeup on the dolls. It's all in powder form. It's not like actual acrylic paint or anything like that, but I mean, I use real brushes," Thorpe explains. However, when an order comes in for a doll in the image of an orc or an elf (Thorpe estimates that these fantasy requests account for roughly one in every 50 dolls she paints), she really gets to flex her muscles. "Over the last few years, the requests have only gotten more outrageous. I think that's kind of my fault but it's also a good thing to me, too, because again, it's a nod to my special effects training," she tells me.

Even when you throw all the rules out, there are trends — and it seems that lately, elves are in. "The most common [request] I have seen is the elf kind of look," McMullen tells me. In fact, Thorpe recently worked with the brand's co-owner, Mike Wilson, to create a prosthetic elf ear extension for a doll that she says was upwards of four-and-a-half to five inches, likely the largest they've ever done. This sort of specificity is allowed — even welcome — because of the cost of each one of these dolls. "The amount of money they're spending on these, you could basically get a new car, you know?" says Thorpe. And when you're dropping this kind of cash, you really want to be sure that you know what you're getting.

Interestingly, she also says that the more fantastical orders seem to come in, excuse the pun, droves. While the company does advertise, Thorpe attributes this influx more to the sense of community among the RealDoll client base. "I think sometimes it comes in waves because our customers, they're so awesome," she says. "They just talk amongst themselves. They share pictures of their dolls and their works of art on their forums. They communicate with each other, like, 'Oh, look what I got, look what custom order I did,' or, 'Look what they were able to do for me.' They share information back and forth. Honestly, I truly believe more than half of our fantasy requests have come from just shared information between our customers, which is amazing." 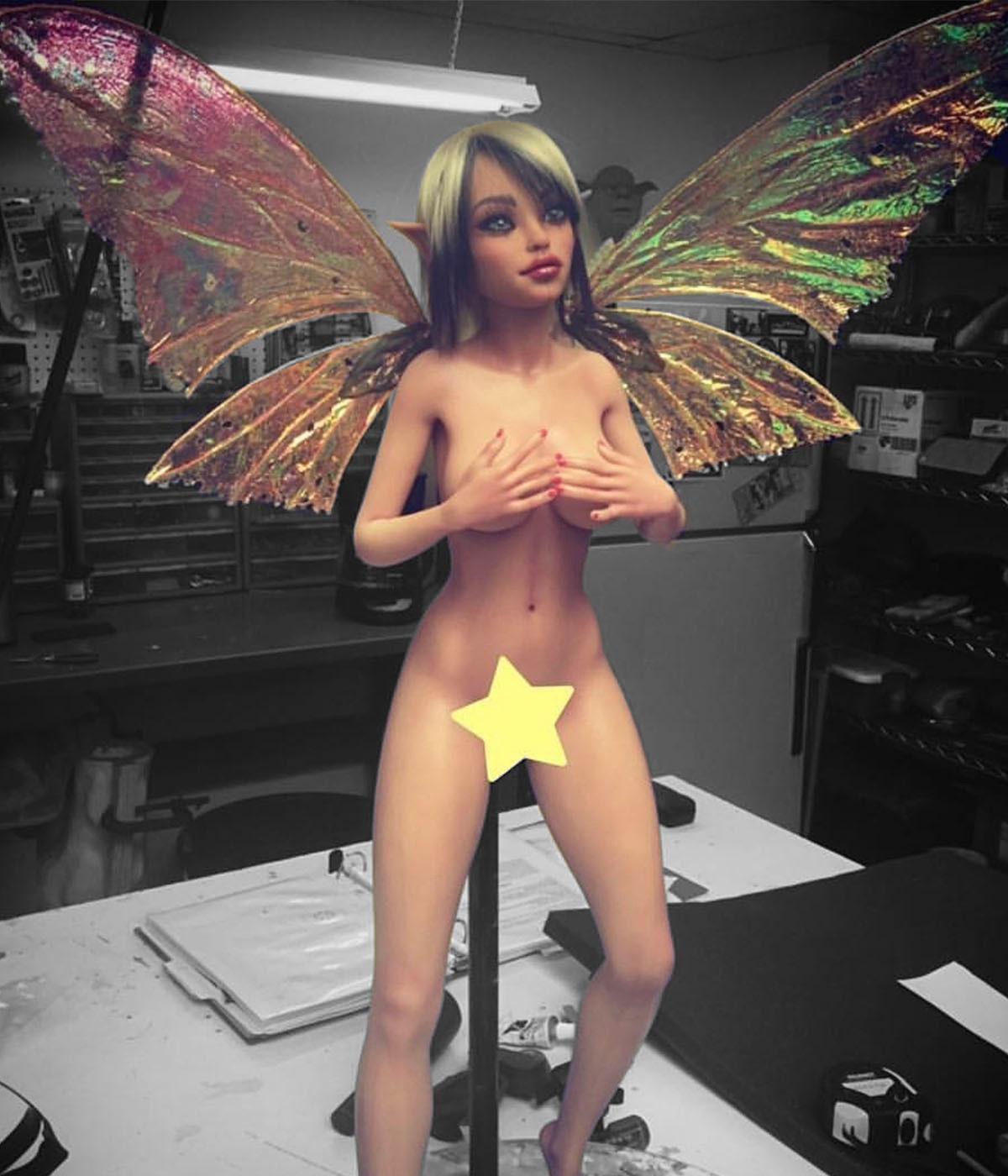 This high rate of satisfaction is key, considering not just the cost but also the length of time it takes to create these custom pieces. Thorpe says it can take from eight months to two years for the most detailed, custom face she's ever worked on: a "sorcerer priestess" with blue skin. In addition to very specific dimensions for the face, the client had custom headpieces created for the doll, so there was a lot of back and forth to get everything just right.

And while the dolls are meant to be loved, Thorpe also says that many appreciate the artistry that goes into creating each one. "A lot of people just appreciate our work and want a piece of ours. I mean, we claim to be the best in the world and we like to stand by that; delivering pieces of art is our objective," she tells me.

"I think there's a big misconception when people imagine what type of people we have as customers."

Of course, there are also those who don't appreciate this artistry. While Thorpe loves her world, she doesn't talk about it with certain people in her life, who she says sneer at it a bit. The stigma against people who buy these dolls is also visible in mainstream media as recent as HBOMax's 2021 adaptation of the book Made for Love, in which the character Herbert Green (played by Ray Romano) is still vilified and dubbed the "Town Pervert" for being in a loving relationship with his "synthetic partner," Dianne. Even in an imagined future, many still look down on having a sex doll, though the relationship between Herbert and Dianne does some work toward destigmatization — perhaps by displaying it as something that doesn't look much like ownership at all.

"I've met a lot of our clients and the vast majority of them are super down-to-earth, really nice people, many of whom may have been through some tragic situations where relationships are concerned. That can mean anything from having their heart completely broken, to losing a loved one and just not being ready to move on to another relationship," McMullen tells me. "I've really come to understand people a lot, I think [through this job], and I think there's a big misconception when people imagine what type of people we have as customers."

Another misconception? What the company is trying to do with its creations in the first place. Thorpe tells me that she's often approached by people who accuse her of trying to replace human intimacy, of trying to replace humans wholesale (yet another pun intended), or of trying to create some sort of impossible standard to which lowercase "r" real people could never live up to. But that's not the point, and it never has been. "We're not creating the ideal woman or the ideal man. We're creating the ideal woman or man for whoever ordered them. And sometimes they want them green," says Thorpe.