Home » Personal Health » Coming Out Is Hard. SCOTUS Is Making It Harder.

I came out as bisexual to the world just weeks before the United States Supreme Court ruled in favor of same-sex marriage. At the time I worked at Massachusetts General Hospital in downtown Boston; I remember sitting in my cubicle with tears streaming down my face. Joyous doesn’t even begin to explain what I was feeling. A flood of congratulatory texts came in—saying how happy they were that I could now marry any person regardless of gender.

While I knew the ruling didn’t mean the end of homophobia, biphobia, or transphobia, I did understand the significance of the historic decision. At its most base level, the ruling meant that gay, transgender, and bisexual people deserve equal rights. We deserve love. We deserve everything that straight folks have taken for granted.

Now, LGBTQ+ people are back in the courts, fighting for something, that in my opinion, is far more pivotal and necessary than same-sex marriage. We’re fighting for our livelihood.

Three cases are currently in the Supreme Court. The first two involve men who were fired after coming out as gay; the third case involves a transgender woman. She had been working and living as a man, but after informing her employer of her gender identity and intention to continue work as a woman, was promptly fired.

In these cases, plaintiffs are arguing that they are being discriminated against on the basis of their sex, which is banned by Title VII of the Civil Rights Act of 1964. SCOTUS’ job, then, is to determine if sexual orientation and gender identity are included under the word “sex.” 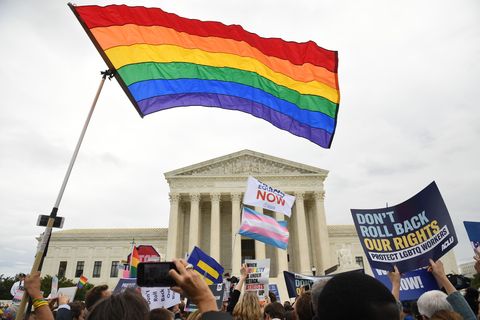 Now I’m very lucky. I write about sex and sexuality for a living, so am free to be out and open about my sexual orientation. My job, in a nutshell, is to be my most bad-ass bisexual self, but that didn’t happen by accident. I chose this path in part because I am passionate about LGBTQ and sex issues, but also because I knew it would be an easier path. I don’t admit the latter often.

When I was closeted working at a hospital, I felt uncomfortable all the time. Even after I came out as work, I didn’t feel as if I could be myself. I felt as if I was being judged. And while I don’t think my employer or coworkers were in any way homophobic or biphobic, I think they were uncomfortable with my sexuality. I could sense it.

So I pursued a career where I wouldn’t have to worry about appearing too effeminate, where I could proudly say, “Yas queen,” where I could dress as I please, and where I could be open about my sexuality. I’m privileged I was able to find a career I love that allows me to be my true self, well aware that jobs like mine are few and far between. 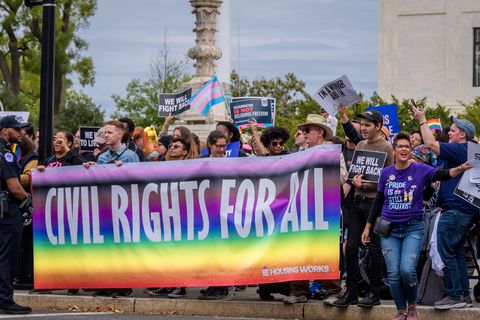 Coming out is always hard. I don’t care that’s 2019. I don’t care if you have a liberal family. I don’t care if you have all the support in the goddamn world. It is always hard. But it’s necessary for queer people’s overall wellbeing. Closeted people aren’t happy. It really is that simple. While coming out obviously has its struggles, studies time and time again have revealed that coming out will improve mental health. Maybe not at first, especially if you experience discrimination from family members, but once you find your LGBTQ+ community, then yes, your life does, in fact, get better.

Being fired for being out changes all that. Employers are asking queer people to pick between paying rent and living as their authentic self. That’s not a choice anyone, regardless of gender or sexual identity, should be forced to make.

No matter how SCOTUS rules—and right now it can go either way, depending on how Trump-appointed Justice Neil Gorsuch votes—the implications of seeing this struggle shouldn’t be underestimated.

“Frequent reminders of the vulnerability and low social status of one’s group can be quite stressful,” says Sara Burke, PhD, Assistant Professor of Psychology at Syracuse University. “Recent high-profile debates about overt discrimination may serve as such reminders for some, contributing to a sense of trepidation about the ever-present possibility of social rejection and discrimination.”

It’s one thing to watch the SCOTUS cases play out. But the actual ruling—if it permits firing a person based off of their sexual orientation or gender identity—will be far more damaging.

“Perhaps more importantly, ongoing patterns of actual discrimination are a constant drain on the wellbeing of queer communities, and the outcomes of legal battles could either check or accelerate such discrimination,” Burke says. 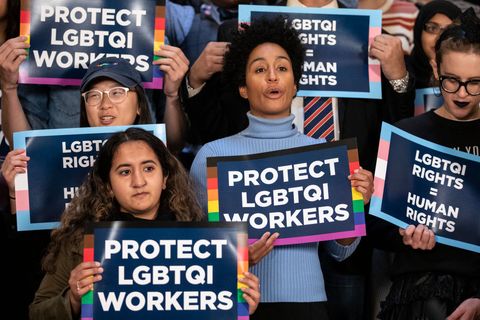 In years past on National Coming Out Day, I’ve shared my own journey to accepting who I am (read here), and I’ve always encouraged others to come out. While I’ve always added the caveat of “come out only if it’s safe to do so,” I’m fully realizing that it’s never 100% safe.

Let’s say that SCOTUS decides Title VII doesn’t protect gay, bi, and trans people. This affects all queers. “It’s possible that people who had previously decided it was safe to be out at work could become suddenly vulnerable to legally protected discriminatory practices,” says Jesse Kahn, LCSW, CST, the Director & Sex Therapist at the Gender & Sexuality Therapy Center in New York City.

This makes it tough for me to advocate for every queer person to come out, especially when I know I was only able to embrace my sexuality publicly because I faced far fewer obstacles than most other queer people.

Nevertheless, I still have to ask: If you can come out, please do. “The power of ‘coming out’ has long been about not only creating a sense of personal freedom for people, but also about increasing the visibility of queer people more broadly, which helps humanize and de-mystify what it means to be LGBTQ+,” says Jor-El Caraballo, a licensed mental health professional who works largely with LGBTQ+ clients.

I hate that in 2019, visibility is still so crucial, because in my mind, visibility is only the first step to ending discrimination. It’s just saying, “Look, I exist,” or “Look, you’re not alone.” It doesn’t go further. It doesn’t say ‘You should treat us with respect’ or ‘We deserve equality.’ Sadly, we still live in an era where we’re fighting for our existence and other basic rights, so visibility is as important now as it was 55-years ago when Title VII was passed.

That’s why I’m asking you today, on National Coming Out Day, to please come out, if you can. Embrace your queer self. Flaunt it for everyone to see. Yes, there will be challenges. But if you’re willing to be visible, we’re here to welcome you.