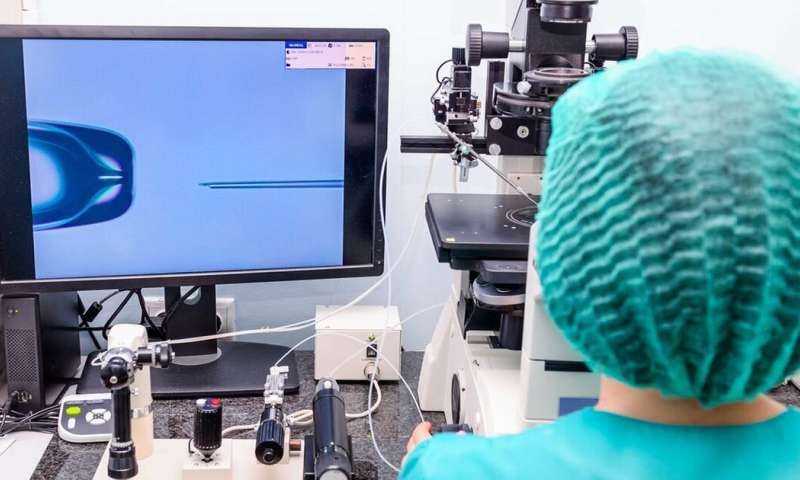 Should researchers put the brakes on genetically engineering babies? Leading scientists and ethicists recently called for a moratorium on clinical applications of germline gene editing: inheritable alterations to the DNA of embryos to improve kids’ health or other features – or just “gene editing,” for short.

This declaration was prompted in part by the birth last year of the first gene-edited babies in China. The birth was roundly condemned by experts and may result in charges against He Jiankui, the lead scientist involved.

The call for a moratorium is grounded in two main concerns. Its supporters assert, first, that the risks of gene editing are simply too uncertain and potentially large to proceed. Secondly, the deeply controversial nature and potential social impact of altering human DNA means researchers need “broad societal consensus” before proceeding.

The authors suggest a five-year pause to wait for more scientific progress and public dialogue. At that point, the authors propose, societies may choose to begin a path forward for gene editing, if risks are deemed acceptable and the process is fully transparent.

However, several scientists have pushed back against the call for a moratorium, including gene-editing pioneer Jennifer Doudna and geneticist George Church. As a biomedical ethicist, I believe the objectors raise valid concerns about the relevance and usefulness of a moratorium that are worth reflecting upon.

Plenty everyone agrees on

To be sure, those for and against a moratorium actually agree on some key points.

Almost no one thinks the world is ready for clinical trials today, as more basic science is needed to minimize risks like editing the wrong bits of DNA, or “mosaicism,” where some but not all DNA in an embryo is altered. He Jiankui’s rogue science was clearly unethical for this and other reasons, including a lack of transparency and flaws in informed consent.

There is also no pushback against the idea that the world needs to have a public conversation about gene editing. Do you want to live in a society where embryos’ DNA is edited in order to improve the lives of the next generation? Are the risks of gene editing worth the benefits? Can and should we draw a bright line between editing for disease prevention and editing for enhancement? These questions cannot be answered only by experts, and require substantial public engagement.

Nevertheless, a divide over other issues remains.

Already, over 30 countries prohibit this sort of gene editing, either by law, regulation or enforceable guidelines. For this reason, it was quite easy for the director of the U.S. National Institutes of Health to endorse the proposed moratorium – the NIH, the largest public funder of biomedical research in the world, is already prohibited by law from funding clinical applications of gene editing. So a moratorium is at best redundant in those nations, perpetuating the status quo.

It is also liable to cause confusion. If a country or scientific body announces a moratorium as recommended, this could misleadingly imply that germline editing was previously permitted and unregulated. It could also suggest that some countries’ bans will expire in five years, when currently none has a time-limited prohibition.

Arbitrariness of a blunt instrument

At the same time, I believe a moratorium could work in countries that currently lack prohibitions on gene editing. It could help prevent rogue scientists from seeking environments that are relatively unregulated to pursue dubious experiments. This is what happened with the first births using mitochondrial replacement (so-called “3-parent IVF”): An American fertility doctor carried out part of the procedure in Mexico because he perceived the rules as laxer there.

Additionally, the call can be heard as an argument for reform of current laws and regulations: Society should revisit prohibitions and – depending on the evidence and popular opinion – consider rescinding them in five years’ time.

But some researchers remain concerned that a moratorium is an overly crude and arbitrary means of regulating a controversial new technology. While the technology is currently not fit for clinical use, are scientists so certain that it still won’t be within five years’ time? More flexible regulatory frameworks that do not include arbitrary timelines could better adapt to rapid scientific developments and shifts in public perceptions.

Finally, it’s unclear whether a moratorium is consistent with the democratic norms that the proponents of a moratorium espouse. In particular, they reiterate the idea that researchers should only proceed with germline gene editing if there is broad societal consensus on how to proceed.

But shouldn’t a moratorium itself be subject to the requirement of broad societal consensus? Blanket prohibitions will have a substantial impact not just on the scientific community but on access for the rest of society to the potential fruits of research – a potential infringement of the human right to benefit from science. Whether that infringement is justified is an important question that cannot be answered by experts alone.

To some extent, democratic countries that ban gene editing will have already undergone typical (if flawed) democratic processes to come to that decision. But in places that the moratorium is not redundant, it is reasonable to demand broad societal consensus before proceeding with a moratorium that even leading scientists don’t all agree on.

The cautious may argue that a presumption against gene editing is warranted before consensus can be established, because of the substantial individual risks and societal impact of proceeding to alter the human genome for future generations. However, those societal risks are very substantial only if gene editing quickly becomes widespread. That is something careful regulation rather than a blanket prohibition might be well-suited to address.

In addition, I see it as somewhat problematic for experts to impose their own personal assessment of whether the risks outweigh the benefits of gene editing on the rest of society. Weighing risks and benefits is a fundamentally ethical issue, not one where scientific expertise can resolve the matter.