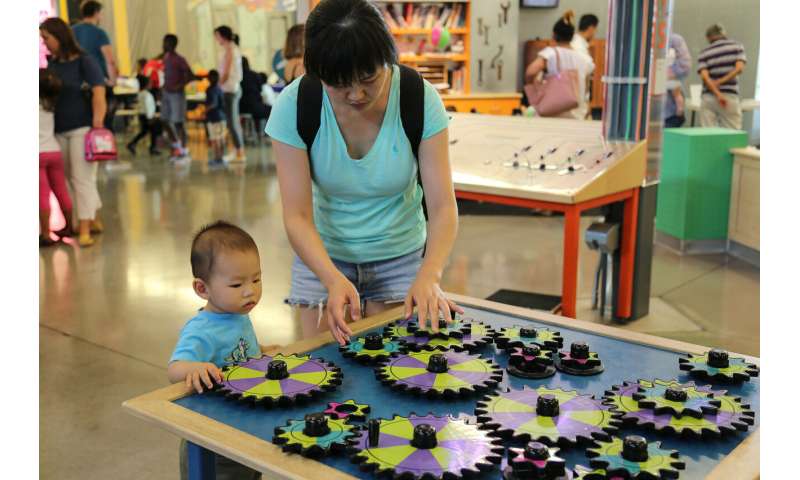 Whether it’s probing a child’s understanding of a topic through questions or engaging in hands-on activities alongside them, parents can guide their children to learn in new ways through simple directions, according to a study by psychology researchers at The University of Texas at Austin.

Prior research shows that children use both exploration and explanation when learning, oftentimes using exploration to generate new explanations and using explanations to spark further exploration. A new study published in Child Development examines this interplay to show how simple cues from parents for their children to either “explain” or “explore” influences their children’s learning behavior and abilities, particularly as it relates to scientific reasoning.

“Despite the widespread recognition that children learn through collaboration, most research on children’s causal reasoning is conducted on individual children in laboratory settings,” said Cristine Legare, the study’s senior author and a psychology associate professor at UT Austin. “Our study examined parent-child collaboration in a real-world learning environment, a local children’s museum called the Thinkery, to provide parents and educators with suggestions on how to engage children in playful and open-ended ways of learning.”

In the study, researchers examined how children’s understanding of causal mechanisms, as demonstrated in the Thinkery’s exhibit on gears, was influenced by minimal interventions from their parents. During a three-minute interaction in the exhibit, parents of 65 children, ages 4 to 6, were directed to give their children one of three directions—”explain,” “explore” or play as they normally would (baseline condition).

Researchers found both child and parent behaviors were uniquely influenced by each cue. For example, parents who encouraged explanation asked questions for 18 seconds longer than parents in the baseline condition, resulting in their children talking about and spinning the gears 5.7 and 16.7 seconds longer, respectively.

Parents who encouraged exploration behaved similarly to those in the baseline condition, but their children spent 26.8 seconds longer connecting gears. Overall, children encouraged to explore built larger, more complex gear machines than either of the other groups, particularly those in the explain condition who spent more time, on average, spinning gears than connecting them.

“Parents in the explain condition engaged in more behaviors that support learning, such as asking questions, and fewer behaviors that hinder learning, such as fixing problems for children, than parents who gave no directions at all,” Legare said. “Similarly, parents who encouraged their children to explore helped their children engage more with the activity and build more complex machines.”

After interacting with the exhibit, children participated in tasks to gauge their causal understanding. No condition had a significant impact on task performance, but some behaviors had more influence than others, researchers found. For example, children who spent more time spinning gears, answering parents’ questions or troubleshooting on their own did better on follow-up tasks than those whose parents troubleshot for their children in the exhibit.