Athlete Gwen Berry is facing criticism after a incident at the US Olympic track and field trials that took place over the weekend. The hammer thrower and mom of a son, Derrick, placed third in the hammer event which took place in Eugene, Oregon, and says that the playing of the national anthem while she was on the podium was a set up. 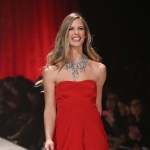 This Olympian's Nude Breastfeeding Pic Is SO Impressive, But of Course She's Getting Hate for It

According to CNN, Berry turned away from the flag to face the stands while “The Star-Spangled Banner” played during the medal ceremony on Saturday. She then draped a T-shirt that said “activist athlete” over her head. With her third place in the hammer event, Berry earned a spot on the US team for the Tokyo Olympics, which begin next month.

Berry who is know for being an outspoken athlete wears the title of “activist athlete” with pride. Known for her strong voice in the fight for racial equality, she’s known to raise her fist while on the podium during track and field events, but she’s also no stranger to the criticism and judgement that comes with it. In 2020, Berry wrote an op-ed for the New York Times for an article titled, “I Used the Podium to Protest. The Olympic Committee Punished Me,” where she said that the Olympics are rife with hypocrisy: “Olympians are celebrated for their courage, drive and tenacity. But if they are spurred by those same traits to demand racial justice? That’s a punishable offense.”

Before you go, check out these celebrity parents who talk to their kids about racism.