Home » Kids Health » Life With an Empty Nest: The Good, The Bad & The Ugly (Crying)

True confession: from the time my kids were rousing, and sometimes carousing, teenagers, I secretly looked forward to an empty nest. I longed for a clean house, easy, unplanned dinners and well quite frankly, me time. My friends lamented about how sad they’d be ushering their kids off to college, but I was counting down the days. Don’t get me wrong. I love my kids to pieces, but 18 years is enough.

Fast forward to that first experience dropping my son off at college. I had meticulously planned and shopped for his new independence, taking great care to ensure he had all the comforts of home. We set up his room, which required more than one trip to Target for storage bins, and followed the other parents’ leads when it was time to depart. I gave him a stoic yet tearful hug goodbye and, as we drove off campus, the water works started. My husband and I drove the nine-hour trip home in silence, except for a quick stop for our last fix of Tennessee barbecue. I stared out the window with occasional tears streaming down my face wondering what life was going to be like without my favorite son around the house. 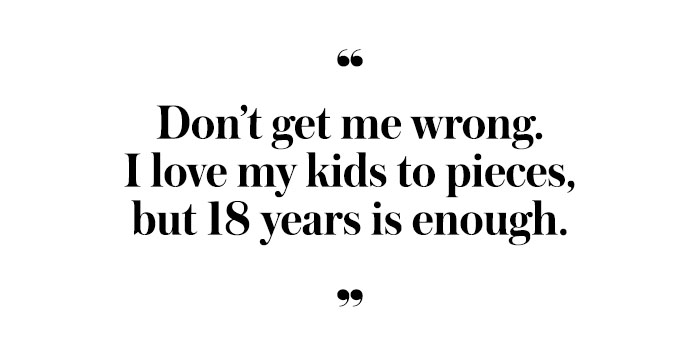 Dropping my daughter off two years later was a bit of a different experience. She was my high-maintenance child — most girls are — so getting her out of the house was a bit more of a kick-my-heels-up-in-the-air kind of feeling. I would no longer get in the shower only to discover that my shampoo bottle was empty or my razor was missing. Let’s just say the tears flowed but were more of a sprinkle than a downpour.

“Empty nest” might be a bit of a misnomer. I’m nesting more now than I did in those pre-maternal days. My house is once again neat and organized and my husband and I relish those weekends lounging in our clean, quiet nest.

I don’t miss the messy rooms or the late nights worrying my kids were out driving around — truth be told, I was excited to know that they were on a college campus where their social life was within walking distance. That’s not to say that the stress of worrying about your kids doesn’t go away. But I sleep much more soundly at night now that I’m not waiting up for them to come home. I should caveat, though: I do have an app on my phone that tells me their locations (with their permission), so if I do have that 3 a.m. panic attack, I can check my phone and ensure they’re safely where they’re supposed to be. 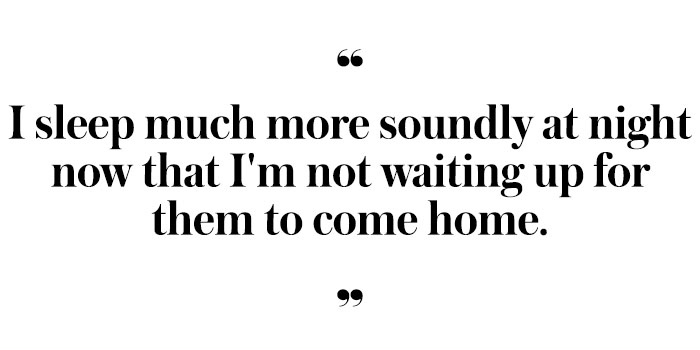 There is something oddly reassuring knowing that they’re on their own to make decisions. Although I don’t consider myself a helicopter parent (maybe a hang-gliding parent), I doled out a lot of unsolicited advice on how to deal with friends, teachers and other sticky situations. But being in college, they’re now somewhat on their own to figure these things out for themselves. I do love those late night texts, “Mom, I need your advice on something.” It gives me hope that they’ll always need their mom.

Those first trips to visit for parents weekends were like pouring salt in an open wound. Again, as we made the trip home, I would stare staring blankly out the window, but for shorter periods. Each time if felt like a cruel tease because I’d once again arrive home to an empty house.

But rest assured, re-entry got easier each time as we all adjusted to our lives apart — until that first Christmas break. No one warned me that having my newly independent young adult in the house would upset my new ecosystem. I had just learned to sleep through the night without worrying about their whereabouts, but suddenly, they were shirking curfew and staying out until all hours of the night, reconnecting with old friends. There are no curfews in college so what’s a mom to do? That first year, my son sauntered in at 4 a.m. and, yes, I was up waiting for him.

One thing I was not prepared for was a loss of our silly traditions. Each year on the night before the first day of school, I would put a hotel-style door hanger on their doorknobs and let them choose their breakfast for the next day, just to alleviate any first day jitters. That first August when all of my friends were posting about their kids’ first day of school, I’ll admit I felt a little tug at my heart strings that I would not be on the computer making my door hangers. And as much as I hated carpool pickup lines, I found myself missing those Friday afternoon traditional Dairy Queen stops for ice cream to celebrate the end of a week. If nothing else, maybe they’ll do these things for their children someday.

Remember that “me” time I had longed for? There is such a thing as too much of a good thing. My husband often travels for work and I often find myself sitting home alone longing for the busyness of teenagers. I had no one to watch movies with, no one to share my carryout Chinese food with and no one to keep me up late at night with worry. But an empty house is a quiet house. And a quiet house is a lonely house. I leave the TV on for extended periods, without watching it, just to counter that loneliness. Occasionally, I hack into my kids’ Spotify accounts and listen their playlists. Ultimately, I did learn to plan for these solo periods and I began scheduling nights out with my girlfriends who were also recently orphaned.

Now that we are truly empty nesters, it feels like our relationship as husband and wife was put on hold while we raised our kids and we are picking up right where we left off as newlyweds. We linger longer in restaurants, we listen to music over after-dinner drinks and we stay out late. We take weekend getaways where sitting on a soccer field is replaced with sitting in a tasting room at a vineyard. We have conversations about things other than our kids. We eat bowls of cereal for dinner in front of the TV. It’s different, but it’s a good different. Flown and grown is a good thing, I think as I pat myself on the back.