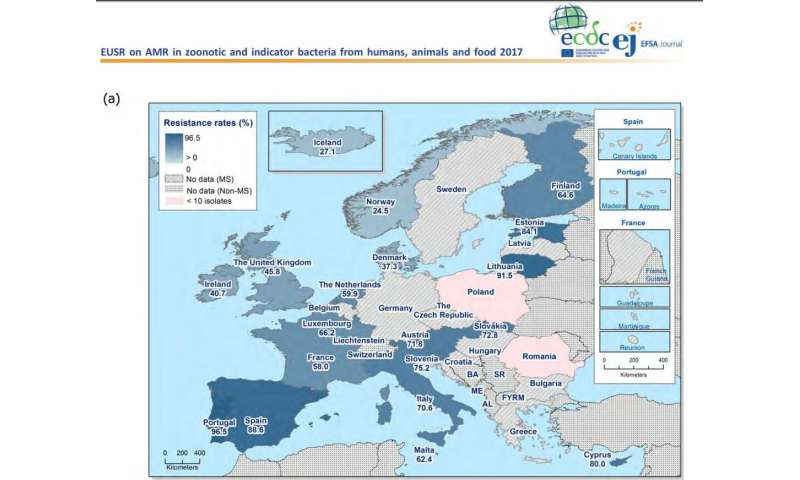 Data released today by the European Centre for Disease Prevention and Control (ECDC) and European Food Safety Authority (EFSA) reveals that antimicrobials used to treat diseases that can be transmitted between animals and humans, such as campylobacteriosis and salmonellosis, are becoming less effective.

Vytenis Andriukaitis, EU Commissioner for Health and Food Safety, said: “The report released today should ring alarm bells. It shows that we are entering into a world where more and more common infections become difficult or even impossible to treat. However, ambitious national policies in some countries limiting antimicrobial use have led to a decrease of antimicrobial resistance. So before the alarm bells become a deafening siren, let’s make sure that we increasingly act all together, in every country and across the public health, animal health and environment sectors under the One Health approach umbrella.”

According to the report, which refers to 2017 data, resistance to fluoroquinolones (such as ciprofloxacin) is so high in Campylobacter bacteria in some countries that these antimicrobials no longer work for the treatment of severe campylobacteriosis cases.

Most countries reported that Salmonella in humans is increasingly resistant to fluoroquinolones. Multidrug resistance (resistance to three or more antimicrobials) is high in Salmonella found in humans (28.3 percent) and animals, particularly in S. Typhimurium. In Campylobacter, high to extremely high proportions of bacteria were found to be resistant to ciprofloxacin and tetracyclines. However, combined resistance to critically important antimicrobials was very low to low in Salmonella and Campylobacter from humans and animals and in indicator E. coli from animals.

“Now is the time to turn the tide on antimicrobial resistance if we want to keep antibiotics working,” Mike Catchpole, ECDC’s Chief Scientist, said. “It’s particularly worrying when it comes to combined resistance: even low proportions mean that many thousands of patients across the EU have limited treatment options for severe infections.”

Marta Hugas, EFSA’s Chief Scientist, said: “We have seen that when Member States have implemented stringent policies, antimicrobial resistance has decreased in animals. Annual reporting by European and national agencies includes noteworthy examples. This should serve as an inspiration for other countries.”

The joint report, which presents the data collected from 28 EU Member States from humans, pigs and calves under one year of age, confirms the rise in antibiotic resistance already identified in previous years.