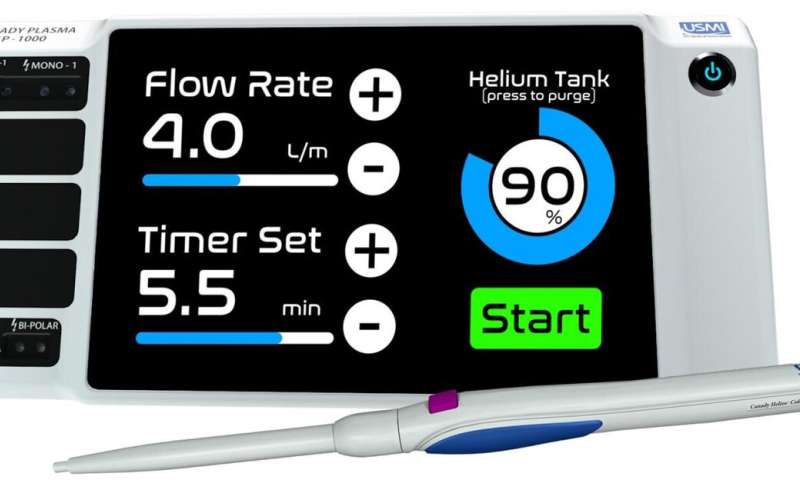 Cold atmospheric plasma technology, currently the only way to remove microscopic cancer tumors remaining from surgery, has been approved by the U.S. Food and Drug Administration for first-ever use in a clinical trial.

For solid tumor cancers such as those in the breast and lungs, standard treatment involves chemotherapy, radiation, surgery or all of the above. When these tumors aren’t fully removed, they can cause the cancer to come back. Approximately 20%-40% of women undergoing partial mastectomy in the U.S. each year, for example, return to surgery because of marginal tumors that the surgeon couldn’t see the first time around.

A multi-institute team, which included Purdue University aerospace engineer Alexey Shashurin, developed a pen-like electrosurgical scalpel that sprays a blue jet of cold plasma at any remaining cancerous tissue or cells for 2-7 minutes. The device targets only tumors, leaving surrounding tissue unharmed, as demonstrated in vitro, in vivo and in FDA-approved compassionate use cases prior to the clinical trial.

U.S. Medical Innovations LLC (USMI) and the Jerome Canady Research Institute for Advanced Biological and Technological Sciences (JCRI/ABTS) led the team and are sponsoring the clinical trial, with plans to recruit patients in September.

USMI developed and patented the first high-frequency electrosurgical generator with cold plasma for the selective treatment of cancer in 2014.

“Plasmas are very reactive, which can cause a variety of responses on the cellular level in biological tissue. But because they’re also extremely hot gases, there had been a push over the past 20 years to generate and test cold plasmas for biological applications,” Shashurin said.

In 2008, Keidar and Shashurin were among an early wave of researchers to develop a cold plasma generator and see that it produces responses from biological tissue. By 2011, the team had published a paper in the British Journal of Cancer showing that cold plasma selectively kills cancer cells in animal models.

Keidar and Shashurin began consulting with USMI in 2013 on creating an industrial-scale prototype of the cold plasma generator and its application for cancer treatment, based on a generator they had developed and patented. The goal was to integrate cold plasma with Canady Hybrid Plasma electrosurgical scalpels already used in operating rooms because these scalpels allow for bloodless surgery. This is due to their ability to cut and coagulate tissue at the same time, sealing off blood vessels.

“Cold plasma application is the fourth arm for the treatment of cancer, following chemotherapy, radiation and surgery. There’s no other ‘magic bullet’ out there for killing off residual tissue,” Canady said.

One of the clinical trial sites for this device will be Rush University in Chicago. Meanwhile, Shashurin’s lab at Purdue will continue to collaborate with USMI on further development of this technology.