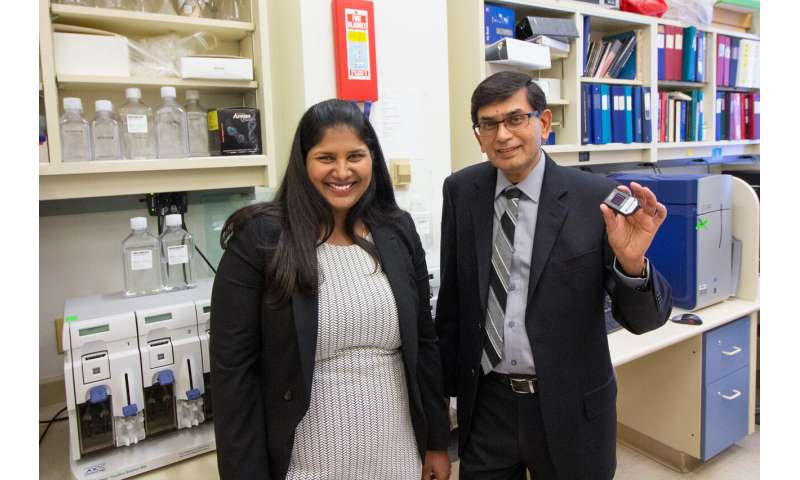 University of Alberta researchers have added a new genetic marker to the breast cancer map, helping to expand the list of genetic mutations clinicians can watch for in cancer screenings.

The genetic marker—called rs1429142—was found to confer a higher risk of breast cancer in Caucasian women carrying the genetic variation compared to women without the variation. In premenopausal women, that risk reached as high as 40 per cent. The ability to identify those genes and their variants (called alleles) can be vital to early detection and life-saving treatment.

“This is important because the more we are able to create a complete picture of all the genes and all the variations and mutations that contribute to breast cancer, the closer we get to developing a genetic screen for breast cancer on a population level,” said Sambasivarao Damaraju, a professor at the U of A’s Department of Laboratory Medicine & Pathology and a member of the Cancer Research Institute of Northern Alberta. “If we can identify women at risk before they are diagnosed, and as long as we have the resources to mitigate that risk through preventative approaches, we can reduce the overall burden of breast cancer risk in a population.”

Though the study primarily focused on genetic causes of breast cancer in Caucasian women, Damaraju’s team went on to validate their findings in women of Chinese and African descent to explore the impact demographics may have on cancer risk.

Breast cancer is the most common cancer in women, with an estimated one out of every eight women expected to develop it in their lifetimes. While environmental factors like smoking, diet or lack of physical activity can lead to cancer, a person’s genes also contribute to the risk of getting the disease.

“One of the real benefits of this research is that it brings a lot of focus to premenopausal breast cancer, which otherwise wasn’t thought much about,” said Mahalakshmi Kumaran, Damaraju’s graduate student and first author on the paper.

The study, published in the International Journal of Cancer, is the first of its kind to examine breast cancer risk in Caucasian women divided into premenopausal and postmenopausal groupings. Because the majority of breast cancers are diagnosed in women over the age of 55, most genetic association studies focus on postmenopausal women. However, inherited forms of cancers, typically related to genetic mutations, are more likely to be more aggressive and be diagnosed earlier in life.

The researchers examined more than 9,000 women from Alberta for the study, utilizing samples from patients diagnosed with breast cancer and unaffected healthy controls from the Alberta Cancer Research Biobank and The Alberta’s Tomorrow Project, respectively.

The DNA isolated from the participants’ blood provided clues to specific chromosomes that showed links to breast cancer risk. Using those clues, the team began to zero in on the specific regions of the chromosome to locate genetic variations across samples. They noticed that rs1429142 showed a consistent association with breast cancer risk in multiple tests. When the data was analyzed based on menopausal status, the risk was shown to be significantly higher for premenopausal women.

After confirming the link between the genetic variant and breast cancer, the team then took the extra step of zooming in the genomic region to identify the specific location of the gene on the chromosome and marking it for future researchers.

“Finding this genetic marker is like starting with a high-resolution Google map of the world, and then slowly zooming in to the image of your house,” Damaraju said. “It is valuable to do because now we have essentially planted a road sign on the chromosome that can help future researchers to carry out further in-depth studies.”

Using international data from other genetic studies of breast cancer, and contributions from Vanderbilt University and St Jude Children’s Research Hospital investigators from Tennessee, the team was also able to validate their findings in women of Chinese and African descent. They found that women of African descent were at a particularly high risk of premenopausal breast cancer as a result of the variant gene. This underlined the idea that genetic ancestry plays an important role in cancer risk.

While the study focused primarily on the genetic variation present on a single chromosome, Damaraju said they also found promising leads for identifying more cancer-related genetic markers on other chromosomes as well. In the future, he hopes to see his research contribute to a more precise method of treating breast cancer by tailoring therapies to the specific needs of the patient.