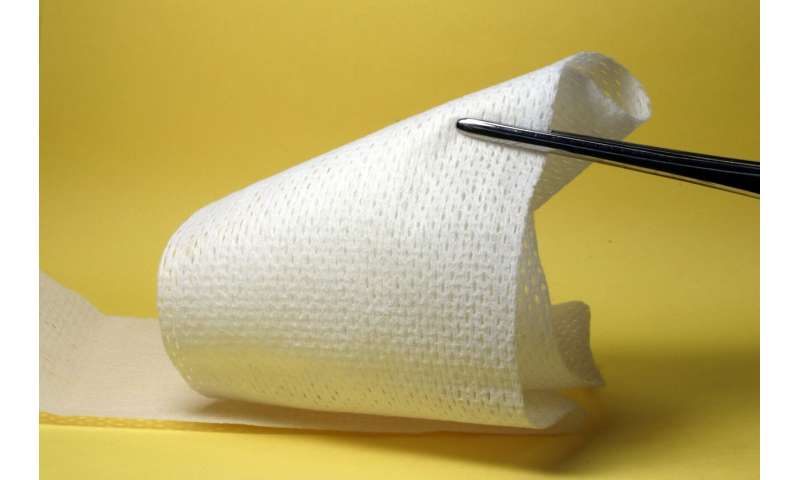 New research suggests that the microbial communities associated with chronic wounds common in diabetic patients affect whether those wounds heal or lead to amputations. Work led by University of Wisconsin School of Medicine and Public Health Professor of Medical Microbiology and Immunology Lindsay Kalan and her colleagues at the University of Pennsylvania found that particular strains of the common pathogen Staphylococcus aureus exclusively infected diabetic foot ulcers that never healed, indicating these strains may delay healing.

The researchers also found that other common bacterial members of these wounds can impair or even improve healing. In all, the study suggests that monitoring the microbiomes of diabetic foot ulcers could provide doctors with information on how to best treat these chronic and debilitating wounds. The new work is published April 18 in the journal Cell Host and Microbe.

Diabetic foot ulcers, which affect four to six million people in the U.S., cost between $9 billion and $13 billion each year. A quarter of people with diabetes will develop a foot ulcer because high blood sugar causes numbness that makes wounds go unnoticed and reduces circulation, which worsens healing times. The wounds can last for months or even years and are the leading cause of amputations in diabetic patients. When ulcers do lead to amputations, mortality rates exceed 70 percent, higher than many cancers.

“There’s been very little innovation in treating these wounds,” says Kalan, who has long studied chronic wounds and began the current work as a postdoctoral researcher in the lab of Elizabeth Grice at the University of Pennsylvania.

Recently, scientists have investigated the role that bacterial colonization of these wounds plays in whether they heal or not. But that previous work relied on low-resolution techniques that were only able to identify broad groups of bacteria in the wounds, not specific members of the community.

So Kalan and her team turned to DNA sequencing that provided high-resolution identification of particular species or subspecies that may be key to understanding how microbial communities influence healing.

The researchers collected these data from the ulcer microbiomes of 46 patients immediately before their wounds were debrided, a common treatment that scrapes away dead or infected tissue to try and jumpstart new healing. They then collected new microbial samples every two weeks for 26 weeks while tracking the outcome of the ulcers.The bacterium S. aureus was found in the vast majority of the wounds. Well known for its resistance to antibiotics, S. aureus is a common and often difficult pathogen to treat. At the species level, the presence of S. aureus did not predict whether a wound would heal or not—it was simply everywhere.

But with high-resolution data on individual strains of S. aureus, the researchers discovered that some strains only resided in wounds that did not heal during the study.

“When we looked at the genome of these strains, we found that they were enriched in virulence factors like enterotoxins and that they had more antibiotic resistance genes, so they were better equipped to cause a more invasive infection compared to some of the other strains we detected,” says Kalan.

Since the researchers kept sampling the microbiomes of ulcers throughout the study, they were able to watch as the microbial community changed in response to treatment. In line with the fact that antibiotics rarely improve ulcer outcomes, Kalan’s team found little change in the ulcer microbiome of patients treated with them.

In contrast, debridement reduced the diversity of bacteria colonizing the wounds in ulcers that went on to heal. Those results suggest that the disrupted microbial community could serve as a sign of successful debridement, helping inform the course of treatment.

“If we can use the microbial community to tell within 24 hours that debridement wasn’t effective and a patient needs to come back for more treatment, it would greatly reduce care time and the patient’s time away from work,” says Kalan.

To better understand how the microbiomes might directly affect wound healing, the researchers recreated microbial communities in a mouse model of diabetic ulcers. They transferred individual bacterial strains isolated from human patients to ulcers in mice and monitored how the wounds healed.

Not surprisingly, the strains of S. aureus that were exclusively found in non-healing ulcers delayed healing by several weeks, further implicating these particular strains in creating worse clinical outcomes.

But another common member of wound microbiomes, Alcaligenes faecalis, actually reduced the growth of ulcers in the mouse model and wounds infected with the bacteria healed nearly as quickly as uninfected wounds. Kalan says the relatively benign effect A. faecalis had on wounds may be because it stimulates beneficial inflammation in the wounded skin, indicating that some community members could even offset the detrimental effects of more harmful bacteria.