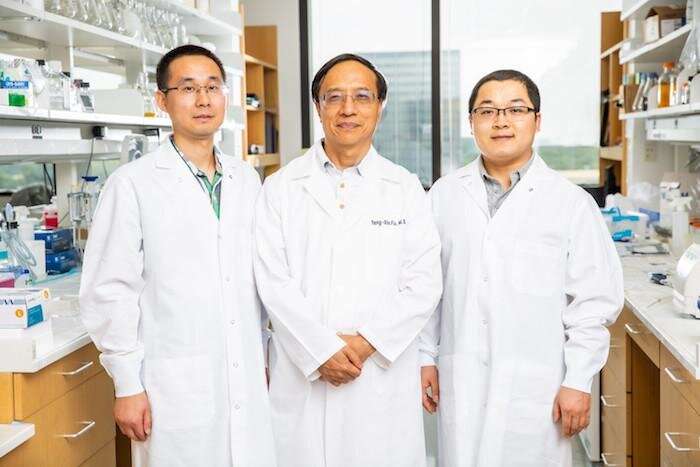 The study published today in Science Immunology suggests that giving the two therapies as short course, first-line treatment might work better than the current practice of providing one treatment early and the other treatment only if tumors relapse.

“This study reveals the importance of the proper combination and timing of tyrosine kinase inhibitors and immunotherapy such as the programmed death-ligand 1 (PD-L1) inhibitor, also known as immune checkpoint blockade. If borne out by future research, these findings might open new treatment avenues for many cancer patients,” said corresponding author Dr. Yang-Xin Fu, Professor of Pathology, Immunology, and Radiation Oncology and a member of the Harold C. Simmons Comprehensive Cancer Center.

“Many cancers have high and abnormal tyrosine kinase activities. Tyrosine kinase inhibitors, or TKIs—which target specific cancers—are a common first-line treatment for rapidly shrinking tumors such as those associated with kinase-driven breast cancer and lung cancer. But tumor relapse or resistance often occurs. The standard of care is to use TKIs first and then use immunotherapy such as PD-L1 inhibitors after relapse occurs,” Dr. Fu explained. “Our study showed that immunotherapy should be used together with the TKIs as the first-line—not second-line or third-line—treatment. We also demonstrated that the dose and timing of the TKI is important.”

Earlier studies that found increased side effects when TKI and PD-L1 were given together had used HyperTKI rather than the HypoTKI provided in this investigation, said Dr. Fu, a physician-scientist who holds the Mary Nell and Ralph B. Rogers Professorship in Immunology.

PD-L1 inhibitors are thought to enhance adaptive immunity to overcome the ability of some tumor cells to develop resistance to TKIs, he added.

Compared with standard HyperTKI therapy, the HypoTKI approach triggered greater innate immune sensing and a more potent release of type I interferon and other cytokines through an innate immunity signaling pathway to enhance tumor-specific T cell infiltration and reactivation. The researchers also found that HypoTKI was more potent than HyperTKI in limiting tumor relapse in a host immune response-dependent manner. More importantly, they observed that PD-L1 blockade could further enhance the anti-tumor effectiveness of HypoTKI treatment in advanced large tumors and limit the relapse. The timing of the dose of the drugs was important, he said.

The study is among the first to find that this class of TKIs can trigger the innate immune response, Dr. Fu said. “We think there might be a threshold effect with HypoTKI in which the treatment more effectively alerts the innate immune system. It appears that higher-dose/shorter duration TKI treatment may spark a more potent anti-tumor response by better triggering the innate immunity system.”

In one series of experiments, the researchers found that tumors were completely resistant to anti-PD-L1 therapy alone, so-called monotherapy. When HypoTKI was given by itself, it markedly reduced tumor burden initially, but all tumors relapsed eventually.

When the two treatments were given concurrently and early, it resulted in the best tumor regression and most mice showed no relapse over more than two months of follow-up. Tumor relapse in mice usually occurs within two to three weeks.

“The maximum synergistic effect of combination therapy depends on the timing of the anti-PD-L1 treatment. When it was started within three days of TKI administration, there was total tumor regression and only two of eight tumors relapsed,” Dr. Fu said.

Almost no synergistic effect was seen if PD-L1 inhibitors were provided a week after TKI therapy.