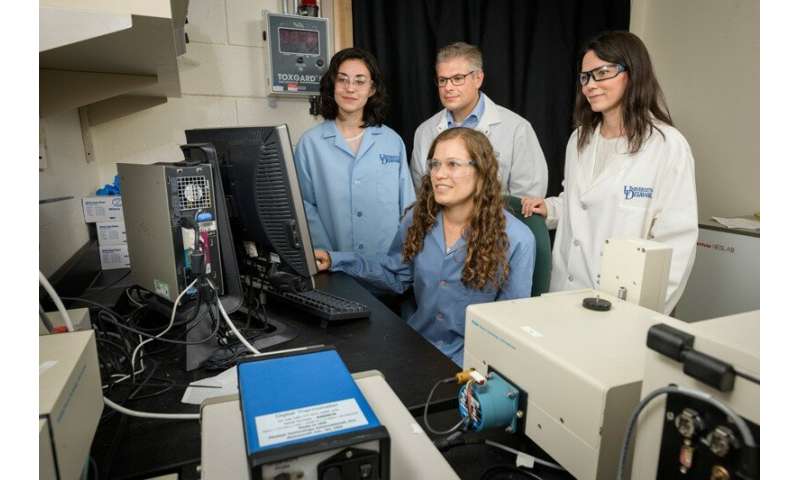 Two University of Delaware researchers have developed a new approach to attack cancer, using two light-activated treatments that appear to be more effective together than when applied independently. More research is needed, but the findings point to promising new approaches against an especially challenging kind of cancer—triple negative breast cancer—which was the focus of their recent studies.

Now UD researchers Emily Day, assistant professor of biomedical engineering, and Joel Rosenthal, associate professor of chemistry and biochemistry, and their labs have shown that a combination of two minimally invasive therapies could give doctors a more powerful weapon against this cancer as well as others.

Both treatments are activated by near-infrared wavelengths of laser light, but each accomplishes its mission differently. One—called photodynamic therapy (PDT)—uses light-sensitive agents called photosensitizers to produce a lethal form of oxygen (singlet oxygen) to accomplish a combustion-like destruction of the cancer cells. The other therapy—called photothermal therapy (PTT)—uses light-sensitive gold nanoshells that heat up when irradiated with light and can essentially ‘cook’ cancer cells to death.

Because the cancer-killing effects of these treatments are achieved only when the photosensitizers or nanoshells are combined with light at the tumor site, both phototreatments can be directly and selectively applied to tumor sites and cancerous tissues. As a result, they are expected to show fewer side effects than more conventional radiation or chemotherapy treatment options.

“Photodynamic and photothermal therapy are not new concepts and there are probes and nano-based materials that have been developed and used for such applications, but there are limitations and drawbacks associated with those existing systems,” Rosenthal said.

Some are not effective in deeper tissue because the necessary light cannot reach it, while others can damage white blood cells or cause problems in other nearby healthy tissue.

When used together, though, the UD team found that these treatments show powerful synergy, meaning they provide greater than an additive therapeutic effect when compared to the individual treatments. Together, they required lower dosages and produced more natural cell death (apoptosis) than the kind of cell death caused by injury or disease (necrosis). The latter, which can often trigger harmful inflammation and lead to recurrence of disease is a cell death mechanism that Day and Rosenthal were actively trying to avoid.

This dual approach has not been used in clinical trials yet and more research is needed before that step can be taken. The agent used in the photothermal therapy is already in use in clinical trials, Day said. But the PDT agent—a water-soluble biladiene complex synthesized in Rosenthal’s lab—is new.

The connection between these two UD labs started about two years ago when Day heard a presentation by one of Rosenthal’s doctoral students, Andrea Potocny, during the Biomedical Engineering Graduate Student Seminar Series. Potocny was discussing efforts to develop water-soluble molecules to use in photodynamic therapy.

Photodynamic therapy (PDT) works by turning the regularly stable oxygen molecules (triplet) within a cell into a more energetic form (singlet) that rapidly reacts with and degrades organic material. This therapy has been used to kill viruses and bacteria and treat some kinds of malignant cancers.

Rosenthal’s lab had developed a complex that would produce the toxic singlet oxygen that could trigger destruction of cancer cells. They needed a water-soluble molecule that could be used in a real tumor in its regular biological context.

Day, whose lab was working with nanoparticles for photothermal therapy (PTT), realized she could help. She had extensive experience working with models of triple-negative breast cancer with which to test the new PDT approach, as well as examine its combined application with PTT.

It was a remarkable success – a hat trick of advances, including easy preparation, biological compatibility and excellent potency. The new biladiene complex was effective in a small dose and had a much higher phototoxicity score than PDT agents in current use.

Upon demonstrating that the biladiene PDT agent developed by the Rosenthal lab was both extremely safe and effective, another question emerged – what would happen if they combined the photodynamic therapy with the photothermal therapy?

To combine the two approaches, the labs used nanoshells (silica spheres coated with thin, gold shells) to enable photothermal therapy and used the biladiene photosensitizer developed by the Rosenthal lab to enable photodynamic therapy. The treatments were applied either independently or together to cell culture models of triple-negative breast cancer, and their safety and efficacy were then examined.

“When we were testing the treatments, out of the blue I noticed that when we put them together it was more effective at killing cells than each on their own,” she said. “I went and talked to Rachel [Riley] in the lab about it and she was surprised. I asked her if I did something wrong and she said, ‘No! If it’s working synergistically, that’s really good!'”