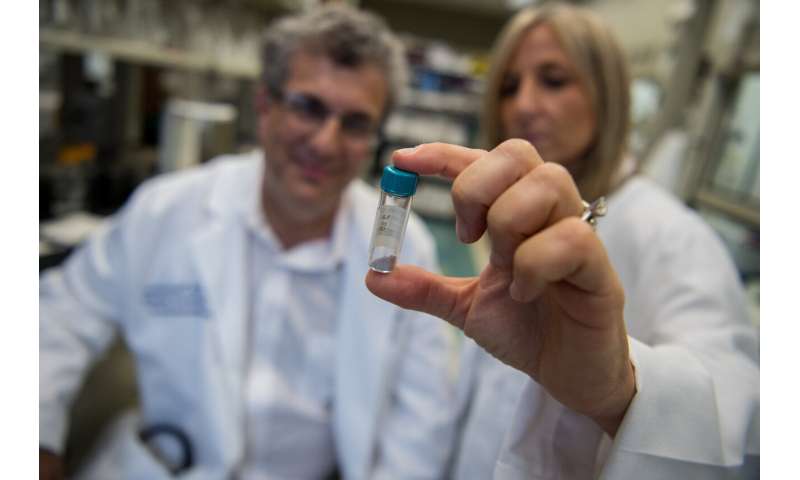 The drug, a “prodrug” version of the glutamine antagonist DON, was designed so that the active form of the drug is functional within the tumor. In theory, this compound could be used across a wide spectrum of cancer types, says Jonathan Powell, M.D., Ph.D., associate director of the Bloomberg~Kimmel Institute for Cancer Immunotherapy at the Johns Hopkins Kimmel Cancer Center, and colleagues due to the critical role of glutamine in promoting the metabolism necessary for prodigious tumor growth.

Their study, published online Nov. 7 in Science, reveals surprising differences in the metabolic pathways fueling cancer cells and effector T cells, pathways that were thought previously to be very similar. These differences could be exploited as a “metabolic checkpoint” in treating cancer, Powell says.

“By targeting glutamine metabolism, we were not only able to inhibit tumor growth and change the tumor microenvironment, but also alter the T cells in a way that we markedly enhanced immunotherapy for cancer,” he says.

Although glutamine metabolism is a component of all cells of the body, the DON prodrug selectively targeted tumor cells because they are the “hungriest” for glutamine, said Powell. “What’s emerging in metabolic therapy—and to me this is why it’s incredibly exciting—is that a treatment like ours becomes selective because it preferentially affects the cells that have the greatest demand.”

“In the beginning, our thought was that if we could target tumor metabolism, we could achieve two goals: slow tumor growth and alter the tumor microenvironment,” says Powell. The tumor microenvironment—the cells, blood vessels and nutrients in the vicinity of tumors—is very hostile to the immune response because it is usually acidic, hypoxic and nutrient-depleted. “This immune shield that the tumor creates around itself is in a sense a direct result of tumor metabolism,” he says.

In mice, treatment with JHU083 led to a significant decrease in tumor growth and improved survival in many different cancer models, by derailing tumor cell metabolism and its effects on the tumor microenvironment, the research team found. In a number of the mice, treatment with JHU083 alone led to durable cures. These cures were facilitated because the metabolic therapy unleashed the natural anti-tumor immune response. When the researchers reinjected these cancer-free mice with new tumors, they found that almost all the mice rejected the new tumor, suggesting that the JHU083 treatment had produced a powerful immune memory to recognize and attack the new cancer.

They also treated the mice with JHU083 and an anti-PD-1 checkpoint inhibitor, a type of immunotherapy drug that removes restraints cancer cells place on immune cells. “Initially, we thought we would need to use the two therapies sequentially in order to avoid any potential impact of the metabolic therapy on the immunotherapy,” says Powell. “Remarkably, however, it turned out that the combined treatment worked best when we gave them simultaneously.” Concurrent treatment with the drugs produced improved anti-tumor effects compared with anti-PD-1 therapy alone.

“We found that JHU083 was having a very positive, very direct effect on the immune cells, and we had to investigate why,” Powell said.

After analyzing and comparing gene expression in the treated tumor cells and a type of immune cell called effector T cells, Powell and colleagues noted differences in gene expression related to metabolism, which allowed them to guess at how the T cell was fueling itself compared with the tumor.

They found some similarities, but fundamentally the metabolic programming of tumor cells and the effector T immune cells was quite different, and it is those differences the researchers exploited by giving the glutamine-blocking drug.

The differences allowed the effector T cells to respond to the glutamine blockage by producing long-lasting, highly effective tumor-infiltrating T cells that seemed to be invigorated rather than exhausted in the tumor microenvironment. “By blocking glutamine metabolism, we were making these cells more persistent, more like an immune memory cell,” Powell noted.

The group also demonstrated that treating the tumors with JHU083 enhanced the efficacy of adoptive cellular therapy, a type of immunotherapy in which immune T cells are collected and grown in large numbers in the laboratory before being given to patients to boost the immune response against cancer. These findings suggest that this new approach may also be used to enhance a promising type of adoptive cell therapy called CAR-T. In future studies, Powell and colleagues want to examine how JHU083 combines with different types of immunotherapy to explore whether certain tumors can overcome the metabolic trap laid by JHU083.