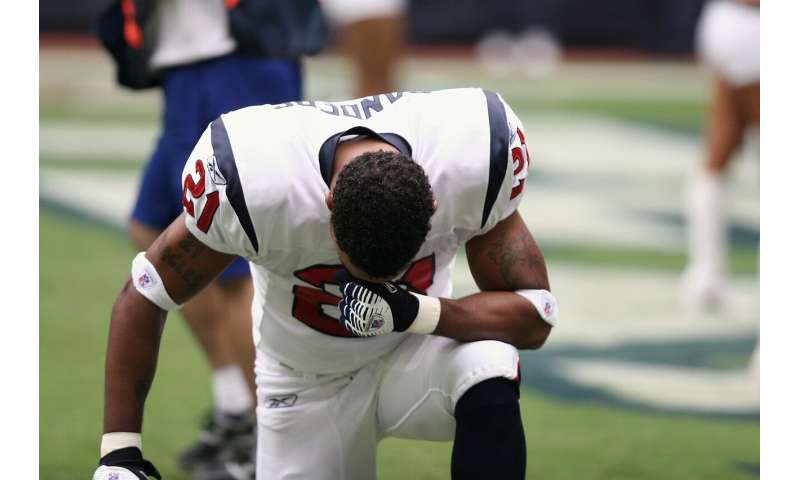 The researchers also found the more years of tackle football played (across all levels of play), the higher the tau protein levels detected by the PET scan. However, there was no relationship between the tau PET levels and cognitive test performance or severity of mood and behavior symptoms.

“The results of this study provide initial support for the flortaucipir PET scan to detect abnormal tau from CTE during life. However, we’re not there yet,” cautioned corresponding author Robert Stern, Ph.D., professor of neurology, neurosurgery and anatomy and neurobiology at Boston University School of Medicine (BUSM). “These results do not mean that we can now diagnose CTE during life or that this experimental test is ready for use in the clinic.”

CTE is a neurodegenerative disease that has been associated with a history of repetitive head impacts, including those that may or may not be associated with concussion symptoms in American football players. At this time, CTE can only be diagnosed after death by a neuropathological examination, with the hallmark findings of the build-up of an abnormal form of tau protein in a specific pattern in the brain. Like Alzheimer’s disease (AD), CTE has been suggested to be associated with a progressive loss of brain cells. In contrast to AD, the diagnosis of CTE is based in part on the pattern of tau deposition and a relative lack of amyloid plaques.

The study was conducted in Boston and Arizona by a multidisciplinary group of researchers from BUSM, Banner Alzheimer’s Institute, Mayo Clinic Arizona, Brigham and Women’s Hospital and Avid Radiopharmaceuticals. Experimental flortaucipir PET scans were used to assess tau deposition and FDA-approved florbetapir PET scans were used to assess amyloid plaque deposition in the brains of 26 living former NFL players with cognitive, mood, and behavior symptoms (ages 40-69) and a control group of 31 same-age men without symptoms or history of traumatic brain injury. Results showed that the tau PET levels were significantly higher in the former NFL group than in the controls, and the tau was seen in the areas of the brain which have been shown to be affected in post-mortem cases of neuropathologically diagnosed CTE.

“Our findings suggest that mild cognitive, emotional, and behavioral symptoms observed in athletes with a history of repetitive impacts are not attributable to AD, and they provide a foundation for additional research studies to advance the scientific understanding, diagnosis, treatment, and prevention of CTE in living persons, said co-author, Eric Reiman, MD, Executive Director of Banner Alzheimer’s Institute in Phoenix, Arizona. “More research is needed to draw firm conclusions, and contact sports athletes, their families, and other stakeholders are waiting.