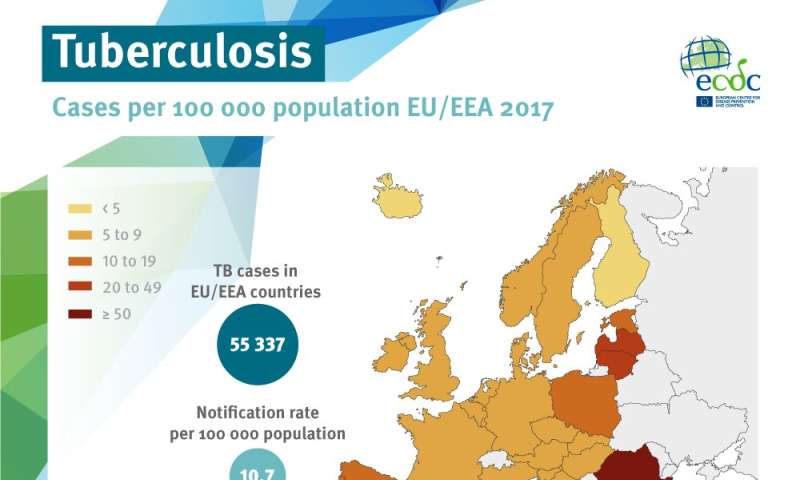 The latest ECDC-WHO report Tuberculosis surveillance and monitoring in Europe 2019 (2017 data) shows that despite an overall decline in numbers of people suffering from TB, the disease remains a major public health challenge in the Region. Of the 275 000 new diagnoses and relapses, an estimated 77 000 people are suffering from difficult-to-treat multidrug-resistant TB (MDR-TB). The European Union and European Economic Area (EU/EEA) countries fare better, with only 1 041 people reported to have MDR-TB. However, most countries in the Region, including many in the EU/EEA, struggle to treat patients successfully.

Dr. Vytenis Andriukaitis, European Commissioner for Health and Food Safety, said: “Even though tuberculosis is an ancient, preventable and curable disease, it still causes too much suffering and death to many people in the European Union and beyond. TB was high on the global agenda in 2018 and world leaders committed to mobilise efforts towards ending it. This momentum must be used to tackle tuberculosis from all angles and at all levels. The Commission has pledged its commitment to support the EU Member States towards reaching the goal of ending TB by 2030 as part of the wider Sustainable Development Agenda. Even though we are on the right track, sustained efforts centred on people are paramount to achieve a tuberculosis-free Europe and the world.”

ECDC Director Dr. Andrea Ammon believes in the capacity of the EU/EEA to improve: “We can end TB by 2030. However, as the burden in the region varies greatly, we will need to tailor approaches on a country-by-country basis. ECDC will continue to offer tailored country support and coordinate efforts across borders.”

“TB is preventable and curable; the time to take action is now to end TB by 2030. If we don’t act rapidly and decisively, the drug-resistant forms of the disease will increase their hold on Europe. Despite the challenges and threats that we face, I believe that Europe has the full potential to lead the way. We have science and technology, skilled health professionals and high level political commitment to leaving no-one behind—we have got what it takes to end TB”, said Dr. Zsuzsanna Jakab, WHO Regional Director for Europe.

The recent United Nations High-Level Meeting on TB, held in September 2018, brought hope to the world as global leaders stepped up their commitment to end TB by 2030, in line with the Sustainable Development Goals (SDGs). This political commitment now needs to be translated into action to end TB.

Up until now, an MDR-TB diagnosis spelled the start of a gruelling two-year treatment plan for patients. New WHO recommendations for the treatment of MDR-TB involve safer and more effective drugs with reduced chances of severe side effects and a new treatment regimen for increased effectiveness.

Proper and fast diagnosis of TB is essential. The sooner a patient is diagnosed, the faster their treatment can begin, easing suffering and preventing further disease transmission. The new report indicates that just over half of all newly notified TB patients were tested using WHO-recommended rapid diagnostic tests. To improve diagnoses and ensure appropriate treatment approaches, it is also important to have capacity at country level to rapidly detect drug-resistant TB.