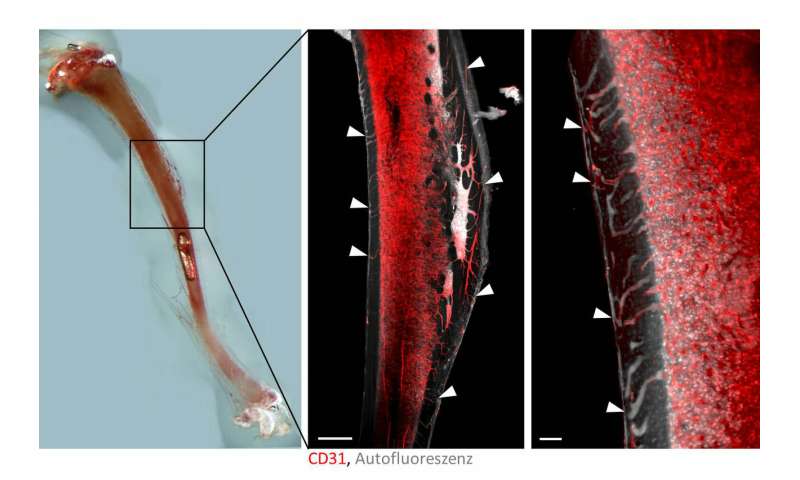 A network of very fine blood vessels that connects bone marrow directly with the blood supply of the periosteum that was previously overlooked has now been discovered by Dr. Anika Grüneboom, a young researcher who is now working at Universitätsklinikum Erlangen. She made this groundbreaking discovery while working on her doctoral thesis at Universität Duisburg-Essen (UDE) with Prof. Dr. Matthias Gunzer. Researchers from Universitätsklinikum Essen, Friedrich-Alexander-Universität Erlangen-Nürnberg (FAU) and research institutes in Jena, Berlin, Dresden and Bern were also involved in the study.

Although bones are very hard organs, they also have a dense network of blood vessels inside them where the bone marrow is located as well as on the outside that is covered by the periosteum. This is why bone fractures often cause serious bleeding. However, new blood cells can also leave the bone marrow via this system of vessels and enter the body.

“As with every organ, bones need a closed bloodstream for these functions. While fresh blood is transported into organs via arteries, veins transport the ‘used’ blood back out again. The precise structure of this closed bloodstream in long bones was not clear up to now,” explains Dr. Anika Grüneboom, Department of Medicine 3—Rheumatology and Immunology at Universitätsklinikum Erlangen.

Over one thousand blood vessels in some places

The group of researchers have now found thousands of previously unknown blood vessels in the bones of mice that traverse perpendicularly across the entire length of the compact bone, the so-called cortical bone. The researchers have named them ‘trans-cortical vessels’ (TCVs) for this reason. Furthermore, they were able to demonstrate that the majority of both arterial and venous blood flows through this newly discovered system of vessels. This means that the system is a central component for supplying bones with oxygen and nutrients.

In addition, the researchers discovered that the newly-discovered system of vessels is used by the immune cells in bone marrow to reach the bloodstream. In the case of inflammatory diseases such as arthritis, it is especially important that immune cells reach the source of the inflammation quickly.

“This network of blood vessels in the bone is similar to an underground train system that is able to successfully transport large numbers of passengers quickly and directly through barriers,” explains Dr. Grüneboom.

Lead researcher Prof. Gunzer adds: “The previous concepts only described a few single arterial canals and two venous canals in bones. This is completely inaccurate and does not reflect the actual situation at all. It is quite surprising that we can still find new anatomic structures in the 21st century that are not found in any textbooks.”

The discovery was possible due to a unique combination of modern imaging methods explains Prof. Gunzer: “Many of these methods were used for the very first time by us such as so-called light-sheet fluorescence microscopy and ultra high-resolution 7 tesla (T) magnetic resonance imaging and X-ray microscopy in collaboration with the ERC Synergy Grant 4-D-nanoSCOPE team under the leadership of Prof. Dr. Silke Christiansen and Prof. Dr. Georg Schett.”