Home » Health Problems » Are there Zika reservoirs in the Americas? 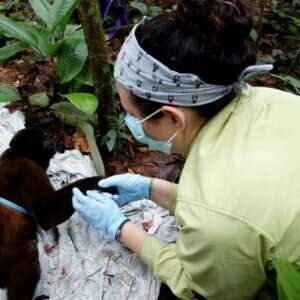 Most emerging infectious diseases affecting people are zoonotic—they make the jump from other animals to humans. Transmission, however, is a two-way street. These zoonotic diseases can also jump from humans to other animals. Even if a disease is eradicated in humans, it can live on in animals that act as reservoirs, ensuring that the risk of human infection is never entirely eradicated.

In an attempt to discern this risk for the Zika virus, a team of researchers co-led by an anthropologist from Washington University in St. Louis are trying to determine whether nonhuman primates in South America have been infected with the disease, which first showed up in humans there in 2015. But first they need a noninvasive way to test the animals for the virus.

“These animals could be reservoirs and humans could then become infected with the virus from the animals,” said Krista Milich, assistant professor of biological anthropology in Arts & Sciences.

This happens in related viruses, she said. “There are feedback cycles, where humans are being exposed through non-human primate reservoirs,” said Milich, who along with Benjamin Koestler, a postdoctoral fellow in molecular biosciences at the University of Texas, Austin, led the study recently published in PLOS One. The researchers determined that the Zika virus can be detected using feces samples.

The virus can be found in a host of bodily fluids: semen, urine, blood and saliva. Getting those samples, however, requires capturing the animals; a risky proposition for all primates involved.

The easier option would be to test for the virus in feces, but only one research team has reported success in doing so, and that team did not publish its methods. “Ours goes on to provide the method used so people can follow it if they want,” Milich said.

It’s not surprising that there is not yet a method for collecting the virus in feces. Although Zika has been present in Africa and Asia since the 1940s, researchers hadn’t been looking for it in the Americas until it arrived around 2015. Once researchers did start to look for the virus in the Americas, the tests available were of other fluids, not feces.

That, Milich said, is because wildlife research is often “limited by what assays and what methods have been developed for humans.” And for humans, she said, “you’re not going to ask for a fecal sample when you can take a blood sample.”

The team also wasn’t sure if it would be possible for another reason. “RNA viruses can be fragile,” Milich said, referring to viruses, such as Zika, which have RNA as genetic material, as opposed to DNA.

“That’s the reason we weren’t sure if we’d be able to detect it,” she said. “In feces, the body is breaking things down. … And you have a lot more contaminants. In order to measure things in feces, you have to deal with those contaminants.”

Before heading to the field to test its methods, the team had to make sure its test was accurate. They procured blood, urine, saliva and fecal samples from captive, infected squirrel monkeys that were part of an ongoing study of Zika virus in pregnant monkeys.

Using proven methods, researchers tested the blood, urine and saliva for the virus. They then tested the feces, using RT-qPCR-based assay (More about the methods is available in the paper). The results matched; they were able to detect the virus in feces, though detection time windows varied between different sample types.

The group has now moved on to testing samples from the wild. So far, the researchers have collected multiple samples from nearly 50 animals. The samples are coming from sites as varied as the middle of the Amazon, where people aren’t around and there shouldn’t be Zika infections, Milich said, to, unfortunately, animals that had previously been kept as pets.

“We’re looking for diversity,” Milich said, “not just in terms of countries and species, but also in how close the animals are in proximity to humans.”

As of February, the team had collected samples from Ecuador, Colombia and Brazil.

Ideally, Milich said, people should not be keeping monkeys as pets, nor should they be hunting monkeys, either. “In fact, you have a greater risk of sharing diseases with animals when you’re either living in close proximity with them or when coming into contact with their body fluids, which is what happens when you kill them,” she said, adding that this was how zoonotic diseases such as HIV spread to humans.