Zapping older people’s brains could sharpen their memories to be as good as those of people decades younger.

Scientists found stimulating a certain part of the brain boosted the memory of over-64s who had normal age-related memory loss.

It worked so well the researchers saw no difference in the test results of volunteers who’d had the therapy and younger, healthier adults.

The findings are the latest in a long line of medical trials to delve into the benefits of electrical stimulation on the brain.

Just two weeks ago a similar study found zapping the brains of over-60s can restore their memory power to that of people in their twenties. 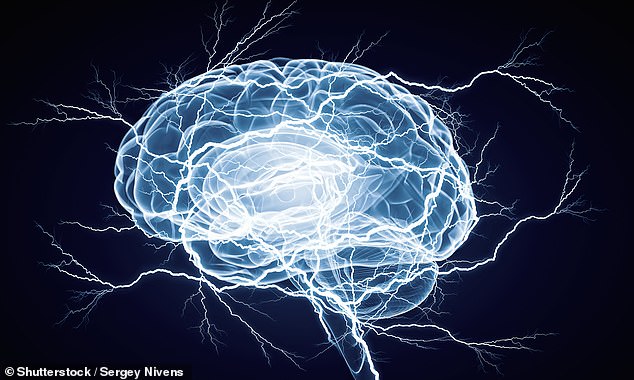 Electrical stimulation worked so well in a trial the lead investigator said there was no difference in the test results of people who’d had the therapy and younger, healthier adults (stock image)

Scientists at Northwestern University in Illinois tested the effects of using electrical currents targeted at the brain’s hippocampus.

Their 16 participants were aged between 64 and 80 years old and had normal levels of memory problems for their age.

After five days of having their brain zapped with low-level electrical currents for 20 minutes per day, their memory ability was on par with people years younger.

‘Older people’s memory got better up to the level that we could no longer tell them apart from younger people,’ said the lead investigator, Dr Joel Voss.

‘They got substantially better.’

Before the electric therapy – called transcranial magnetic stimulation (TMS) – the over-64s performed 15 per cent worse in memory tests than 18 to 34-year-olds.

In the first round they scored 40 per cent in computer-based tasks which required them to remember specific, made-up relationships between objects in a test.

Younger participants scored 55 per cent in the previous research, but the scores were equal after the TMS therapy.

The TMS increased activity in the parietal lobe, which controls the hippocampus – it can not be stimulated directly because it is too deep inside the organ.

Forming new memories, learning, and emotional control are all functions influenced by the hippocampus, which the scientists targeted just above the left ear.

HOW COULD ZAPPING THE BRAIN BOOST MEMORY?

All activity in the brain, including the formation and retrieval of memories, is controlled by electrical impulses.

If these electrical signals are interrupted or reduced it could affect someone’s ability to make new memories or remember old ones.

Researchers in one study by Boston University – published this month in the journal Nature Neuroscience – found older people’s brainwaves were out of rhythm between two parts of the brain which control the short-term memory.

When the areas of the brain – the temporal lobe and prefrontal cortex – were stimulated with electric currents, the researchers said, these brainwaves could be synchronised, potentially improving memory formation.

Alzheimer’s disease occurs when proteins build up in the brain and cause nerve damage, reducing how well vital electrical signals travel through the brain.

Therefore, finding new ways to encourage activity in the brain – which slowly dies and breaks down in dementia patients – could help to restore function or slow down decline.

In research they published last year, Dr Voss and his team tried the same therapy – delivered using a metal coil placed against the scalp – on 16 under-34s without memory problems, who they used as a comparison in this research.

They found the participants’ ability to remember details in photos improved for at least 24 hours after the procedure.

Dr Voss isn’t sure how long the effects could last, but hope to test it in people with mild cognitive impairment – a precursor to Alzheimer’s disease.

At the time he said: ‘If you think about the brain’s memory network as generating one unit of activity every time it tries to memorize a picture, brain stimulation made it so that now the same type of picture would generate two units of activity.

‘This increase in activity means stimulation enhanced excitability – and that’s important because excitability is a marker for good memory formation.’

In spot-the-difference tests sexagenarians performed just as well as the twenty- somethings after having the temporal and prefrontal parts of their brains stimulated.

That research was done by Boston University, where researchers said it could lead to a headset to ‘turbo-charge’ older people’s failing memories.

Brainwaves connecting different parts of the brain were found to be out of sync in older people, but then synchronised again by the electric currents.

Dr Robert Reinhart, who led the study, said: ‘These findings are important because they not only give us new insights into the brain basis for age-related working memory decline.

‘But they also show us that the negative age-related changes are not unchangeable  – that we can bring back the more superior working memory function that we had when we were much younger.’

Today’s research by Northwestern University is published in Neurology, the medical journal of the American Academy of Neurology.