Home » Health News » Would YOU eat at a restaurant where all the staff have dementia?

Would YOU eat at a restaurant where all the staff have dementia? Our Mail on Sunday reporter tried it out…

Tapping my pin number into the terminal to pay for lunch, I notice my waitress Sue hovering. Quick as a flash, she says: ‘I’ll turn away but you don’t have to worry. I won’t remember the number anyway.’

Moments earlier, she had carefully entered the cost of my meal, totalling £23, into the machine, and bravely confessed she had forgotten how to add up – a devastating admission for a 62-year-old former sales rep who was once used to working with numbers.

Welcome to The Restaurant That Makes Mistakes, staffed entirely by dementia sufferers. The pop-up venue – a former Bristol fire station – was open for five weeks in December under the watchful eye of award-winning chef Josh Eggleton. 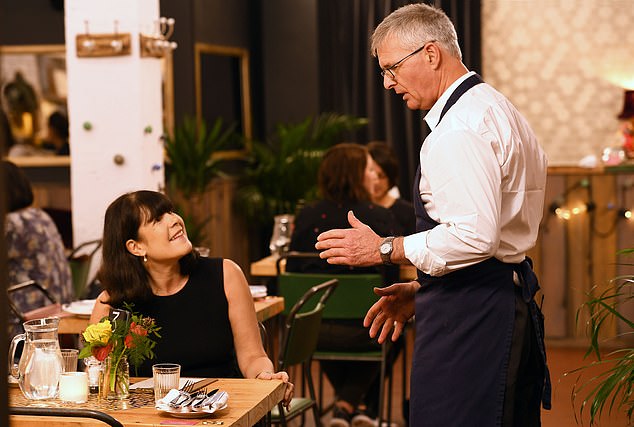 Service with a smile: Claudia Joseph and maitre d’ Peter at the restaurant

Inspired by a similar restaurant that opened in Tokyo in 2017, the UK’s version was set up by Channel 4 in an effort to change how the condition is viewed.

Staffed by, among others, a renowned obstetrician and gynaecologist, a nurse and an electrician, the project will serve as a stark reminder that the devastating disease can strike anyone, at any age.

And the number of people living with the condition is increasing every year.

The show’s creators believe there needs to be a wider conversation about how we think about people living and working with dementia because, as one participant said: ‘We’re not on the scrapheap yet.’

Along with members of the public and a host of celebrity diners, including Downton Abbey star Hugh Bonneville, an Alzheimer’s Society supporter, and Countdown’s Rachel Riley, I was lucky enough to be invited along to see what this unique and remarkable social experiment was all about. And far from being a maudlin experience, I found a room full of jollity and met a number of fascinating individuals with a zest for life.

I must admit, beforehand I had my reservations. Eggleton’s menu looked wonderful – three courses, each offering three choices – but I wondered how staff would cope. After all, they were doing every job, from front-of-house to cooking. Would the food be edible? Would I end up with no starter and three puddings?

I was greeted by maitre d’ Peter, a 53-year-old former sawmill owner from Suffolk. He was diagnosed with Alzheimer’s three years ago and now struggles to read or write. He showed me to my seat and checked that my table ‘passed the wobble test’. So far so good.

While Peter and waitress Sandie, 54, clearly had problems with their memories, they retained their old-fashioned manners, camaraderie and sense of humour. When Bonneville arrived, Peter turned to mortgage adviser Sandie and asked: ‘Is he somebody we should know? Who is he?’

My waitress was Joy, 60, a former nurse from Manchester, who diligently wrote my order into her notebook. She was diagnosed with Alzheimer’s on her 55th birthday and suffers short-term memory loss – the notebook acts as a practical aid.

I chose wild mushroom and lovage on toast with pickled walnut and black garlic ketchup to start, followed by baked cod with seaweed butter, parsley barley risotto and sea vegetables. After I’d polished off my delicious starter, Peter came to clear my plate and asked: ‘Have you seen the dessert menu?’

‘I’m going to have my main course first,’ I laughed.

‘It’s better than not asking at all,’ he said, quick off the mark.

The programme comes after a pilot scheme by Sainsbury’s to install ‘relaxed’ checkout lanes, training staff to spot the symptoms of dementia, and allowing sufferers to pay for their shopping at a slower pace. The firm was also hailed last year for allowing a 61-year-old grocery picker to keep her job after her Alzheimer’s diagnosis.

Sarah Lazenby, Channel 4’s head of features and formats, says: ‘A dementia diagnosis doesn’t, and shouldn’t, mean the end of a career.’

The 14 participants all worked between ten and 15 hours a week, spread over four or five days. No one worked for more than five hours a day to prevent fatigue.

Dr Zoe Wyrko, a consultant geriatrician and associate medical director at Birmingham’s Queen Elizabeth Hospital, who acted as a consultant for the programme, says: ‘The message we’ve got from our volunteers is that they often feel forgotten or on the scrapheap.

‘We want employers to realise that just because someone has been diagnosed with dementia, it doesn’t mean they can’t work.’

Jeremy Hughes, chief executive at the Alzheimer’s Society, which is supporting the programme, adds: ‘Life doesn’t end when dementia begins. Society needs to unite and support everyone affected.

‘A huge part of this involves people with dementia being empowered to live the life they want in their community – and this includes having the right to work as long as they are able to do so.’

It was clear from my visit that these wonderful people are still highly capable and have so much to offer society. I hope, with their confidence boosted by their time in the restaurant, they will be given the chance – if they want it – to work until they decide otherwise.

It is known for making Popeye’s muscles bulge, but spinach may also be good for the brain. Pensioners who regularly eat spinach and other leafy greens stay sharper for longer, say researchers from Rush University, Chicago.

They asked 950 men and women, with an average age of 81, to do mental tests every year for the next decade, and the brains of those who ate the most leafy veg aged less. It is thought high levels of Vitamin K, beta-carotene and folate were behind the boost.

The bloggers: Personal trainer and nutritionist Alex and Lauren, a yoga fan and former vegan, met on a Tinder date. They debunk fad diets and promote ‘healthy living from the inside out’.

What’s it all about? Alex and Lauren, left, believe the quality of food is more important than the calories it contains and say there is no one-size-fits-all diet. Log on for health tips, exercise videos and recipes from budget freezer meals to healthy packed lunches.

Do Northerners feel the cold less than ‘soft Southerners’?

Professor Mike Tipton, of Portsmouth University, says: ‘The body can acclimatise to cold temperatures – open-water swimmers are a good example. Routinely going out without warm clothing would have the same effect, perhaps explaining how “Newcastle guy” can leave his jacket behind on a night out, even in winter. But, in general, temperature differences between the North and South of the UK aren’t great enough for our bodies to adapt.’