Women who put in long hours at work are prone to depression – but the same is not true of men, researchers have found.

A study found women who worked more than 55 hours per week were more likely to suffer depression than women working a standard 35- to 40-hour week.

The researchers suspect the gender difference is down to the fact that even when women have left work, they are left with the burden of chores around the home. 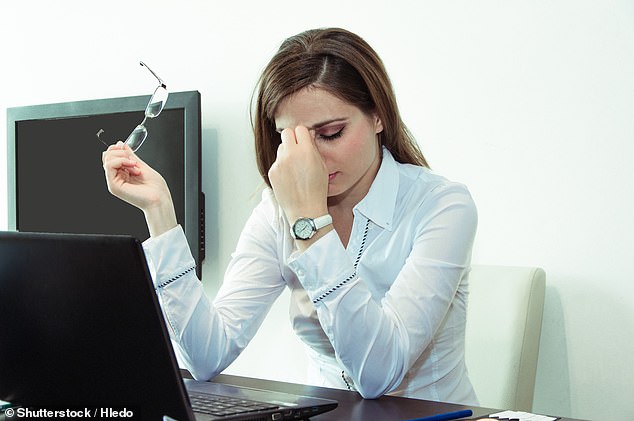 Those who worked more than 55 hours per week had more symptoms of the condition than women working a standard 35- to 40-hour week, the study found

‘Although we cannot establish the exact causes, we do know many women face the additional burden of doing a larger share of domestic labour than men, leading to extensive total work hours, added time pressures and overwhelming responsibilities,’ she said.

‘We hope our findings will encourage employers and policy-makers to think about how to reduce the burdens and increase support for women who work long or irregular hours – without restricting their ability to work when they wish to.

HOW DOES STRESS AFFECT PREGNANCY?

The combination of high stress and air pollution also increases the risk of having a low-birth weight baby, the research adds.

Senior author Professor Tracey Woodruff, from the University of California, San Francisco, said: ‘It appears that stress may amplify the health effects of toxic chemical exposure, which means that for some people, toxic chemicals become more toxic.’

Co-author Professor Rachel Morello-Frosch, from the University of California, Berkeley, added: ‘The bottom line is that poverty-related stress may make people more susceptible to the negative effects of environmental health hazards, and that needs to be a consideration for policymakers and regulators.’

The researchers analysed 17 human studies and 22 animal trials that investigated the link between stress, chemicals and foetal development.

Stress was defined by factors such as socioeconomic status.

Professor Morello-Frosch added: ‘While the evidence on the combined effects of chemicals and stress is new and emerging, it is clearly suggestive of an important question of social justice.’

‘More sympathetic working practices could bring benefits both for workers and for employers – of both sexes.’

The researchers also found that married women with children at home tended to be less likely to work long hours than single women – but married fathers were more likely to put in overtime at the office than men with no family.

They used data from more than 23,000 British adults tracked since 2009 for the study, published in the BMJ Journal of Epidemiology and Community Health.

They found women who worked longer than 55 hours a week had 7.3 per cent more depressive symptoms, such as feeling worthless or incapable, than women working standard hours.

Weekend working was linked to a higher risk of depression among both men and women.

Women who worked for all or most of the weekend had 4.6 per cent more depressive symptoms on average than women working only weekdays.

Among men, this figure was 3.4 per cent.

Men tended to work longer hours than women, with almost half clocking up more than 40 hours a week, compared with fewer than one in four women.

Nearly half of the women worked part time, compared with just one in seven men.

The researchers wrote: ‘Our findings of more depressive symptoms among women working extra long hours might also be explained by the potential double burden experienced by women when their long hours in paid work are added on their time in domestic labour.

‘Previous studies have found that once unpaid housework and caring is accounted for, women work longer than men, on average, and that this has been linked to poorer physical health.

‘Our findings should encourage employers and policy makers to consider interventions aimed at reducing women’s burdens without restricting their full participation in the workforce, and at improving psychosocial work conditions.’