Maria Marzaioli, 43, says her skin became so hot after she suffered an adverse reaction to beer she drank on holiday that she “could have fried an egg on her neck”.

She woke up one day during a trip to Tuscany in Italy with her eyes and face swollen – which she believes was a result of wheat beer she drank the night before.

The itching was so extreme that she completely shaved off her long hair to try to ease the irritation.

Maria’s skin was so irritated she would awaken with “blood all over her sheets” from scratching during the night. 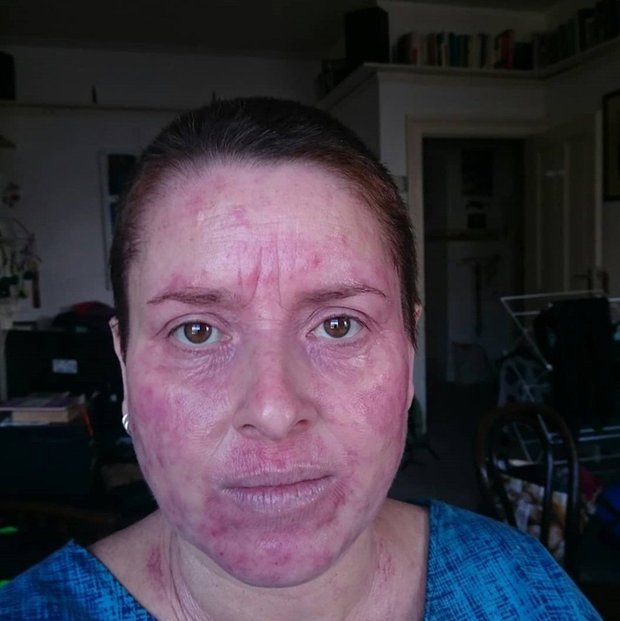 “Red patches spread everywhere, and I was incredibly hot and itchy. You could have fried an egg on my neck”

As a youngster, Maria suffered with occasional and very manageable eczema patches here and there.

From about the age of 21, Maria started to use a type of steroid cream called hydrocortisone every few years when her skin became very sore.

But then during the trip to Tuscany in 2015, she woke one morning with her eyes and face swollen and horrendously itchy.

Maria recalled: “I’d drank a wheat beer the night before and woke in the morning with my face and eyes swollen.

“There was no question in my mind that the beer was the cause.

“It was the only thing I’d had that was significantly different to what I normally ate and drank.

“I also remember having similar reactions a couple of times to wheat beers when I was younger.”

At first, Maria tried to treat her symptoms with antihistamines and moisturiser – but they made little difference.

So after five days she visited a local chemist and bought some hydrocortisone cream. Luckily, she spoke Italian.

After that her symptoms briefly cleared – before returning with a vengeance once she got back to the UK.

She continued: “I went to the doctor and that triggered a cycle of being prescribed steroid creams, them eventually stopping working, then going back to get higher dosage ones.

“My skin was getting worse and worse, dry, red patches spread all down my back, chest and neck.

“My entire top half, aside from my hands, was covered.

“I slept with cotton gloves on and wore compression bandages to try and stop me from itching. I couldn’t even be cuddled because my skin was so sore.

“Before this, I had been giggling regularly and playing the violin in a few different bands, but once it started I found I’d get so hot and sweaty on stage that it prompted uncontrollable itching attacks.

“I’d often have to go straight home and dunk myself into a cold bath, and even had to quit one of the bands, which was devastating.”

Now Maria has opted for a more natural approach: cutting out wheat, dairy, sugar and alcohol and also trying to limit the amount of stress in her life.

Maria, who has been keeping an Instagram diary of her progress in a bid to help others, also spoke candidly about the emotional turmoil of her ordeal.

She said: “I was unprepared for the mental toll that the sheer exhaustion would have on me. It impacted on my life in ways I never considered.

“It’s hard to reconcile when your life changes overnight like that. I found social situations very overwhelming, and relying so much on other people made me depressed and anxious.

“The toughest thing was never knowing if it was going to improve, and surrendering myself to just taking it one day at a time.”