Woman, 53, is the first person with head and neck cancer in the UK to undergo radiotherapy DURING surgery to remove a recurring tumour

A woman has become the first head and neck cancer patient in the UK to undergo radiotherapy during surgery to remove a recurring tumour.

Jayne Garrett, 53, has previously had chemo and radiotherapy, however, her cancer returned in 2015 and again two years later.

In a bid to finally rid herself of the disease, Ms Garrett underwent surgery to remove the mass on April 25 at University Hospital Southampton (UHS).

With the diseased area exposed, medics could administer a ‘focused’ dose of radiation, with less risk of it ‘scattering’ to her healthy tissue.

Ms Garrett, of Salisbury, Wiltshire, is thought to be doing well and has suffered ‘no side effects’ for the first time in her cancer ordeal. 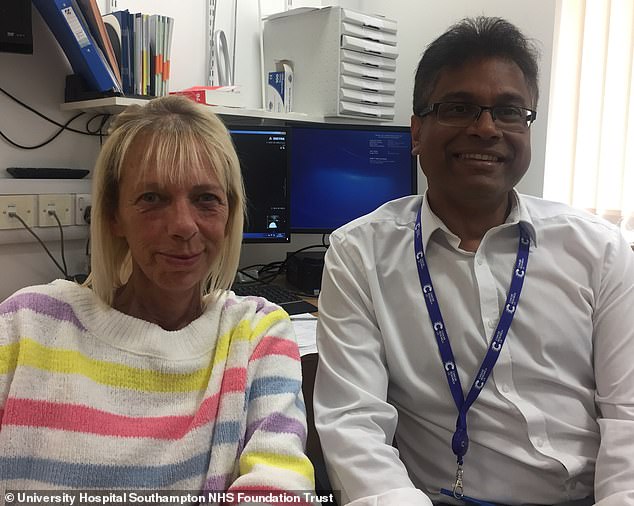 Jayne Garrett is the first person with head and neck cancer in the UK to receive radiotherapy during surgery to remove a recurring tumour. The 53-year-old is pictured after the procedure with Dr Shanmugasundaram Ramkumar, who leads intraoperative radiotherapy at University Hospital Southampton, which is where Ms Garrett went under the knife 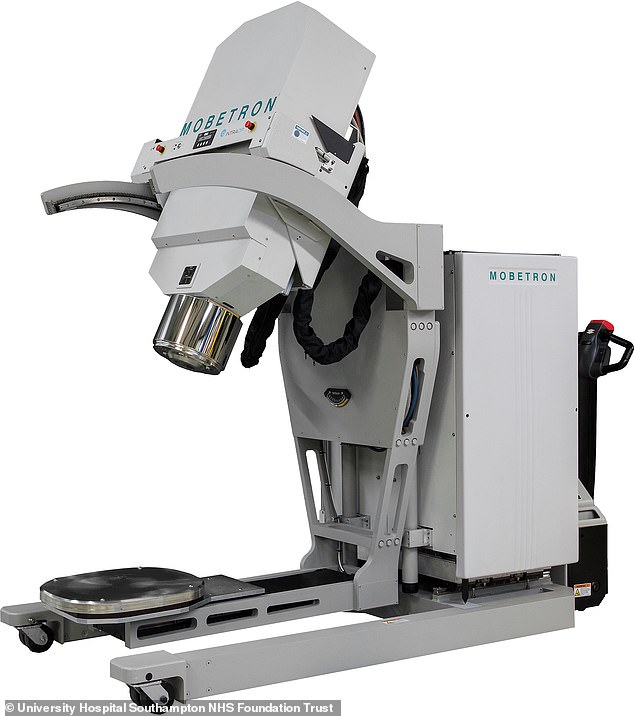 A machine called Mobetron (pictured) delivered ‘intraoperative electron beam radiotherapy’ (IOERT) to the affected area immediately after Ms Garrett’s tumour was removed. This allowed doctors to deliver a ‘focused’ dose of radiation, with less risk of it ‘scattering’ to healthy tissue

Dr Nimesh Patel, a head and neck surgeon who performed the operation, said: ‘For Mrs Garrett, who had previously received standard chemotherapy and radiotherapy, IOERT is an exciting treatment.

‘We believe [it] will reduce her risk of cancer recurrence.’

Head and neck cancer is notoriously difficult to treat. The disease, which affected 11,045 new people in the UK in 2014-2016, has been found to reoccur up to 40 per cent of the time.

Around 65,410 people are expected to develop the condition this year in the US, statistics show.

Surgery to remove these tumours can be ‘as disfiguring as the tumour itself’, according to the Fred Hutchinson Cancer Research Center.

Speaking of recurring cases, Dr Shanmugasundaram Ramkumar, intraoperative radiotherapy lead at UHS, said: ‘These patients have been treated previously with [a] high dose of radiotherapy and re-irradiation.’

Re-irradiation is the repeated administration of radiotherapy to an area that has previously received the same treatment.

This can occur months or even years after the initial dose. Radiotherapy can be re-administered if the area has not exceeded the amount it can tolerate.

‘Due to [the] radiation scattering effects of conventional radiotherapy treatments for head and neck cancer, the risk of damage to sensitive parts of the body such as nerves, muscles or vocal cords is relatively high,’ Dr Ramkumar said.

HOW DOES THE MOBETRON MACHINE WORK?

Mobetron is a machine that delivers a high-dose of radiotherapy immediately after a cancer patient has had their tumour surgically removed.

By using it during surgery, it targets the diseased area while it is exposed.

This lowers the overall dose of radiation the body receives and therefore reduces the risk of side effects.

IORT is also used to prevent tumours reoccurring by ‘killing off’ any remaining cancerous cells.

Due to its dose being precise, Mobetron reportedly takes less time to administer than external beam radiation.

This means the portable machine can be used in any operating room, without the need for special shields.

Mobetron has been used to treat recurrent head and neck, breast, pancreatic, rectal and genitourinary cancers.

It has also been used for gynaecologic tumours and sarcomas, which occur when cancer arises in the connective tissue.

IOERT is reportedly only available in a few cancer centres in the US and Europe.

‘Using IOERT, we can deliver focused radiotherapy and reduce the amount of toxicity for these patients.

‘And we are extremely pleased to have had the option of treating Mrs Garrett with this system.’

IOERT was previously only available in a few cancer centres in the US and Europe, according to Dr Patel.

‘It is indeed a significant moment for the treatment of patients with recurrent head and neck cancer in the UK whose outcomes may improve as a result of this procedure,’ he said.

And Ms Garrett is already feeling better than she did after her other treatments.

‘I was amazed the oncologists and surgeons were able to give me radiotherapy during surgery, cutting out the need for it to be given separately,’ she said.

‘Additionally, with my previous radiotherapy I suffered some significant side-effects such as being unable to produce saliva, but with this treatment I have not suffered from that at all.’

Mobetron was introduced at UHS with the help of the cancer-charity PLANETS, which fundraises for treatments for pancreatic, liver, abdominal and neuroendocrine tumour forms of the disease.

A hospital spokesman said: ‘This is an intensive form of targeted radiation given at the time of surgery to treat a wide variety of advanced cancers that are otherwise difficult to remove and treat.

‘Mobetron is a mini version of a linear accelerator and can send high energy focused electron beams precisely to areas inside the human body immediately after a cancer has been removed.’

A linear accelerator customises high-energy X-rays or electrons to conform to a specific tumour’s shape.

This allows it to destroy cancer cells while sparing the healthy tissue that surrounds the malignant mass.

Mobetron is a portable machine that can be moved between operating theatres to treat patients with pancreatic, neuroendocrine, colorectal, bladder, and head and neck cancers.