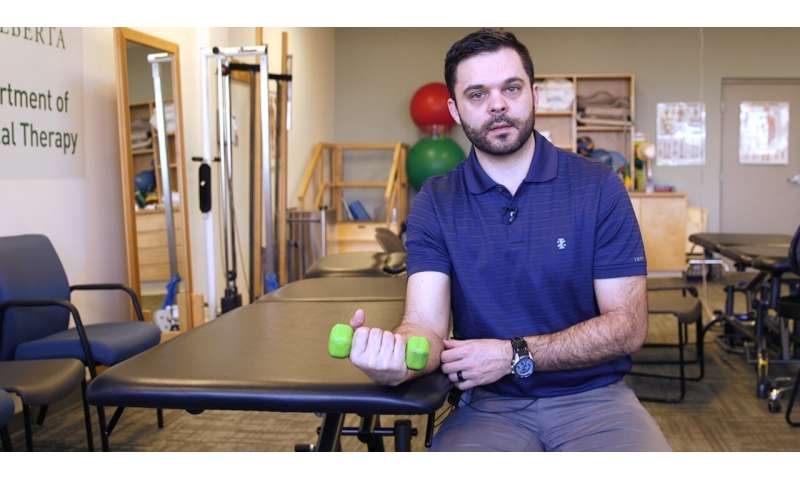 The cure for the repetitive motion injury of the tendons that join the forearm muscles on the outside of the elbow, colloquially known as tennis or golfer’s elbow, is more use.

“With tennis or golfer’s elbow, you need to settle it down and rest it but after that, the best research and evidence points to exercise as the most effective treatment for healing,” said Chris Zarski, a clinical assistant professor in the Faculty of Rehabilitation Medicine at Augustana Campus.

He explained that tennis elbow or lateral epicondylitis, which affects the outside of the forearm at the elbow, and golfer’s elbow or medial epicondylitis, which affects the inside, were believed to be related to inflammation, and thus a form of tendonitis. However, researchers and physicians began to notice these injuries were more often a form of tendinopathy, where the inflammation is a symptom of an underlying problem related to weak or disrupted tendon fibrils.

“This is not not meant to scare anyone, but they were finding the structure of the tendon itself actually changed and degenerated a little bit,” he said. “It’s usually related to strength, flexibility or the mechanics of a motion the body is not prepared to tolerate, so the tendons get overworked and overstressed, and cause the pain.”

Not just from tennis or golf

Zarski said golfer’s and tennis elbow are seldom caused by actually playing golf or tennis. Any activity that requires repetitive arm movements, like typing or working with tools, can cause the debilitating elbow pain, as can participating in heavy tasks such as weightlifting or overdoing it in an activity after being largely sedentary, like painting your home over a long weekend.

“You have to listen to your body and take regular breaks when doing any sort of repetitive or heavy task,” he said. “Also, be sure to change up the task, don’t push through the pain and be sure to maintain good body mechanics.”

He also suggested general stretching of the forearms before the task and semi-regularly.

However, once the damage is done and especially if there is acute pain, he said the best thing to do is follow the PRICE protocol—protection, rest, ice, compression and elevation—and maybe take some sort of anti-inflammatory medication or over-the-counter cream.

Once the pain subsides, Zarski recommends isometric exercises, which is strengthening without movement.

The most effective is having a patient raise their hand up into an extended or upright position and simply hold a light weight in place for 20 seconds.

“I might get them to do that five times. That exercise has been shown to have significant improvements in pain,” said Zarski.

He also suggested some type of eccentric strengthening, which would be various versions of a reverse wrist curl with low resistance.

“Essentially, the tendon that has changed will respond well to forces put on it and the body will naturally start to realign scar tissue and improve the strength of the tendon,” he said.

“With proper stress, the body will naturally heal itself, so it’s fair to say the degenerative changes to the tendon are not permanent.”

Other exercises may include activities that produce a torquing or twisting motion at the wrist and eventually squeezing a ball, but an ergonomic intervention may also play a role in wellness.

For instance, Zarski explained if someone has golfer’s elbow brought on by typing, it could be related to the position of their desk and keyboard.

“Bad posture can lead to not enough space in the front for the tendons to travel under the bone,” he said.

He added seeing a professional is the surest path back to pain-free activity.