Teletubbies: Watching TV has a greater link to obesity than other sitting activities like video games

Watching TV puts children at the greatest risk of obesity in comparison to other downtime activities, a study has found.

Whether the child is playing video games, is eating, or on a computer has more of an impact on their weight than the duration of their sitting time, it claimed.

Researchers said there is an urgency to change the behaviours of inactive or overweight children before it’s too late.

As many as one in five children start school in the UK being overweight or obese, and one in five 6 to 19-year-olds are obese in the US.

In Australia, the figures are starker, where almost a quarter of children aged 5-17 years are considered overweight or obese. 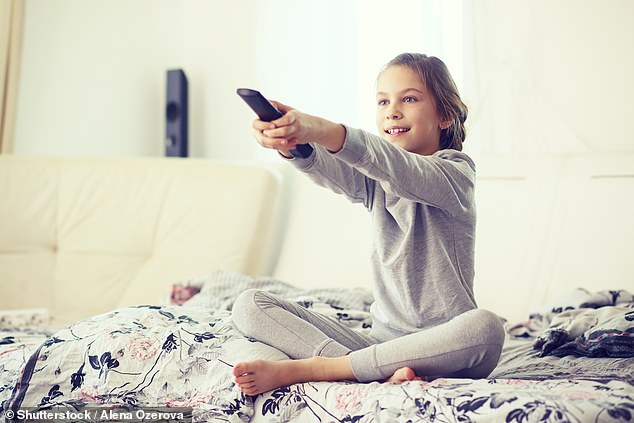 Watching TV puts children at the greatest risk of obesity in comparison to other downtime activities such as video gaming, a study has found

The study at the University of South Australia assessed the sedentary behaviours of 234 Australian children aged 10 to 13 years who either were of a healthy weight (74 boys, 56 girls) or classified as obese (56 boys, 48 girls).

It investigated the impact of different sitting behaviours – watching television, playing video games, playing computer, sitting down to eat, or traveling in a car.

It found that, excluding sleep, children spent more than 50 per cent of their day sitting, with television dominating their time for two to three hours each day.

They found that watching TV is more strongly associated with obesity in both boys and girls than any other type of sitting.

And boys tend to be fatter than girls and also spend more time in front of their screens.

‘It’s no surprise that the more inactive a child is, the greater their risk of being overweight,’ Dr Margarita Tsiros, the lead researcher, said.

‘But not all sedentary behaviours are created equal when it comes to children’s weight. This research suggests that how long children spend sitting may be less important that what they do when they are sitting.

‘For instance, some types of sitting are more strongly associated with body fat in children than others, and time spent watching TV seems to be the worst culprit.’

Although this was the case for both genders, the study also found differences between the sitting behaviours of boys and girls.

Girls as young as four are more likely to be obese if they have a television in their bedroom, research has found.

Portuguese scientists analysed the lifestyles and habits of 120 girls aged between four and six by quizzing their parents.

They found girls with TVs in their bedrooms were three times more likely to be overweight than their peers without the luxury.

And the risk of obesity was four times higher, according to the study.

Almost two thirds of the parents questioned confessed their children had a TV in their bedroom by the age of six.

In boys only, prolonged bouts of sedentary behaviour and time spent playing video games or on the computer were positively linked with obesity.

‘Video gaming and computer use are popular past times, but our data suggest these activities may be linked with higher body fat in boys.

‘Boys who are sitting for longer than 30 minutes may also have higher body fat, so it’s important to monitor their screen and sitting time and ensure they take regular breaks.’

One of the key findings was that girls engaging in more non-screen sedentary behaviours may have lower obesity.

Although there was no direct link between TV time and obesity, the strong association highlighted the importance of setting children up for healthy habits at an early age – obese children are significantly more likely to become obese adults.

Dr Tsiros said: ‘An overweight child is more likely to grow up into an overweight adult, so the importance of tackling unhealthy behaviours in childhood is critical.

‘Children who are obese have an increased risk of developing serious health disorders, including type 2 diabetes, high blood pressure and cholesterol.

‘They may also experience reduced wellbeing, social and self-esteem issues, along with pain and difficulties with movement and activity.

‘By understanding children’s sedentary behaviours – especially those that are placing our kids at risk – we’ll ensure they stay on a better path towards a healthier weight.’

It comes after research last week found that sitting in front of the TV for as little as one hour a day can increase the risk of bowel cancer in young people.

Those who lazed in front of the TV for two hours a day or more had nearly a 70 per cent increased risk, the study, led by Dr Long Nguyen at Massachusetts General Hospital and Harvard Medical School, found.

The recommended guidelines for childhood activity levels in the UK is being met by 23 per cent of boys and 20 per cent of girls, according to the most recent 2015 figures.

HOW FAT ARE BRITISH CHILDREN?

English children are fatter than ever – official data revealed in October that one in every 25 10 to 11-year-olds are severely obese, the fattest possible category.

And out of around 556,000 children of primary school-leaving age in the UK, 170,000 are overweight to some degree, figures showed in May.

More than one in every five 11-year-olds are obese – equivalent to around 111,000 children – and being so fat means they are more likely to develop type 2 diabetes, heart disease, cancer or have a stroke.

The Royal College of Paediatrics and Child Health say children should be weighed every year at school because ‘danger is on the horizon’ and the UK is lagging behind the rest of the EU in tackling obesity.

Experts have also warned children gain weight ‘at a drastic rate’ when they’re at school.

Sugar in food is known to be contributing to the swelling waistlines of children, with huge amounts of popular foods crammed full of sugar.

A sugar tax has reduced the effects of some soft drinks, but breakfast cereals can still contain more than 70 per cent of an entire day’s sugar in a single bowl.

Even a single can of Coca Cola (35g of sugar) or one Mars bar (33g) contain more than the maximum amount of sugar a child should have over a whole day.

‘Unless we tackle this obesity crisis, today’s obese children will become tomorrow’s obese adults whose years of healthy life will be shortened by a whole host of health problems,’ Izzi Seccombe, of the Local Government Association, said in May.