How drinking a protein shake before BED could give you bigger muscles: Drinking the rich drink before hours of inactivity might ‘make the body burn fat more effectively’, study says

Drinking a protein shake just before bed increases your muscle gains, according to research.

Scientists looked at the late-night intake of casein protein formulas following a weightlifting session in the gym.

They found the extra consumption of calories won’t make you fat – even though it’s followed by hours of inactivity.

In fact, the opposite appears to be true. The study showed drinking the shakes before sleeping actually appears to make the body burn fat more effectively. 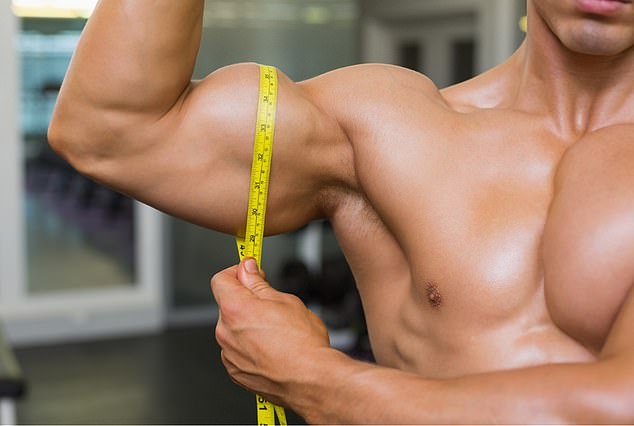 Fact: Muscles can only grow and repair themselves when the right building blocks – amino acids from protein – are available in the blood

‘These have fuelled the idea that over a longer period, a pre-sleep protein supplement can maximize the strength and muscle mass gains during regular resistance exercise training.’

Dr Snijders has made the claim in a new review of several studies, claiming one he did in 2015 study is the most compelling demonstration for the theory.

Half were given a nightly pre-sleep protein shake with about 30g of casein and 15g of carbohydrates, while the other half got an energy-free drink.

Both groups ended the trial able to squat heavier weights and with bigger quadricep muscles (thighs), but the protein group gained significantly more strength and size.

‘In the eight-week morning versus evening casein study, the additional consumption of protein calories did not result in any increase in fat mass despite the fact that exercise volume did not change,’ said Dr Snijders.

‘Supporting this, another group found in 11 young active men that a pre-sleep casein shake actually increased the rate of fat burning the following day.

‘This might be because casein ingestion reduces the insulin response to subsequent meals, which pushes your body to use more fat.’

Muscles can only grow and repair themselves when the right building blocks – amino acids from protein – are available in the blood.

But, unlike blood glucose, the body does not store and release amino acids to maintain circulating levels, so they must be obtained from the diet.

Dr Snijders’s review claims to be the first to investigate whether a protein shake before bed has a different effect to consuming the same amount throughout the day.

And, despite the common belief eating before bed might keep you up, he found drinking a shake before slumber does not lead to a restless night.

‘It has been consistently shown that pre-sleep protein ingestion has no effect on sleep onset latency or sleep quality,’ he added.

The data was published in the journal Frontiers in Nutrition.

MEN OBSESSED WITH THE GYM ARE ‘MORE LIKELY TO GET DEPRESSION’

Men who are obsessed with going to the gym to obtain the perfect physique are more likely to suffer from depression, a study by the Norwegian University of Science and Technology and Harvard University found.

Researchers found nearly 10 percent of men surveyed had a body image disorder, believing they were too fat and wanted to be fitter.

Because of this disorder, they were almost more likely to weekend binge drink, go on a diet and use anabolic steroids.

The team says its study is the first to investigate men’s relationship to their muscles and that more resources need to be available to help the growing number of males struggling with body image disorders.

The gym-obsessed men were four times more likely to use legal and illegal supplements, and anabolic steroids to build muscle.

Researchers also found that more than one in three men had been on a diet in the past year unrelated to obesity.

‘Boys aren’t looking to be thin,’ Dr Eik-Nes said. ‘They want to have big muscles. So the questions given to girls are totally wrong if we want find out how young men see themselves and their own bodies.’

‘The problem arises when the bodies of professional athletes like Ronaldo become the ideal for regular young men who have jobs, studies and family,’ said Dr Eik-Nes.

‘Training has to be your full-time job if you want to look like Ronaldo. He belongs to one-in-a-thousand of the world’s population who make their living from sports.’