An advertisement for a vape liquid firm has been banned after it gave a false impression the products were endorsed by Olympic hero Sir Mo Farah.

A bus stop poster for the company Diamond Mist featured an image of the eyes, eyebrows and bald head of someone who looked very much like the gold medal winner alongside a caption that read: ‘Mo’s Mad for Menthol’.

At the time the poster appeared in April and May this year, people complained that it was misleading to the Advertising Standards Authority (ASA).

Sir Mo himself took to social media to make clear the advertisement had nothing to do with him. 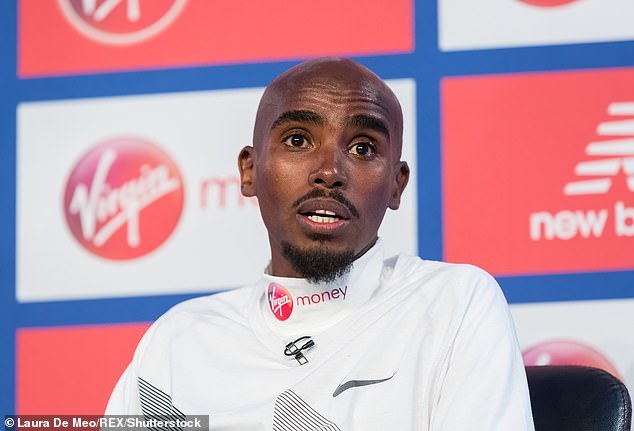 In a ruling published today, the watchdog said: ‘We noted that Sir Mo Farah had tweeted about the ad, saying that he did not feature in it and had not endorsed the product.

‘Overall, we considered that the ad was likely to give consumers the misleading impression that the product had been endorsed by Sir Mo Farah. We therefore concluded that the ad breached the Code.’

As well as banning the ad, it told the company that it must not imply that Sir Mo, or any other person, had endorsed their products if that was not the case. 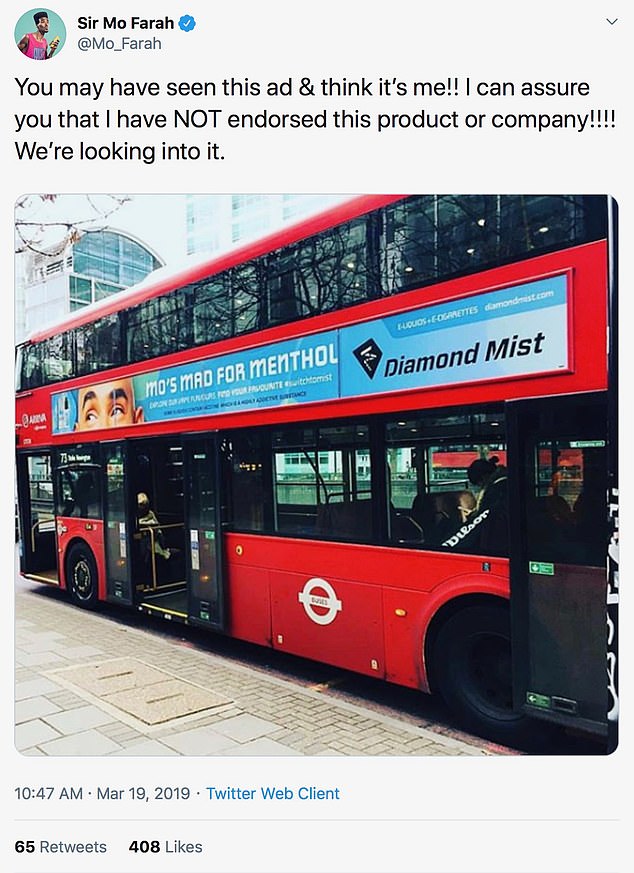 The advert featured an image of the eyes, eyebrows and bald head of someone who looked very much like the gold medal winner alongside a caption that read: ‘Mo’s Mad for Menthol’

In its defence, the company said its marketing campaign was designed to appeal to a wide number of people, inclusive of all genders and ethnicities, and claimed the model used had a different skin tone to the real celebrity athlete.

The vape company posters appeared on London buses. When the posters first appeared, Sir Mo Tweeted: ‘You may have seen this ad & think it’s me!! I can assure you that I have NOT endorsed this product or company!!!!’

His spokesman said: ‘We are pleased the ASA has ruled Diamond Mist’s advert to be misleading and could have led to members of the public believing Sir Mo Farah had endorsed the vaping company.’

What is an e-cigarette and how is it different to smoking tobacco?

An electronic cigarette (e-cigarette) is a device that allows users to inhale nicotine by heating a vapour from a solution that contain nicotine, propylene and flavourings.

But while they have been branded as carrying a lower risk than cigarettes, an increasing swell of studies is showing health dangers.

E-cigarettes do not produce tar or carbon monoxide, but the vapor does contain some harmful chemicals.

Nicotine is the highly addictive chemical which makes it difficult for smokers to quit.

Very similar to normal e-cigarettes but with sleeker design and a higher concentration of nicotine.

Thanks to its ‘nicotine salts’, manufacturers claim one pod delivers the amount of nicotine as a pack of cigarettes.

It is composed of an e-cigarette (battery and temperature control), and a pod of e-liquid which is inserted at the end.

It is known as a ‘heat not burn’ smokeless device, heating tobacco but not burning it (at 350C compared to 600C as normal cigarettes do).

The company claims this method lowers users’ exposure to carcinogen from burning tobacco.