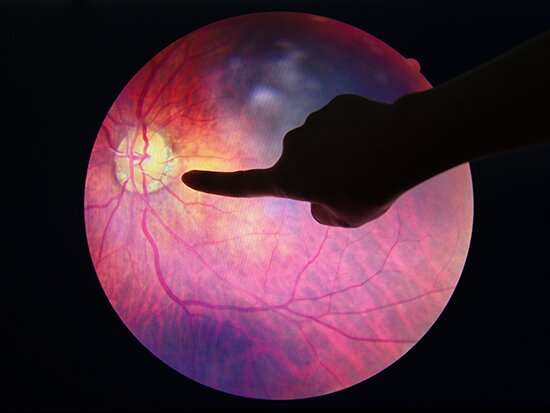 The leading cause of blindness in American adults is diabetic retinopathy, progressive damage to blood vessels in the light-sensitive tissue at the back of the eye. Yet the source of this damage appears to lie in the belly—mainly a leaky small intestine that weakens the barrier between gut bacteria and the blood system, according to a study published in the journal Circulation Research.

The research blood from human subjects with Type 1 diabetes and a mouse model of Type 1 diabetes were used to explore mechanisms underlying diabetic retinopathy. The results show a way to possibly prevent, or even reverse, the eye damage.

“To our knowledge, this study represents the first time that gut barrier disruption has been implicated in the pathogenesis of diabetic retinopathy and also directly links gut leakage with retinopathy severity in human subjects with Type 1 diabetes,” said Maria Grant, M.D., leader of the research team and a professor in the University of Alabama at Birmingham Department of Ophthalmology and Visual Sciences.

Some background is useful to understand Grant’s research.

First, it is known that Type 1 diabetes dysregulates the systemic renin-angiotensin system, or RAS. RAS is a system of hormones and enzymes that regulates blood pressure and other metabolic changes. Besides systemic RAS, there are also local RAS networks that act in diverse tissues. One key RAS enzyme is ACE2, or angiotensin-converting enzyme 2. The loss of ACE2 in diabetes activates the vasodeleterious RAS axis and lessens the vasoprotective RAS axis. Intriguingly, in a mouse model of Type 1 diabetes, feeding mice with a modified gut bacterial strain of Lactobacillus paracasei, which was engineered to produce human ACE2, protects the mice against diabetic retinopathy progression. Finally, lack of ACE2 in the gut was known to increase gut permeability and systemic inflammation.

The human studies, published in Circulation Research, compared people with Type 1 diabetes versus controls. The subjects with Type 1 diabetes were further stratified into three groups: no diabetic retinopathy, non-proliferative diabetic retinopathy and the more serious disease called proliferative diabetic retinopathy. By measuring levels of certain immune cells and biomarkers in the blood, including gut microbial antigens, the researchers found that human subjects with retinopathy had a dysregulated systemic RAS and profound gut permeability defects that activated components of both the adaptive and innate immune response. Furthermore, increases in the severity of diabetic retinopathy were found to correlate with increased levels of gut permeability biomarkers and a gut microbial antigen. This included increased levels of angiotensin II, the RAS hormone that activates the vasodeleterious RAS axis.

Using the Akita mouse-Type 1 diabetes model, researchers first gave the ACE2-producing Lactobacillus paracasei, developed by Qiuhong Li, Ph.D., from the University of Florida, to the mice orally beginning at the onset of diabetes. This probiotic treatment prevented the loss of gut epithelial ACE2 typically seen in Akita mice, and importantly, it prevented intestinal epithelial and endothelial barrier damage. It also reduced the high blood sugar levels known as hyperglycemia.

When the oral ACE2-producing Lactobacillus paracasei treatment was withheld until six months after diabetes was established, that delayed treatment reversed the gut barrier dysfunction and diabetic retinopathy that had already formed in the mice, including reducing the number of damaged capillaries in the retina.

“The significance of the work is we demonstrated that dysregulated intestinal RAS results in translocation of gut microbial antigens into the plasma,” Grant said. “These bacterial peptides activate the endothelium via toll-like receptors, creating an inflammatory endothelium that has been strongly implicated in the pathogenesis of vascular diseases, including diabetic retinopathy.

“We demonstrated loss of intestinal barrier function in human subjects with Type 1 diabetes using gut barrier biomarkers, and this increase in permeability was associated with gut-derived immune cell activation.”