Health experts said a ‘perfect storm’ of underfunding, failed contracts and a staffing crisis are behind the problem.

Official data showed an estimated 1.45million people have tried and failed to get an NHS appointment in two years.

It revealed around 730,000 patients are put off going to the dentist by the cost and 130,000 are currently stuck on waiting lists.

Despite dental care being available on the NHS, most adults still have to pay for it. 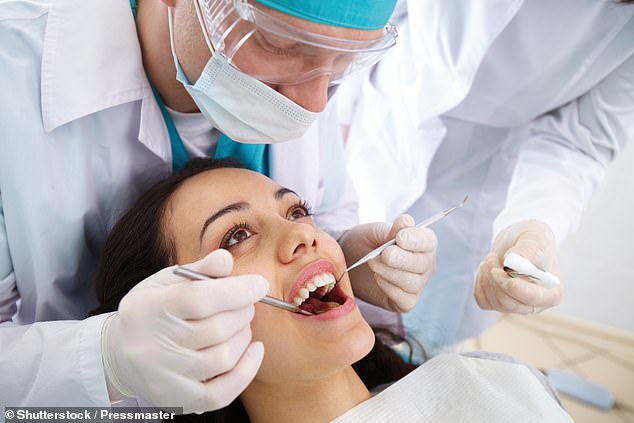 More than 2million adults in England are unable to see an NHS dentist. Health experts said a ‘perfect storm’ of underfunding, failed contracts and a staffing crisis had caused the problem to spiral (file)

Children, pregnant women and those on low income are the only people who get treatment for free.

Check-ups, scale-and-polishes and X-rays cost £22.70, while complex procedures such as having dentures or crowns fitted can rise to £270.

A further two million people delay getting treatment because they assume they won’t be able to get an appointment.

This suggests nearly one in 10 adults is missing out on dental care, according to an analysis of the data by the BBC.

Leading dental experts said the findings highlighted that access to an NHS dentist was a problem in every corner of the country.

NHS figures revealed today there were 25,702 hospital admissions for tooth decay among five to nine-year-olds in England in 2018-19.

In comparison, only 11,811 admissions were needed to treat tonsillitis – the second most common problem on the list.

Surgeons warned the hospitalisations are ‘unacceptable’ and children are eating too much sugar and not taking care of their teeth well enough.

Although the number of children being admitted for dental decay was lower than the previous year (26,111), it still far outstripped tonsillitis.

Children admitted to hospital because of their teeth are probably there because they need to have teeth pulled out while under general anaesthetic.

This brings risks of its own and has the potential to cause breathing or heart problems.

‘These access problems are no longer affecting a few “hotspots”, but are now the reality for millions across every English region.

‘The public are entitled to access care, but the system is stacked against them.

‘Those losing out are the patients who need us most. The next government owes it to them to ensure this service has a future.’

The BDA said recruitment problems had become an epidemic, with surveys indicating 75 per cent of all practices struggle to fill vacancies.

And 59 per cent of dentists say they plan to reduce or end NHS work, according to the body.

Using the GP Patient Survey, analysis shows the number of people not getting dental care has remained consistent since 2014.

The worst areas, where one in six adults don’t access a dentist, include Bradford, Brighton, Cornwall and parts of Kent, Surrey, Norfolk and London.

Such data is not available in the rest of the UK, but the BDA said there were similarly serious problems in Wales.

It recognised that issues in Northern Ireland and Scotland existed, but noted it was on a smaller scale.

NHS England told the BBC it was ‘actively working’ with local areas to better understand what was causing problems.

Patients should use the NHS website to find which local dentists are accepting NHS patients, a spokeswoman said.

Both main political parties have pledged to pump money into the NHS after the December 12 election.