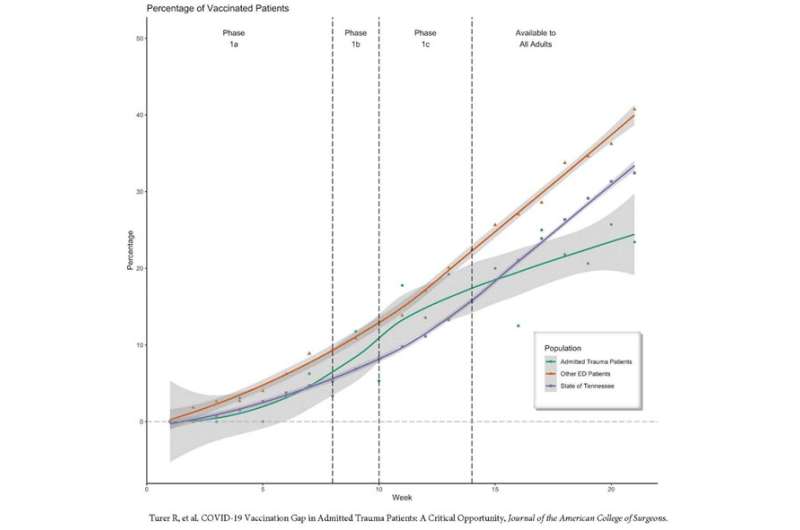 Trauma patients treated and hospitalized in a Tennessee medical center had a 33% lower rate of COVID-19 vaccination than non-trauma patients who were hospitalized following treatment in the emergency department (ED). This vaccination gap widened as vaccines became more widely available, according to a study published online as an “article in press” in the Journal of the American College of Surgeons (JACS).

“These data show that there’s an opportunity to vaccinate a high-risk population that’s currently not vaccinated and admitted to the hospital. Admission through the trauma center provides an opportunity to introduce the vaccination conversation to get the vaccine rates in this group to the same level of rates of the general public,” said senior study author Bradley M. Dennis, MD, FACS, a trauma surgeon at Vanderbilt University Medical Center (VUMC) in Nashville, Tennessee, where the study was conducted.

The study included 1,290 emergency department (ED) patients admitted to the trauma service and 23,901 other patients who came to the ED at VUMC between January 1 and June 1, 2021. This observational study used data captured by the center’s electronic health records (EHR) system. VUMC has a Level I trauma center that’s equipped and staffed to provide the highest level of trauma care.

The researchers found that 11.7% of trauma patients were vaccinated before arrival compared with 17.4% of the other ED patients (P<0.001). The proportional difference between the two patient groups widened from 1.847 after the first week of the study to 18.585 during week 21, the last week of the study—suggesting a widening vaccination gap. Vaccines became available to all adults in week 14 of the study.

By the last week of the study, approximately 22% of trauma patients were vaccinated before arrival compared with approximately 41% of other ED patients.

The study defined fully vaccinated patients as those who were two weeks or more past getting either the second dose of the two-dose Pfizer or Moderna vaccines, or the single-dose Johnson & Johnson Janssen vaccine.

“The study was motivated by the clinical observation that the patients in our trauma service were less likely to be vaccinated than what we were seeing elsewhere in the ED and elsewhere in the hospital,” said lead study author Robert Turer, MD. The study design allowed the researchers to evaluate for a vaccination gap while accounting for important demographic factors including race, ethnicity, age, home county, and emergency severity index. Their results suggest that a vaccination gap exists even when accounting for these important factors. The study was not designed to evaluate these covariates individually. Dr. Turer is with the Department of Emergency Medicine and Clinical Informatics Center at the University of Texas Southwestern Medical Center in Dallas. At the time of the study, he was a clinical fellow at VUMC.

“Ultimately, we discovered a widening vaccination gap between patients admitted to the trauma service compared with the rest of our ED population, even after accounting for time and demographic covariates, which suggested that the trauma center population was at risk and may ultimately be good candidates for vaccine outreach,” Dr. Turer said. Dr. Dennis noted that this study reinforces what other studies of trauma populations have found. “Trauma patients tend to be people who engage in higher-risk behaviors of all sorts compared with the general population, so that characteristic would probably extend to some of the preventative health maintenance activities,” he said.

However, the researchers also noted other barriers to vaccine access that trauma populations may encounter. Despite being in a major city, the trauma service at VUMC covers a large geographic area that includes several rural counties. The geographic analysis showed the trauma center treated more patients from the surrounding rural counties. “There are obviously some socioeconomic barriers that tend to correlate with a higher proportion of trauma patients as well,” Dr. Dennis said. “It’s multifactorial.”

Geographic factors like those of greater Nashville highlight the uniqueness of every trauma center, Dr. Turer explained. “For any sort of public health intervention, each site would have to be really nuanced about this analysis before they try to do an intervention and make sure that they’re applying this approach to the right population,” he said. “For instance, you may have totally different characteristics in how you approach this in a densely urban environment compared with middle Tennessee, which has a dense urban center surrounded by a very spread-out rural population.”

But the high level of regulations on trauma centers make an intervention to vaccinate trauma patients more feasible than in other hospital departments, Dr. Turer said. “It is standard practice to provide tetanus boosters to trauma patients. One could imagine integrating other public health measures such as COVID-19 vaccines into trauma admission protocols,” he said. “It takes getting the right information to the right leadership and having that trickle down to the rest of the care that we provide.”

This study is important because it emphasizes the role hospitals can play in improving vaccination rates, said Eileen Bulger, MD, FACS, acting division chief of trauma, burns, and critical care at the University of Washington in Seattle and chief of trauma and acting surgeon-in-chief at Harborview Medical Center. “It’s a good study in that it highlights the importance of hospitals looking at this issue and thinking about what our strategies might be to help support the public health messaging,” said Dr. Bulger, who is also Chair of the American College of Surgeons Committee on Trauma but was not involved with the study.

However, she noted that in the trauma setting, these types of interventions require some nuance. “Obviously, I think you need to be sensitive to the situation,” she said, “and certainly it’s a time of crisis in the immediate period when the patient is unstable and requiring emergency procedures and surgery; that’s not the time to do public health messaging.”

The opportunity to have a conversation would present itself once the patient is stabilized, interactive, and involved in their rehabilitation planning, she said. “That’s when you can talk to patients about things that impacted their risk of injury,” Dr. Bulger said. “There are well-defined programs for violence intervention, for screening for risk factors such as alcohol use and intervening there after injury, to try to reduce somebody’s risk of being injured again. So, you could develop such a program around vaccination and just having a strategy to have a conversation in a nonthreatening way with patients about their vaccination status.”