Thousands of people with mental health problems are being left waiting for months on end for NHS therapy.

Almost 300,000 patients who qualified for talking therapy last year spent at least a month on the ‘hidden’ waiting list, an investigation revealed.

The patients had all had their first appointment, so could be counted as having started treatment, but that was usually an assessment and the real therapy started in the second.

Waits for the second appointment could stretch to be months long – one man even admitted to having tried to kill himself during the gap between his sessions.

The NHS said rising numbers of patients and ‘pressure on the system’ are to blame for the growing waits. The NHS is known to be short of staff and overspending. 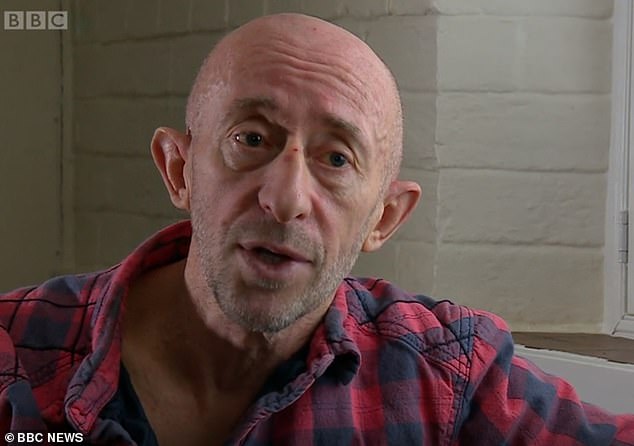 Paul Williams, who developed PTSD after a career in the police force, said he tried to kill himself while he was waiting to get therapy on the NHS

‘The treatment was really good when I got it,’ Paul Williams, 60, told the BBC. ‘But the problem is you are kept in a holding pattern.’

Mr Williams, from Devon, sought help with his mental health after developing post-traumatic stress disorder after working as a policeman.

‘Waiting is really hard when you are struggling mentally,’ he said.

‘I’m not saying the delays were the reason I tried to kill myself – I had lost my career and there was a lot going on – but they certainly didn’t help.’

Of the 582,556 which resulted in two or more appointments, one in six waited for 90 days or more.

There is a gap in the numbers because each referral is not an individual patient, not all referrals progress to therapies and not all patients go to a second appointment.

These are recorded through a scheme called the Improving Access to Psychological Therapies (IAPT) which, on average, provides people with seven sessions each.

The IAPT programme gives around 90 per cent of its patients their first appointment within six weeks, which is well within its target of 75 per cent.

But, over the past year, around half of all patients have waited for a month or more for the second session, which is when the real therapy starts.

On average, people wait more than two months from referral to their second appointment, figures show, and around 100,000 people are thought to abandon treatment during that time.

Speaking on BBC Radio 4’s Today programme this morning, the NHS’s Professor David Clark said: ‘We would like to make it shorter but the thing is that it is important to know where we have come from.

‘The IAPT programme started 10 years ago and, then, less that five per cent of people with anxiety and depression got a chance to have therapy and they waited on average 18 months.

‘We have not got to a point where the average waiting time for your first appointment is just 20 days, so just three weeks which is an extraordinary transformation.

‘Recently, the waiting time to the second treatment actually hasn’t changed it is on average about nine weeks but what has happened is that we have brought forward the initial assessment a bit earlier so the gap appears to be increasing.’

Psychological therapies include counselling for depression and cognitive behavioural therapy (CBT), which helps people to understand how their thoughts can cause mental health problems and work to overcome them.

People can refer themselves for psychological therapies or they can be referred by the GP, and the therapies are not reserved only for patients with a mental health diagnosis.

Panic attacks, anxiety, obsessive thoughts or behaviours, or fears of social situations could all be worthy of the therapies.

According the charity Mind, around a quarter of people in the UK experience a mental health problem every year and one in six say they have anxiety or depression.

Mind’s chief executive, Paul Farmer, told the BBC: ‘IAPT has been the biggest driver of more people getting access to services over the last ten years.

‘But there are problems. Being left without support can have life-threatening consequences.

‘Whoever forms our next government needs to make sure that everyone with a mental health problem gets the right help and support at the right time.’

An NHS spokesperson said: ‘The fact is more than one million people were referred to IAPT services over the last year, helping hundreds of thousands overcome their depression and anxiety and the widely agreed waiting time targets have not just been consistently met but exceeded.

‘Nine out of ten patients get help quickly and more than half of those go on to recover, while the NHS Long Term Plan will go even further – seeing 1.9 million people by 2023/24.’

WHAT IS COGNITIVE BEHAVIOURAL THERAPY?

Cognitive behavioral therapy (CBT) is one of the most popular forms of talk-psychotherapy.

Most CBT treatments take course of a relatively short period of time: Weekly one-hour sessions, over the course of five to 10 months.

The theory behind the approach is that teaching patients to alter the behaviors, thoughts and beliefs underlying their feelings, rather than than their emotional responses to them.

CBT is meant to teach patients practical, applicable skills for re-framing and coping with negative emotions so that they can apply them for a lifetime without continuing to see a therapist long-term.