Sagar Varma never wanted to find himself in a hospital again. The 27-year-old IT worker from Warren, Michigan, tore his ACL in 2009, but didn’t get it looked at until eight years later. He required two surgeries and months of recovery, during which he couldn’t do much more than sit and eat. Varma had been heavy as a kid, and at 25, he was at 6’3 and weighed 300 pounds.

But preparing for his surgeries, he’d begun working out and dropped to 265 pounds. After surgery, though, he was stuck eating delivery fast food again. In his heavier days, it had been a familiar pattern. “I used to feel bad that I was heavy, so to feel happy, I used to eat fast food,” he says. Taco Bell and McDonald’s a few times a week made him feel happy, until the next morning when he woke up and felt bad—which led him back to more fast food.

Having surgery had given him a reprieve from that cycle, but then, as he recovered, the weight started to creep back up. He didn’t want to waste his chance. “I made a promise to myself that I would never go back to a hospital again,” he say. “I wanted to change my lifestyle.”

He started walking 30 minutes a day while his leg healed. After about six months, he felt recovered enough to start jogging, hitting 1.5 miles a day. Even through the cold Michigan winter—”even in the snow;I do not recommend it”—he hit his marks. Then he added weightlifting, working to build his strength. He still had a soft spot for junk food, so he tried swearing off meat; going vegan for a few months dropped his cholesterol and triglyceride levels so much that even his doctor was impressed.

He dropped down to 225 all by himself, using a free app called JeFit, talking to his trainer friend, and learning proper form from YouTube videos. He hired a trainer for more help, and with guidance on diet and workout routines, he’s now down to 213 pounds—in a year, he’d dropped 85 pounds and added muscle. 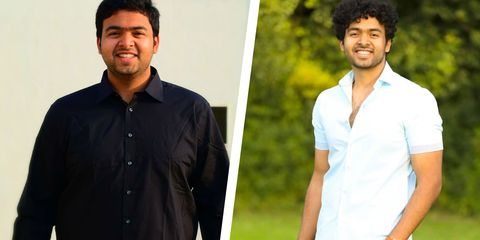 “I used to wear XXXL and I now wear M (slim fit),” he says, something he thought he would never achieve. He’s more confident; working out has become a part of his routine. He’s aiming to lose the last of his love handles, then build more muscle for an aesthetic look. “I’m a huge fan of Hugh Jackman and Ryan Reynolds,” he says.

Varma stays motivated thinking about how he felt eating junk food and recovering in the hospital. He doesn’t want to go back to that. He started following weight loss stories on Instagram, and eventually posted his own photos. The supportive response from his friends and family buoyed him and kept him going.

“A ton of people have already said this and I am no different,” he says: the keys to success were workout, diet, and consistency. For him, it also helped to have someone hold him accountable. He told friends what he was doing, using their imagined judgment of him if he failed as a motivator. “That is a weird way of pushing oneself,” he says, “but it helped me.”