It’s the rubbish triathalon and it’s sweeping across Melbourne, leaving nothing in its wake, except pristine streets, parks, waterways and beaches. The participants are out there on foot, in kayaks and in weighted wetsuits, picking up what others have dropped, thrown, or perhaps hidden.

It begins when people have had enough. It’s when they’re sick of seeing rubbish everywhere. Have you taken a good look at your area lately? Maybe you’re lucky: maybe someone else beat you to it. Maybe those who got in before you were pushing a pram along the street and couldn’t avoid seeing it. Or glanced down from a highway overpass and saw it clogging the creek below, or were trying to capture the perfect image of a baby seahorse when they decided: there’s just too much rubbish here. And they do something about it.

Photographer and graphic designer Josie Jones is the Mornington Peninsula’s 2019 Citizen of the Year, and 2016 Dame Phyllis Frost Award winner. She lives in Rye and spends the first hours of her mornings walking along her local beach, getting “abs upon abs” from bending over and picking up every little bit of rubbish she sees. She’s often in the water, too, in a wetsuit, and what she sees in the “seahorse capital of Melbourne” isn’t always pretty. 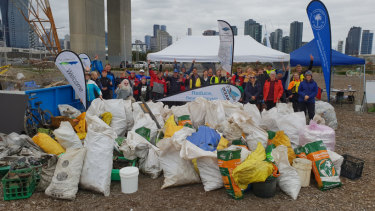 “I was diving the other day and I was blown away,” Jones says. “Stingray, 12 seahorses, I was like, 'this is so good!' Massive salmon, mullet … and this is on Melbourne’s doorstep!” she reports. “But I was swimming on my son’s birthday recently, trying to photograph and film a baby seahorse. It was tiny and I turned around and there, floating behind this little seahorse was a cigarette butt, thrown off by someone fishing,” Jones says. “Smokers don’t see their butts as litter,” she says. “But they’re plastic.” In one week in April, her litter count featured 2000 of them.

Love our Street 3162 (Caulfield South) convener Sophie Vid started organising monthly street cleans after realising her neighbourhood had a rubbish problem. “I was on maternity leave and spending a lot of time on foot and walking around with my young son in the pram. Having that perspective of being on foot, it was unavoidable: all the rubbish everywhere. Footpaths … gutters … in parks … shopping strips. It got to a point where I was really compelled to do something,” she says.

She started picking it up. “I did it with my eldest son as a fun activity to kill some time, in between feeding and sleeping. Then I came across this group that had set up in Elwood, which was a street-cleaning group,” she says. In December 2017, Vid started her own. The first event attracted 18 people, now the monthly cleans draw around 40.

“We’re in a catchment, the Elster Creek catchment. Catchments are particularly troublesome because all of that litter is sucked into waterways and ends up on the beach,” she says. The most commonly picked up item? “Thousands of cigarette butts,” Vid says. “We fill up a decent shopping bag full of them. I don’t think there’s an understanding that they are plastic and highly toxic and all the toxins are being released into the water,” she says.

Jones and Vid are working in different areas, but both have taken specific action. And when they did, they found others followed. “Waste is a common problem, but it actually creates a community,” Jones says. “When I first moved to the peninsula seven years ago, people would see me with a bag of rubbish and they’d run. They’d be like, 'I don’t want to stop and talk!' Some people would see me and go, 'oh you’re good, I wouldn’t do that!', or 'oh wow! Are you getting paid to do that?' Jones has seen that change. “Now, so many people pick up litter.”

People have started doing it for fun and fitness. Ultra-trail runner Karin Traeger (aka @theplasticrunner) has organised more than 20 plogging (when you jog and pick up rubbish at the same time) events over the past year. She also started out alone, picking up rubbish while out running. “Last year I was training for a big 100-kilometre race and I was spending quite a lot of time running around the Yarra, and it caught my attention that this place is actually a disaster!” she says.

“I started picking up rubbish but realised that this is a really big issue and I can’t do it all myself.” She decided to bring people together and organised her first plogging event. Since the first one, in April 2018, between 15-30 people have been attending the monthly events at Kew’s Studley Park, as well as at trail-running events including the Surf Coast Marathon and Warburton Trail Fest. 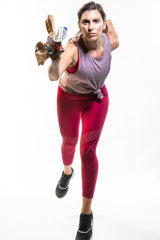 “It is good training,” Traeger says. “Especially for someone who’s getting back into fitness. Someone who doesn’t want high intensity. You’re bending over, you’re changing directions; you’re using your whole body instead of keeping in one single movement for half an hour. It’s more dynamic. As a workout it’s not boring, you’re doing different things,” she explains.

And when things get tough, it can be a way of reaching the finish line. “My longest plogging was 62 kilometres in February this year,” Traeger says, laughing. “After a race went not so well, and my ITB was a bit angry 15 kilometres into the race, I decided to plog my way to the finish line.” This small action of picking up rubbish thrown by runners on the course was change making.

“I showed the big issues around the lack of mentioning to not litter in the race briefing and race manual to the organisers, and they’re working on making the trail-running community more aware that trail doesn’t work the same as road when throwing away cups and lolly wrappers,” Traeger says.

Trail-running organisers now ask Traeger to incorporate plogging into their events. And running and adventure businesses such as Salomon and Paddy Pallin are getting involved to help the events plod along, too.

Paddy Pallin’s Community Outreach manager Emma Jessop wants to see plogging become mainstream at events. “Plogging is a new interest to myself and Paddy Pallin,” says Jessop, who attended The Plastic Runner’s most recent event. “My favourite part of plogging was the inspiration we were giving to total strangers who saw what we were doing in Studley Park,” she says.

Mornington-based international walking adventure company RAW Travel has recently ramped up its efforts to clean up its local environment, encouraging its 25 local staff members to head out together to collect rubbish.

“Beach cleans are one of the ways to give back to the planet,” RAW Travel’s sustainability lead Birte Moliere says. “We work under the Beach Patrol umbrella, so it’s really easy,” she says. “And we only go to beaches where there’s a real need.” Moliere admits it can be a bit full-on. “The first one we did was for three hours. Dave [Reynolds, RAW’s founder and owner] was saying, 'let’s keep walking', but unless we’re out with the boat, which takes us to difficult-to-reach places, we’ve discovered you can make a big difference in an hour.”

An hour is enough for most suburban street cleans, too, a lot can get picked up in that time. “The last haul was 88kg, in an hour,” Vid says. “We had 41 volunteers come, and when you have that many people together you can cover a lot.”

Ian Thomson of Ocean Crusaders has seen a huge rise in the number of people attending his Paddle Against Plastic events. The last event in Docklands was a “huge success”, with 107 people coming down and collecting 938kg of rubbish, mostly by kayak and canoe. “Considering most of it was polystyrene and plastic bottles, that’s a fair volume of rubbish,” he says.

“People love the events. It’s a strange thing, people come back covered in mud and all that, and they’re astounded at how much rubbish was in there, but satisfied that they’d been able to play their part and contribute to cleaning up that area. Unfortunately when I went back there seven weeks later it was like we weren’t even there,” he says. “It’s all blowing off the street, getting washed down the waterways and into the ocean.”

Vid has found the same thing. “I think once you start to see litter you always see it. Unfortunately for me, I haven’t noticed less, I’ve probably noticed more,” she says.

For Thomson, the events are about engaging people in their own waterways. “So that you actually see it and then you want to protect it from the beginning,” he says. “You want to not buy the stuff in the first place. If you do buy it, it has the potential to blow out of rubbish bins and landfill. Even if you do 'do the right thing', your plastic can end up out there. We need to get rid of single-use plastics and ban polystyrene.”

Thomson was a skipper in the Whitsundays in Queensland. What he does now comes from seeing eight dead turtles, three of which had died from plastic. He sailed around Australia solo to raise the issue of plastic bags, breaking a world record in the process, before forming what is essentially a waterway cleaning team. “That’s what we specialise in,” Thomson says. “We go places people don’t want to go.”

Vid, Jones and Traeger have all noticed how picking up rubbish has helped created community – Vid’s group meet for coffee after the clean. It’s also created opportunities for businesses to “give back” and inspired others to get over the embarrassment of being seen to be picking up rubbish. Jones says we need to change the way we think of picking up rubbish. “It’s seen as a punishment [remember yard duty?], but it’s actually one of the most rewarding things you could ever do," she says. "It’s not about you, it’s about the fact that it doesn’t belong in our environment.”

They’re all aware of the health benefits. “I have a pedometer on my phone which isn’t very accurate, but I hit 7000 steps on our cleans. It’s low-impact stuff with low barriers to entry,” Vid says.

Moliere says there are health benefits of getting outdoors and into nature, and the calming effect of nature. Thomson agrees. “You’re out there with like-minded people, getting exercise. You’re paddling in waters, you see the wildlife because you’re there, you’re quiet, so you actually see the wildlife you’re protecting. You’re in nature, enjoying it, and that’s what’s so cool about these events. You’re in the water, albeit in June in Melbourne.”