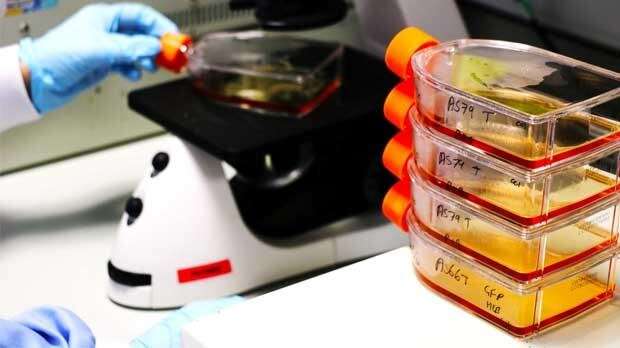 It’s an ordinarily overcast day, but the artificial lights of the lab radiate a crude brightness for Professor Stephen Taylor and his team.

The room is bustling and busy. Scientific equipment and bottles filled with striking liquids are spread across the work benches, and there’s a machine in the corner that seems to be sucking up a solution from one location and decanting it elsewhere.

There’s a faint hum of machinery and a distinct smell of antiseptic hangs in the air.

Here, in this compact, energetic lab in a southerly suburb of Manchester, a group of researchers are nurturing a collection of living ovarian tumors.

“A biobank is just a bank of tissue, that’s all it is,” says Dr. Rob Morgan, a medical oncologist working on the project. The term was first used in the 90s and essentially refers to an archive of human material used for medical research.

The samples can originate from various places in our body, from skin cells and organ tissue, to blood and urine samples. Collections like this are vital for understanding the biology and genetics of a particular group of cells.

But the problem with most tissue biobanks is that, in order to create them, scientists take samples and either preserve them by dropping the sample in a solution of formaldehyde or freeze them at minus 80 degrees.

Both methods fix and kill the samples, “so there is a bit of somebody’s tumor, that is technically dead, just sitting in a freezer,” Morgan explains.

But their biobank is different. It may not be breathing as we know it. But it is alive, and it is growing.

So how do the cells go from growing inside someone’s body, to growing in their lab?

It’s a long process, or ‘pipeline’ as Morgan calls it, that begins with gathering samples from patients at the Christie hospital, just over the road.

Women with ovarian cancer often develop a build-up of fluid in the abdomen, known as ascites. It’s a particularly uncomfortable symptom of advanced cancer, which doctors drain to help relieve the swelling.

It turns out this fluid is choc-a-bloc with cancer cells, so the majority of the team’s samples come from these procedures.

The pipeline begins with a team of three or four, who work for the Manchester Cancer Research Centre (MCRC) Biobank, a larger biobank that collects samples from people with cancer across the Greater Manchester area.

The MCRC biobank technicians are responsible for collecting the samples. So, when a woman comes into the clinic and presents with a swollen stomach, they’ll explain the biobank’s work and give her the opportunity to consent to a sample being used for research. 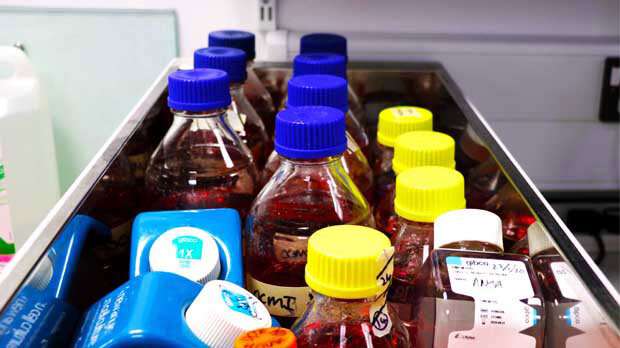 If someone is happy to donate a sample, the MCRC technicians will stay with them during the procedure, then carry the sample over the road and drop it off to the lab.

The lab is normally given around 1 liter of whatever is drained, but anything up to an astonishing 10 liters of fluid can be drained from a single ascites.

Being so close to the hospital is a real bonus for the team—cancer cells can be in someone’s stomach in the morning, and in the lab by teatime.

The team works with solid tumor samples too, which will be collected directly from surgery. “That takes a little bit more coordination,” Morgan explains. This is a truly collaborative project. The most recent paper, published in the journal Nature Communications, is co-authored by two gynecological surgeons, a pathologist and a cancer doctor, to name just a few.

When samples arrive in the lab, they’re passed onto Dr. Louisa Nelson, the architect of the living biobank.

Nelson joined the team five years ago, when they were still figuring out how to get the cells to grow. And now it seems like they won’t stop. “So far they’ve all carried on growing for months and months and months. We haven’t actually got to the point where they have stopped.”

The flourishing biobank is thanks to a research team in Florida who first created the magical media that could get ovarian cancer cells to divide.

It’s Nelson’s job to look after the cells, which Morgan says she does diligently. “What Louisa does is she keeps the tumor going, and that’s why it’s more than just a biobank. There’s a lot of care and attention.”

When they first arrive in the lab, Nelson houses the cells in narrow, flat flasks filled with fluorescent orange media, stacked neatly on top of each other and kept at 5% oxygen, just like they would in the abdomen.

Once they start growing, she begins to separate the tumor cells from all the other cells in the sample.

And then the real analysis can begin.

Since the biobank has been established, the team have analyzed the ovarian cancer cells living and dividing in acute detail. And what they have uncovered is a remarkable level of differences between ovarian cancers, with no two cancers genetically looking the same.

Nelson explains that when the ascites samples are dropped off to her, they already look completely different from one another. You might expect them be to straw colored, but they have received fluid that ranges from “pink, to yellow, to purple.” It ultimately depends what cells and molecules are floating in the fluid.

Although scientists already knew that ovarian cancer has a degree of rearrangement in its DNA, Taylor explained how the chaos they witnessed at a chromosomal level is really quite unprecedented. “You have got to have an appreciation of the problem before you can start to tackle it and I think what we would say is that we haven’t really appreciated the scale of the problem until now.”

That’s because most experiments have relied on cancer cells that have been grown in the lab for decades, rather than cells taken from fresher samples.

The most used cell line of all time, the immortal HeLa cell line, was established using cervical cancer cells from the young American woman Henrietta Lacks. The cells were taken on the 8th of February 1951, the same year that Churchill was re-elected as Prime minister. 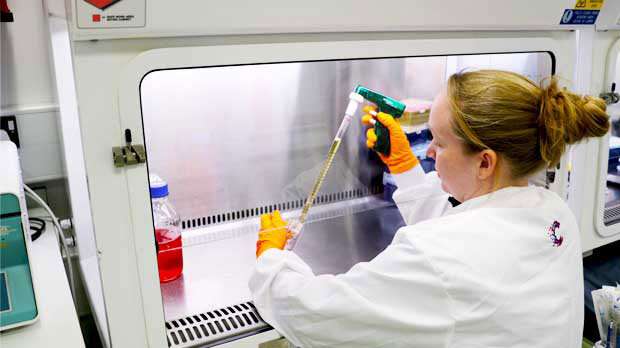 Nelson explains how with these cells, “because they’ve been growing for so long, the stronger, fitter and faster growing cells will dominate that culture,” so they all end up looking the same.

And here lies the key to their findings. “It is kind of like a bespoke, patient specific, tumor cell for that patient,” explains Morgan, “That is the key really, from a clinician’s point of view. What we’re all striving for is a perfect model of the patient that we’re sitting in front of.” And it is this uniqueness to their work that has exposed new findings about ovarian cancer.

Morgan says the team are trying to replicate each tumor’s environment as accurately as possible in the lab. This means that the tumors in the biobank should mirror those from the patient.

And, for some, the team go one step further—collecting tumor cells from fluid samples taken at different times. By accumulating samples throughout the lifespan of the tumor, they can follow changes as someone’s cancer progresses, and when they relapse. In one case, the have collected nine samples from a single patient.

But there are challenges with the biobank too. The issue, Taylor explains, is that because they’re dealing with samples from people with more advanced cancer, they don’t yet understand what’s driving this instability. Is it there in the early stages of the cancer, or does it develop later, perhaps as a response to treatment?

And that is exactly what the team are beginning looking at now.

While the team is continuing to study how the tumor cells respond to a variety of drugs, comparing these results to how patients respond to treatments in the clinic, there are big plans for the future of the biobank.

“What we want to do is build this as a resource, not just for my team but also for the community,” explains Taylor.

The next step will be attempting to combine the tumor cells back with all the other cells as part of their ongoing effort to recapitulate the tumor microenvironment as closely as possible. “The big fantasy is to ask the question: can they serve as patient avatars?”

Taylor hopes that by growing the different cells together in a dish that fully emulate a patient’s tumor, they might be able to predict how the cancer might respond to treatment. This information could then fed back to the doctors, who can make informed decisions based on this new data. “How realistic this is we’ll have to wait and see,” says Taylor.

As amazing and inspiring as the science is, the big motivation behind this project is people living with ovarian cancer.

Ovarian cancer is sixth most common cancer in women in the UK, with a frustratingly small number of targeted therapies and an often challenging prognosis.

“One of the things about ovarian cancer is that it tends to develop silently, for quite a long time. So by the time women come to the clinic, the disease is already well advanced. That then obviously makes it difficult to treat,” Taylor comments.

And of course, without the consent of these patients, this kind of boundary-pushing research wouldn’t at all be possible.