Newly emerging variants of the severe acute respiratory syndrome coronavirus 2 (SARS-CoV-2) have contributed to successive waves of the coronavirus disease 2019 (COVID-19). With several of these variants possessing immune evasion capabilities, they also pose a formidable threat to the success of the COVID-19 vaccines in achieving herd immunity.

A new study published on the medRxiv* preprint server explores the role of new SARS-CoV-2 variants in sustaining the pandemic in South Africa. Further, the researchers of this study found that these variants increased disease severity and viral transmissibility in the country, thus increasing the morbidity and mortality of COVID-19. 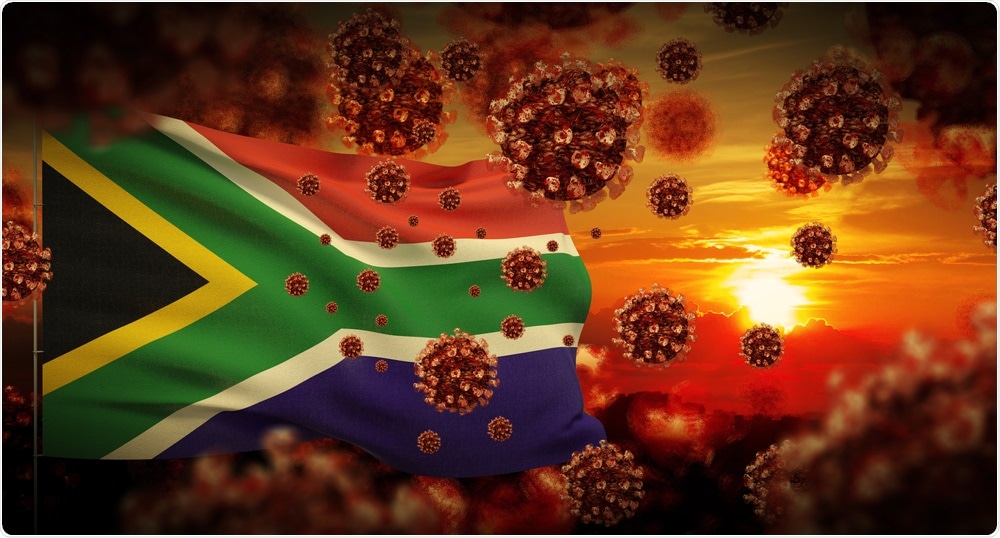 As of October 31, 2021, the COVID-19 pandemic has caused over 5 million deaths worldwide, among more than 247 million infections. While national and state governments have imposed local restrictions on the movement of people, combined with closing down businesses, schools, leisure activities, and travel hubs, these measures have had a significant adverse impact on the global economy.

In response, vaccine development efforts gained momentum, culminating in the rollout of several vaccines at the end of 2020. However, low- and middle-income countries are still far behind in terms of their vaccine coverage, leaving a large population vulnerable to the virus.

New SARS-CoV-2 variants of concern (VOCs) have further exacerbated this situation, leading to further spread of the virus even among immune populations. The SARS-CoV-2 genome is a single strand of ribonucleic acid (RNA) with numerous spike glycoproteins on the envelope. The genome codes for multiple structural, non-structural, and accessory proteins.

The two main transcription units are the open reading frames (ORFs) 1a and 1b, which give rise to polyproteins PP1a and PP1b, respectively. PP1a transcribes four main structural proteins and 16 non-structural proteins (Nsp1-Nsp16) that are involved in viral replication, proofreading, translation, suppression of host translation, immune evasion, and stabilization.

Another third of the genome encodes structural and accessory proteins. The latter is required for proper genome-host interaction and inhibiting cytokine production, among other functions.

The SARS-CoV-2 spike protein is involved in viral binding and entry into the host cell. The spike undergoes cleavage at a unique furin-like cleavage site (FCS) to form the S1 and S2 subunits.

The S1 subunit has a receptor-binding domain (RBD) and an N-terminal domain (NTD). The RBD mediates the attachment of the spike protein to the host cell angiotensin-converting enzyme 2 (ACE2) receptor.

Numerous mutations have been reported in the viral genome. The wild-type strain is considered to be very similar to the Wuhan-Hu-1 strain. With over 200,000 genomes having been uploaded to the Global Initiative on Sharing Avian Influenza Data (GISAID) database, an algorithm was designed early on to map links between genomes. This is called Phylogenetic Assignment of Named Global Outbreak LINeages (PANGOLIN).

Up to February 2020, mutations were rare, but thereafter, the virus spread rapidly, showing multiple mutations, despite its proofreading capabilities. The finding that groups of mutations define different strains led to the differentiation of newer variants into variants of concern (VOCs) and variants of interest (VOIs).

South Africa formed the Network for Genomics Surveillance in South Africa (NGS-SA) to monitor the spread of the virus in June 2020. Over 16 lineages of the virus circulating only in this region were found in the first wave. Of these, there were three clusters responsible for over 40% of infections in this country.

The C.1 was the most widespread of the lineages at this time. The Beta variant, which arose in October 2020, consisted of three RBD mutations, including K417N, E484K, and N501Y, and drove the second wave in this country, displacing the earlier clusters. This strain of SARS-CoV-2 is resistant to pre-existing neutralizing antibodies, with the half-maximal inhibitory concentration (IC50) being 6 to 200-fold higher than required for first-wave lineages.

The third wave was associated with the Alpha, Beta, Eta, and Delta SARS-CoV variants, about two-thirds being caused by the Beta variant and the other three accounting for about a quarter of cases in May 2021. By June 2021, the picture had changed to one where the Delta variant was dominant, at 66% of sequenced genomes, while the Beta caused 16% of cases.

The Delta variant was sequenced in 96% of sampled genomes by September 2021, while C1.2 made up 1%. The latter arose in May 2021 from the C.1 lineage, showing multiple mutations and deletions, with a collection of new mutations that probably confer resistance to neutralization. This variant has spread across most of the country.

In the third wave, the mean daily cases rose by more than half compared to the first two waves, driven mostly by the Delta variant, which is therefore shown to be far more transmissible than the others.

Hospitalized cases are mostly those with severe or critical COVID-19. The greatest increase in the ratio of hospitalized cases to active cases was observed with the transition into the second wave, at over 110%, compared to about 55% and 35% for the first/third and second/third wave comparisons, respectively.

This implicates the Beta variant in the increased disease severity during the second wave, while the Delta variant causes more severe infection than the first cluster.

During all three waves, 72-78% of hospitalized patients were in the general ward, with similar percentages of patients in the intensive care unit throughout. However, those on oxygen increased from about 17% in the first wave to approximately 28% and 22% in the second and third waves, respectively, though ventilation-requiring cases remained stable. Thus, infection with the Beta variant is associated with the highest oxygen-requiring patient percentage.

About 56% of COVID-19 cases in all waves occurred in individuals between the ages of 50 and 69 years, followed by about 15% in those between 40-49 years in the first and third waves. The number of cases in the 60-69 years age group rose from about 16% to 18% from the second wave. Ultimately, older people were targeted by the Delta variant compared to earlier lineages.

Those between 70-79 years made up the next largest segment of deaths, at approximately one in five, during the first and third waves. In the second wave, about 30% of deaths occurred in individuals aged 60-69 years.

Both hospitalizations and mortality among the young in the 0-19 and 0-29 years groups were very low, comprising up to 4.4% and 2% of total deaths, respectively. However, there is no significant difference in the hospital case-fatality rates in the three waves.

The findings from the current study demonstrate that the Beta VOC caused increased disease severity, while the Delta wave caused about 55% higher transmissibility. The percentage of hospitalized patients on oxygen was highest with the Beta variant as well.

The Delta variant caused more cases among those over the age of 70 years than the other two lineage clusters. Overall, most hospitalized patients came from the 50-69 years age group. Mortality did not differ between the three waves, being mainly in the ages of 50-69 years. Children and young people (0-29 years) were affected relatively lightly.