It’s not just a fad! Swimming in cold water may help you lose weight and protect against diabetes, major review finds

It might seem like the last thing you want to do as we head into the winter months.

But going for a swim in cold water could help you lose weight and protect against diabetes, research suggests.

A major review found it could cut ‘bad’ body fat in men and protect against insulin resistance, which can lead to blood-sugar problems.

Swimming in sub-zero temperatures has become increasingly popular in recent years thanks to the rise of wellness gurus and influencers like Wim ‘The Iceman’ Hof.

Weight loss, better mood and a boost to your sex drive are just some of the benefits according to advocates of the growing trend.

Lead study author Professor James Mercer, from The Arctic University of Norway, said it is now ‘clear’ cold water immersion ‘may have some beneficial health effects’.

But the team warned potential pitfalls including hypothermia and heart and lung issues mean it does not come without risk.

Scientists believe cold water triggers the release of fat-busting hormones, which can help to protect against obesity and heart disease. 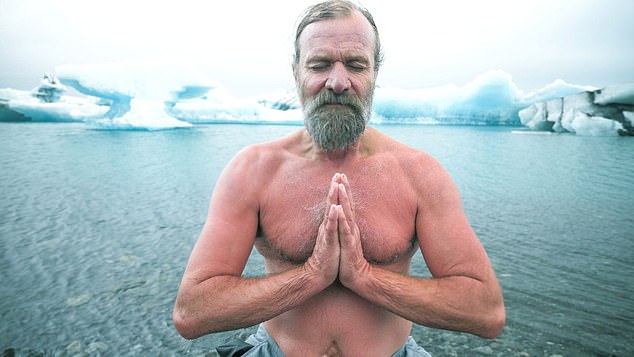 The review of 104 studies looked at the effects of cold water blood circulation, the immune system, inflammation and oxidative stress.

Taking a dip in water with temperatures below 20C (68F) was found to activate brown adipose tissue, a type of ‘good’ body fat which burns calories to maintain body temperature.

It also increased production of the protein adiponectin, which plays a key role in protecting against insulin resistance, diabetes and other diseases.

Repeated cold-water immersions over winter significantly increased insulin sensitivity and decreased insulin concentrations, according to the findings published in the International Journal of Circumpolar Health.

But the researchers were left undecided over heart health with conflicting findings.

Some studies suggested cardiovascular risk factors improved in swimmers who have adapted to the cold while others found it increased the workload on the heart.

Many studies involved small numbers of participants, often of one gender, and with differences water temperature and salt composition, they conceded, with more in-depth work needed.

Professor Mercer added: ‘Many of the studies demonstrated significant effects of cold-water immersion on various physiological and biochemical parameters.

‘But the question as to whether these are beneficial or not for health is difficult to assess.

‘Based on the results from this review, many of the health benefits claimed from regular cold exposure may not be causal.

‘Instead, they may be explained by other factors including an active lifestyle, trained stress handling, social interactions, as well as a positive mindset.

‘Without further conclusive studies, the topic will continue to be a subject of debate.’

It might feel horrible. But shivering may actually benefit you, by potentially cutting your risk of type 2 diabetes.

Fifteen fat volunteers were exposed to temperatures as low as 10C (50F), similar to that of a cold bath or a shower.

But instead of bravely taking a dip, the volunteers wore a special water-perfused suit that controlled their temperature for them.

All of them were made to shiver for an hour a day, for 10 consecutive days.

Academics at Maastricht University took blood glucose tests from the participants before the experiment began, as well as then straight after.

Results revealed their blood sugar levels dropped from from 5.84 to 5.67 mmol/L, on average — the equivalent of roughly 6 per cent.

Blood pressure readings — which tend to be higher in fat people — also fell by 8.4 per cent.

Adam Sellers and team said it showed cold exposure could be an ‘alternative strategy for the treatment and prevention of type 2 diabetes’.

Type 2 diabetes affects roughly 4million people in Britain and 37million in the US.

It occurs when the body doesn’t make enough insulin or if the hormone it does make doesn’t work properly — leading to high blood sugar levels.

When people eat carbohydrates, the food is broken down into blood sugar.

This causes glucose levels to rise.

As a result, the pancreas starts to release insulin — which allows the body to use the glucose for energy.

But over time, high blood sugar levels can cause insulin resistance.

Because the insulin isn’t as effective at breaking down the sugars, it causes the body to produce more and more of it.

Eventually, this leads to the pancreas becoming worn out, sending the system out of whack and causing blood sugar levels to stay high.

Uncontrolled diabetes can lead to blindness and leave patients needing their limbs amputated or in a coma.

Previous research has shown that glucose is cleared quicker when the body is cold because it triggers fat reserves to generate heat, which happens by burning excess calories stored internally.

It is, for this exact reason, that some experts suggest that going for a cold bath or shower could help people trying to lose weight.

The latest study suggests the quick muscle contractions in shivering also help kick-start a metabolic response in the same way.

But more research is need to confirm the exact mechanism before it could ever be advised in people.

Lead author Adam Sellers said: ‘This is an important first step investigating the effect of shivering on health.

‘Our findings are promising and may have important health implications, given that shivering improved many cardiometabolic health outcomes which are associated with diseases like type 2 diabetes.’

Experts presented the research as an abstract at European Association for the Study of Diabetes (EASD) Annual Meeting in Stockholm, Sweden.

Shivering was measured with special devices placed on the skin which sense muscle electrical activity because not everyone visibly shows they are shaking.