Across the nation’s five heatwave periods – that set record temperatures as the mercury surpassed 40C (104F) – an extra 3,200 fatalities were logged.

The figure is the highest ever excess mortality seen during summer heatwaves since records began nearly two decades ago.

And statisticians expect it will only climb higher, as delayed death registrations continue to trickle through.

Almost all fatalities occurred among the over-65s, in what health chiefs say demonstrates the deadly impact rising temperatures can have on at-risk groups. 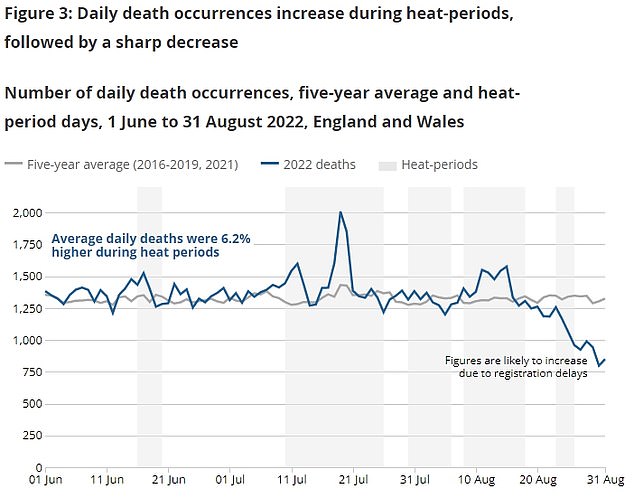 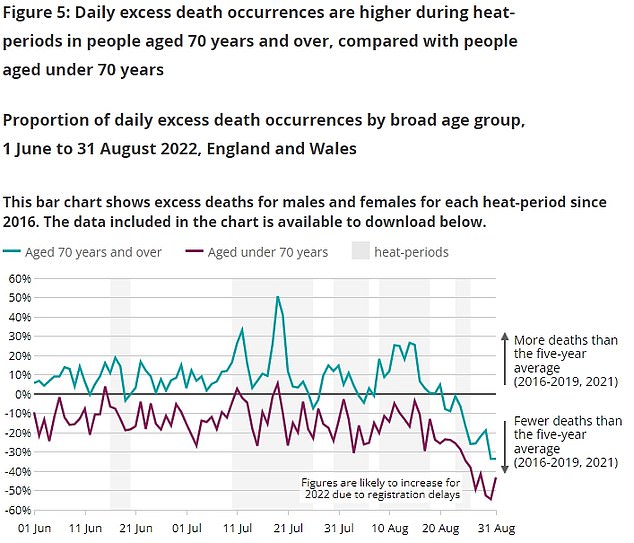 The graphic from the ONS shows the proportion of daily excess deaths among the over-70s (blue line) and under-70s (pink line) in England and Wales. Death rates jumped among the both cohorts during heatwaves (shown in grey bars), although fatalities were still largely below the five-year average among the under-70s 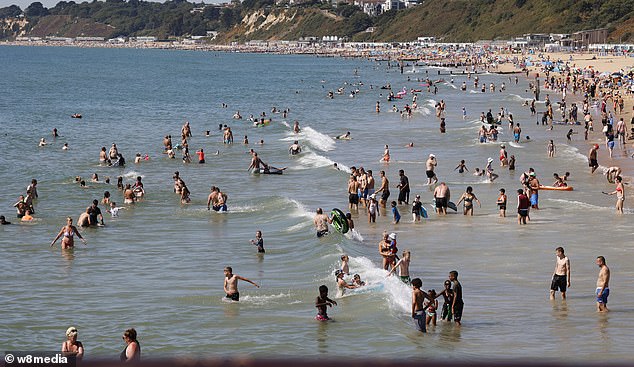 Hot weather can cause dehydration, which causes blood to thicken. It also lowers blood pressure, making it harder to push blood around the body. This can lead to blood clots and strokes.

Overheating can make symptoms worse for those with heart and breathing problems – which can become fatal.

There is also a higher risk of heat exhaustion and heat stroke, especially if exercising outdoors when it’s hot. This is caused by not drinking enough and losing fluids through sweat.

Studies have also found accidents and injuries, such as from car crashes, are higher worldwide during hot spells.

Experts believe this is because heat can interfere with thinking, making mistakes more likely.

The data, released in a joint report by the Office for National Statistics (ONS) and the UK Health Security Agency (UKHSA), shows the deadly effects of this summer’s scorching temperatures.

Analysis by the ONS found that between June and August, 56,303 deaths occurred in England and Wales.

The figure is 3,271 (6.2 per cent) more than expected – defined as those over the five-year average for that time of year.

The second heatwave was the most deadly, with 2,227 deaths logged – 10.4 per cent above the average.

Each period of extreme heat was followed by a sharp fall in deaths.

Statisticians said this suggests a short-term mortality displacement – when deaths among the vulnerable that were going to happen anyway are ‘brought forward’ to within heat periods.

Separate number crunching from the UKHSA found there were a total of 2,803 deaths than expected over the five heatwave periods this summer.

The figure is slightly lower than the ONS’ as it does not include deaths among the under-65s, those that occurred in Wales and excludes Covid deaths.

It shows that over the four days from July 17 to 20, there were 1,012 excess deaths among the over-65s. These are classed as any deaths above the five-year average.

During that period, some parts of England logged temperatures of over 40C (F) for the first time and the UKHSA issued its first ever level four heat health alert.

Meanwhile, from August 8 to 17, 1,458 more fatalities were logged in that cohort.

Isabel Oliver, chief scientific officer at the UKHSA, said: ‘These estimates show clearly that high temperatures can lead to premature death for those who are vulnerable.

‘Higher excess deaths occurred during the hottest days this year and a warming climate means we must adapt to living safely with hotter summers in the future.

‘Prolonged periods of hot weather are a particular risk for elderly people, those with heart and lung conditions or people who are unable to keep themselves cool such as people with learning disabilities and Alzheimer’s disease.’

Sarah Caul, head of mortality analysis at the ONS, said: ‘During the UK summer of record-breaking temperatures, there was an increase in deaths.

‘However, these spikes around the hottest days were followed by periods of below average mortality.

‘This is likely to be a result of short-term mortality displacement, especially among older age groups, where people died a few days or weeks earlier than expected.

‘This trend is consistent with what we have seen in previous summers with heatwave periods.

‘It is also the case that despite peaks in mortality during heatwaves, the majority of days in the winter period (December to March) show a higher number of deaths than we see during summer.’