Molnupiravir is the first orally-available antiviral treatment that can be administered directly to people with mild-to-moderate coronavirus disease 2019 (COVID-19). 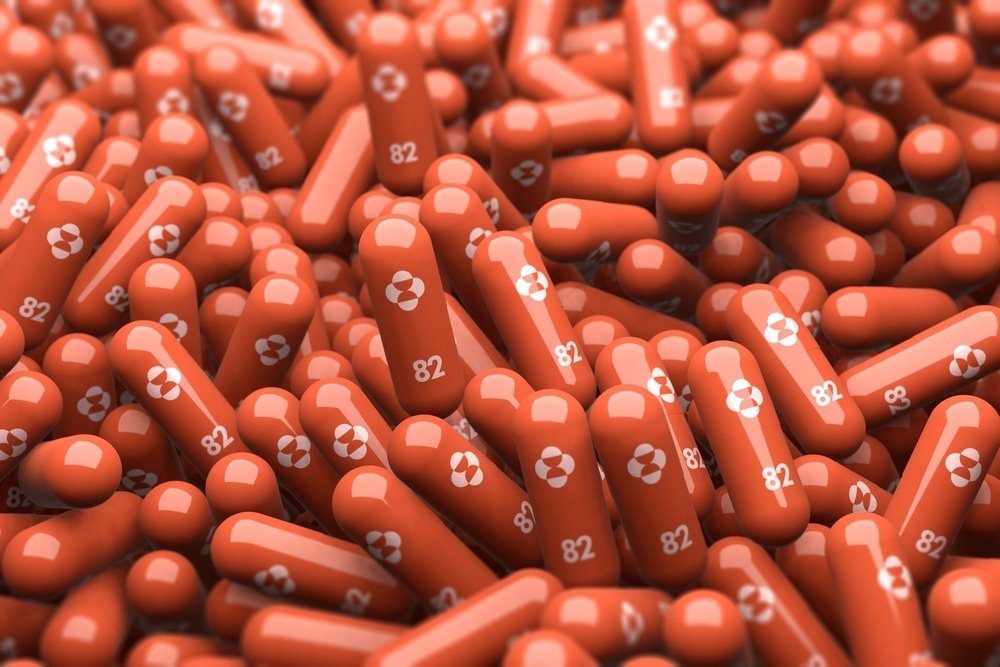 Previous studies have observed the optimal dose for molnupiravir to be 800 mg for five days with administration every 12 hours.

Molnupiravir has been shown to effectively reduce the risk of hospitalization and death in treated patients. Furthermore, this treatment has been associated with a higher severe acute respiratory syndrome coronavirus 2 (SARS-CoV-2) negativity rate following five, ten, and 14 days of treatment.

Nevertheless, in vivo, long-term safety studies of molnupiravir have not been conducted. Additionally, the emergence of new SARS-CoV-2 variants has caused a loss of efficacy for several monoclonal antibodies; therefore, monitoring the efficacy of directly-acting antivirals against new variants is needed.

A new study published on the preprint server medRxiv* reports the phase II efficacy and safety of molnupiravir in both unvaccinated and vaccinated individuals in the United Kingdom.

The current study was designed as a randomized, double-blind, and controlled trial that included men or women above 18 years of age with reverse transcription-polymerase chain reaction (RT-PCR)-confirmed COVID-19.

Study participants were included if they were within five days of symptom onset, experienced mild or moderate disease, had no other chronic disease, had no allergies to medications, and had not received any other experimental medication within 30 days of the study.

Both women who were of childbearing age and men were required to use two effective contraceptive methods that would be effective during the study period, as well as for 50 and 100 days after the study.

Molnupiravir was administered at a dose of 800 mg for a total of ten doses twice daily for five days. Study participants were randomly assigned to receive either molnupiravir or the placebo drug after two hours of fasting. The participants were also to fast for one hour after administration of the drug.

Nasal swabs were collected from participants at screening as well as on days one (baseline), three, five, eight, 11, 15, 22, and 29 for the assessment of efficacy and safety. Hospitalization rates, time to hospitalization, the occurrence of serious adverse events, and duration of oxygen use were recorded on days 15 and 29.

A total of 180 participants who had symptomatic SARS-CoV-2 infection were included in the current study. The median age of the participants was 43 years.

Moreover, 57% of the participants were female, and 50% received at least one dose of the COVID-19 vaccine at least 14 days before the study period. The SARS-CoV-2 variants represented among the participants included Alpha, Delta, Omicron, XE, and EU1 variants.

The time to negative RT-PCR result was eight days for molnupiravir and 11 days for placebo. These results were similar among both vaccinated and unvaccinated participants. Moreover, a reduction in viral load and an increase in viral clearance were observed in participants who received molnupiravir.

Administration of molnupiravir was not associated with death or requirement of mechanical ventilation among study participants during the trial. Additionally, a low frequency of severe adverse events was reported in participants who received molnupiravir and did not require any hospitalization.

The study has certain limitations. First, the number of participants was limited. A second limitation was that the clinical tools used in the study could not detect small changes among ambulatory patients.

The researchers also did not culture the virus. Furthermore, the time to RT-PCR negativity might not be effective in monitoring any impact of molnupiravir.