Giving sight to the blind was once just the vision of science fiction but a pioneering new visor is now helping five patients battling blindness to see again.

The Star Trek-style headgear – evocative of the iconic prosthetic worn by Lieutenant Commander Geordi La Forge – tackles a common cause of visual impairment.

Much like the gadget adorning the cult character, the glasses translate visual information from the outside world into images that the wearer can perceive.

Volunteers with age-related macular degeneration who took part in a trial of tech firm Pixium Vision’s ‘bionic’ system were able to read letters using the device.

The gadget is made up of a pair of goggles fitted with a video camera, attached to a small computer processor.

Before they can relay images, however, patients must have a light-activated computer chip placed behind their retina at the back of the eye.

This tiny processor converts the visual information received by the visor into an infrared image that the goggles then beam back into the eye.

Electrical pulses activate electrodes in the 2mmx2mm chip, which sends a signal down the optic nerve that the brain can construct into an image of what’s being seen. 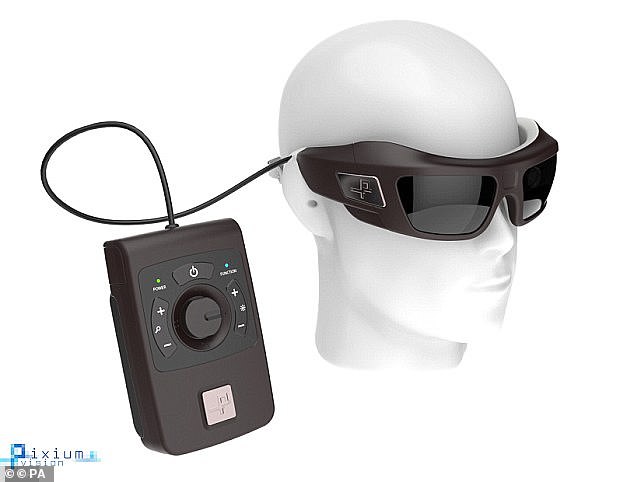 The revolutionary device is effectively a pair of goggles fitted with a video camera and attached to a small computer processor. But before they can relay images, patients need a light-activated chip that is inserted behind their retina at the back of the eye 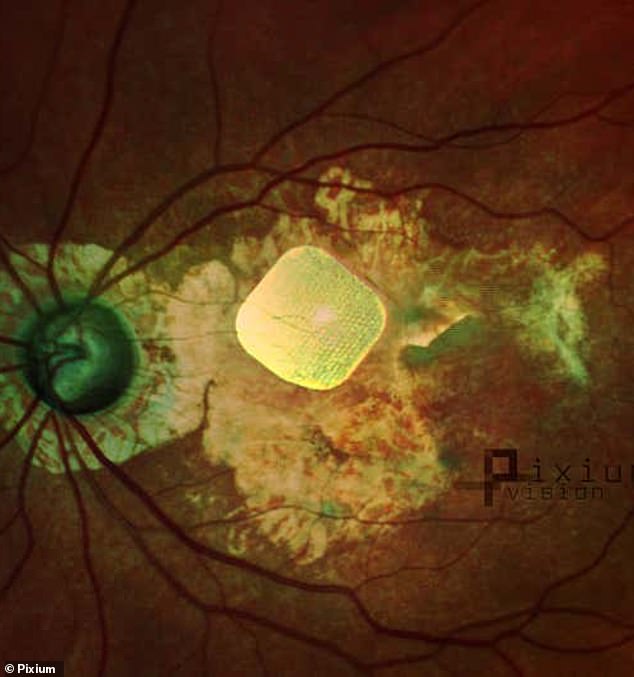 This is because the pocket-sized processor converts the recording into an infrared image that the goggles beam back into the eye. Pulses then activate electrodes in the 2mmx2mm chip, which causes the optic nerve to carry the images to the brain 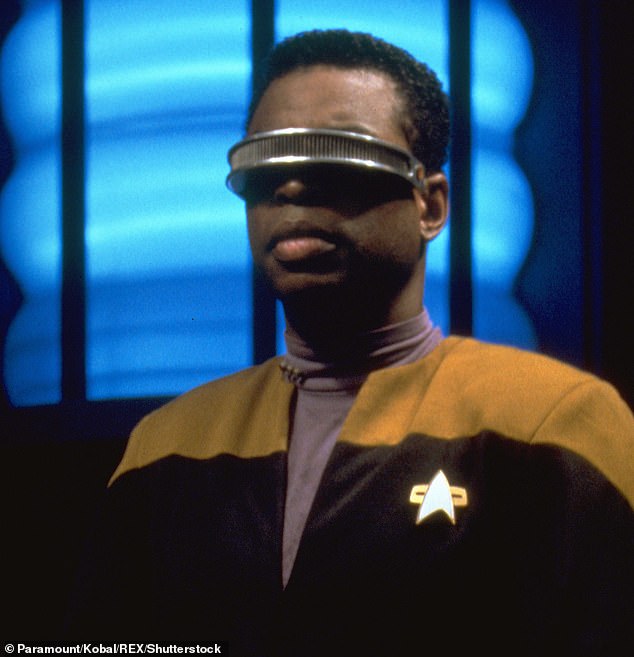 Pictured: Star Trek character Geordi La Forge, who was born blind, wearing a visor in an episode of the sci-fi series that helps him see

AMD is the most common cause of blindness and affects 600,000 people in the UK, and around 11million in the US.

Currently, there is no way of treating the ‘dry’ form of the condition – the same type tested in the trial by Pixium Vision.

The chip it has developed contains almost 400 electrodes – designed to ‘excite’ cells in the retina to carry images to the brain.

It is implanted under the retina, where damaged photoreceptors are found. The firm claims the procedure is minimally invasive.

The patients involved in the trial, conducted at the Hopital des Quinze Vingts in Paris, all had the ‘dry’ form of AMD – the more common type.

It affects the central part of vision with gaps or ‘smudges’, making everyday activities like reading and recognising faces difficult. 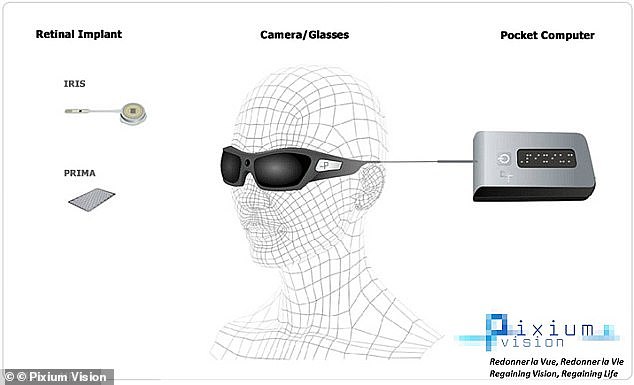 The patients involved in the trial, conducted at the Hopital des Quinze Vingts in Paris, all had the ‘dry’ form of AMD – the more common type (a newer generation version of the system) 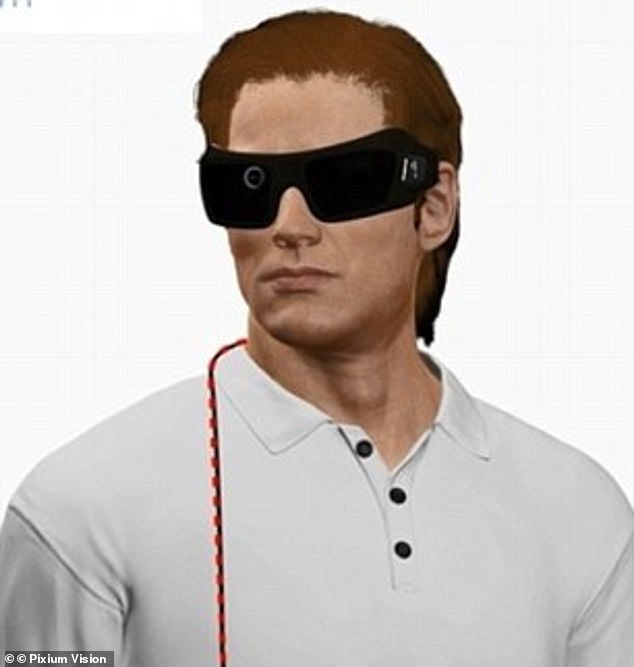 Other trials of Pixium Vision’s system, called Prima, are already under way in Pittsburgh and Miami, NewScientist reported

HOW DOES IT WORK?

A surgeon first implants a small silicon chip with 378 electrodes behind the retina of a patient with dry age-related macular degeneration.

When the patient puts on the system’s dark glasses, an integrated video camera mounted onto the goggles sends images to a portable computer.

A connected ‘pocket processor’ converts that recording into an infrared image, which the goggles will then beam into the eye.

Pulses activate electrodes in the implant, which ‘excites’ cells in the retina to carry images to the brain through the optic nerve.

After surgery, patients have to learn to use the system, but with practice are able to ‘see’ black, white and grey shapes.

The firm, also based in the French capital, said there were no serious complications reported by any of the patients after 12 months.

‘There is of course some rehabilitation on their part to interpret the signals, but most are seeing light and even patterns, numbers, or letters where they didn’t before.’

However, their vision is still affected because the implant only creates images at less than 400 pixels.

He said the chip – which works by converting light into electricity – does not move after it is implanted because tissue grows around it.

Mr Diamond added: ‘An integrated mini-camera mounted on glasses is used to capture the visual surroundings. 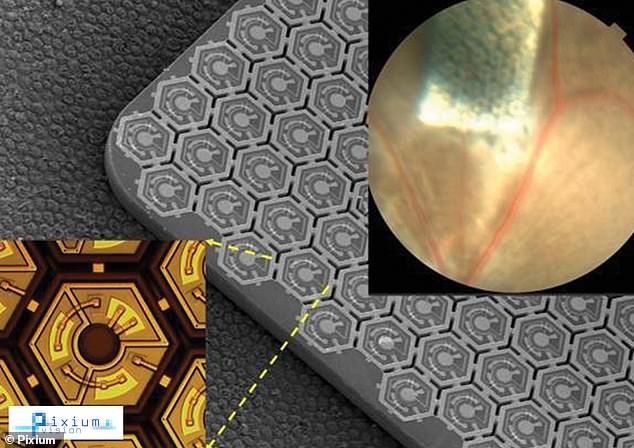 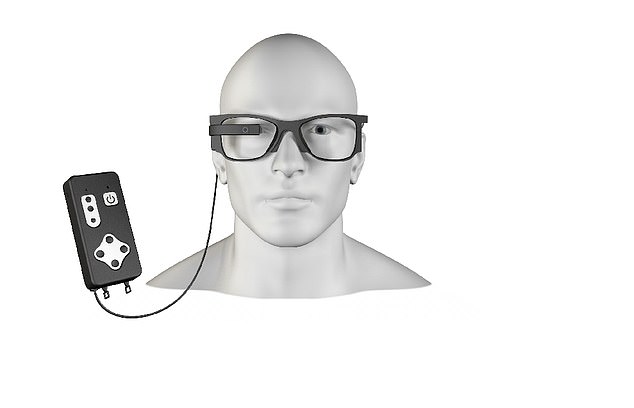 WHY IS DRY MACULAR DEGENERATION?

Dry macular degeneration is a common eye disorder among people over 65.

It causes blurred or reduced central vision due to thinning of the macula, which is the part of the retina responsible for people’s direct line of sight.

More than 1.75 million people suffer in the US. The condition’s UK prevalence is unclear.

The wet form of the disorder occurs due to leaking blood vessels under the retina and causes more sudden vision loss than the dry form.

Symptoms are usually painless and include:

It rarely causes blindness due to peripheral vision being unaffected.

The cause is unclear and may be a combination of genetic and environmental factors, such as smoking.

It can be prevented via routine eye exams, managing conditions such as high blood pressure, not smoking and eating well.

There is no cure.

Treatment may include meeting with a low-vision rehabilitation specialist or surgery to implant telescopic lenses.

‘This visual scene is processed and simplified by the pocket computer through algorithms driven by AI.

‘This process extracts useful information, in a simplified format, from the images that are then sent back to the glasses.’

The digital projector then sends the images via pulses of infrared light, which activates the photovoltaic chip, he said.

After surgery, patients have to learn to use the system, but with practice are able to ‘see’ black, white and grey shapes.

Mr Diamond said the company has an ‘aggressive’ commercialisation plan and hopes to launch its product in Europe and the US.

Other trials of Pixium Vision’s system, called Prima, are already under way in Pittsburgh and Miami, NewScientist reported.

And an even bigger study is planned for next year, with the aim of enrolling patients at various eye-care centres across Europe.

Pixium Vision said it is working to improve the algorithms involved in the system – and has recently announced a new generation device.

Retinal implants that restore some sight when in the blind are already available, but their quality isn’t good enough to work in many real-world conditions.

Experts also hope the implants could be used to treat retinitis pigmentosa, an inherited condition that slowly constricts vision.

It comes after the Mail earlier this month revealed doctors have restored sight to the blind by sending video images directly to the brain.

In a world-first that offers hope to millions of patients, five men and one woman regained vision after years of ‘living in the dark’.

They had electrode chips planted in the visual cortex at the back of their skulls that picked up images from a tiny video camera mounted in a pair of glasses.

Patients who have benefited from the Orion tech include those who have lost their sight due to glaucoma, trauma and infections.