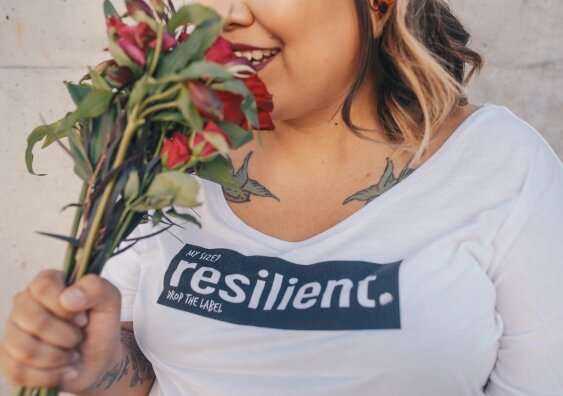 Researchers from the School of Psychology, UNSW Science, tested whether viewing just a few body positive social media posts a day could positively impact body satisfaction and appreciation. In other words, could seeing a range of messages challenging unrealistic beauty ideals and promoting body acceptance at every shape and size help participants feel more secure about their bodies?

They found women aged 18–25 who viewed body positive posts daily over a 14-day period reported a decrease in body dissatisfaction and less tendency to compare their appearance with others. Their improvements in body image were also maintained four weeks after viewing the content.

With the sheer amount of time spent on social media alone—the 159 participants in the study reported spending an average of two hours on Facebook on a regular day—even a small change in use can have a large impact.

“Body image is a huge issue globally. So, we need to try and improve people’s body image, especially through social media, where a lot of people spend their time and from a young age are flooded with societal beauty ideals,” Dr. Fardouly says.

“Being unhappy with your body is a risk factor for many mental health disorders. It’s an important predictor of eating disorders and depression and is also linked to some anxiety disorders,” Dr. Fardouly says.

Most young women around the world use social media. Content on social media that depicts unrealistic beauty standards is, at least in part, responsible for high rates of body dissatisfaction.

“It places a lot of pressure on young girls to look a certain way, at a time where the importance of peer acceptance and of being attractive to prospective romantic partners is salient,” Dr. Fardouly says.

But beauty ideals are promoted throughout society to kids from a young age. Think about the archetype of a Disney princess, which many young girls look up to, Dr. Fardouly says. With very few exceptions, they present a narrow depiction of body proportions and beauty, not to mention other gender and cultural stereotypes.

“Kids as young as six report body image concerns. Young girls, in particular, say things like “I need to be thinner’ and report dieting to lose weight,” Dr. Faroduly says. “Social media is the newest place where these beauty ideals are disseminated, promoted and reinforced. While the ideals are not new, they’re intensified because of these platforms.”

Viewing curated, edited or enhanced images of young women who match narrow societal beauty ideals on social media can increase body dissatisfaction among young women. Users compare their appearance to the women in those images and judge themselves as less attractive.

“There’s a lot more opportunity to compare to others and internalize narrow societal appearance ideals,” Dr. Fardouly says. “But when we’re comparing via social media. We’re not seeing the complete representation of someone; we only see their most ideal side.”

Instead of celebrating clear skin, shiny hair and tiny waists, the body positive movement aims to challenge unattainable beauty standards. The content promotes acceptance of all bodies and encourages a focus on function and health rather than physical appearance.

“We need to see bodies of different types, shapes, sizes and colors to be able to challenge society’s beauty ideals,” Dr. Fardouly says. “As the study shows, seeing this content is a way to make social media a less harmful environment for body image.”

The study’s findings are consistent with previous research on the effects of viewing positive body content on social media. The research, co-authored by Dr. Fardouly, found brief exposure to such content on Instagram improved women’s body satisfaction and mood.

“We see this strategy as a micro-intervention—a small change we can make to improve people’s experiences on social media and how they feel about themselves in everyday life,” Dr. Fardouly says. “In the current study, just one post a day was potentially enough to induce positive effects. More exposure may be even more effective.”

Interestingly, another group of participants in the study viewing appearance-neutral posts—content unrelated to a person’s looks—also reported a decrease in body dissatisfaction.

Other intensive interventions, such as ‘detoxing,” can also be effective and boost our well-being. But they are unlikely to be implemented en masse for long periods, particularly by adolescents.

“It’s very unrealistic to expect that adolescents will stop using social media altogether, so it’s not an effective long-term strategy. Social media isn’t going away. But as we’ve shown, it’s also not really the time you spend on it, it’s what you’re doing when you’re on it,” Dr. Fardouly says.

As social media platforms become more image and video-based, Dr. Fardouly says it’s even more critical for people to see content that accurately reflects the diversity of appearance in society.

“Platforms could incorporate more diversity into their algorithms. They can choose to put more body positive content into people’s feeds and promote it more prominently,” Dr. Fardouly says.