The real-life Simpson’s character! Six-year-old boy’s skin turns YELLOW because he eats so many oranges

Convincing your children to eat fruit and vegetables is one of the hardest parts of parenting.

Not for Charlotte Travers, though.

Her six-year-old Thomas absolutely loves eating oranges and satsumas, sometimes munching through a whole bag in a day.

Yet, it has a downside — it turns his skin yellow.

Ms Travers, 32, from Paignton in Devon, jokes about the phenomenon now, calling her son ‘Thomas Simpson’, in a nod to the famous cartoon and the characters’ yellow skin. 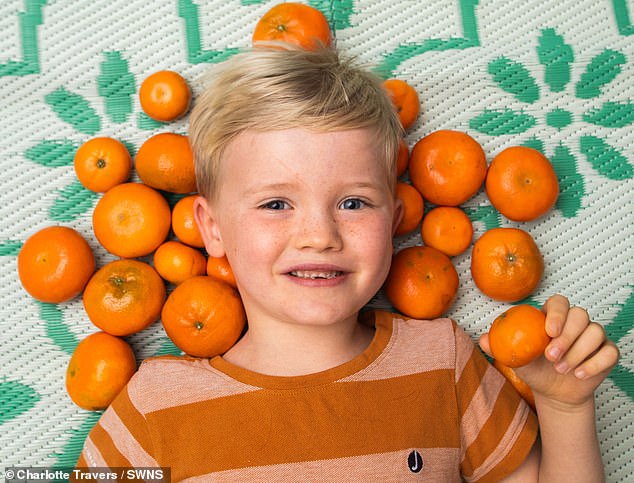 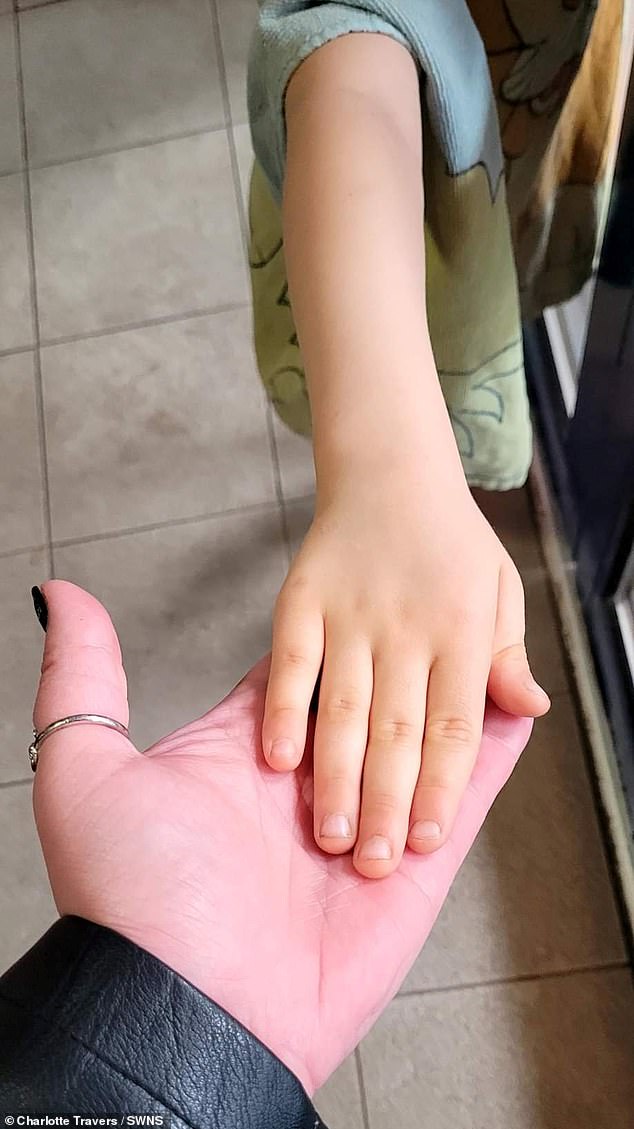 At first, however, the change in colour alarmed her. Even the family GP was baffled on what was the cause.

‘He started turning yellow and I was quite worried because it can be a sign of kidney or liver failure,’ she said.

‘I thought I’d take him to the doctor just in case, you never know.’

Yellow skin is most famously caused by jaundice, a sign of a problem in organs like the liver and kidneys.

It can be a sign of a serious condition like liver disease as a substance called bilirubin builds-up in the body, causing tissues to turn yellow.

Thomas’s GP didn’t suspect anything sinister, given he didn’t have yellow eyes — a tell-tale sign of the condition. 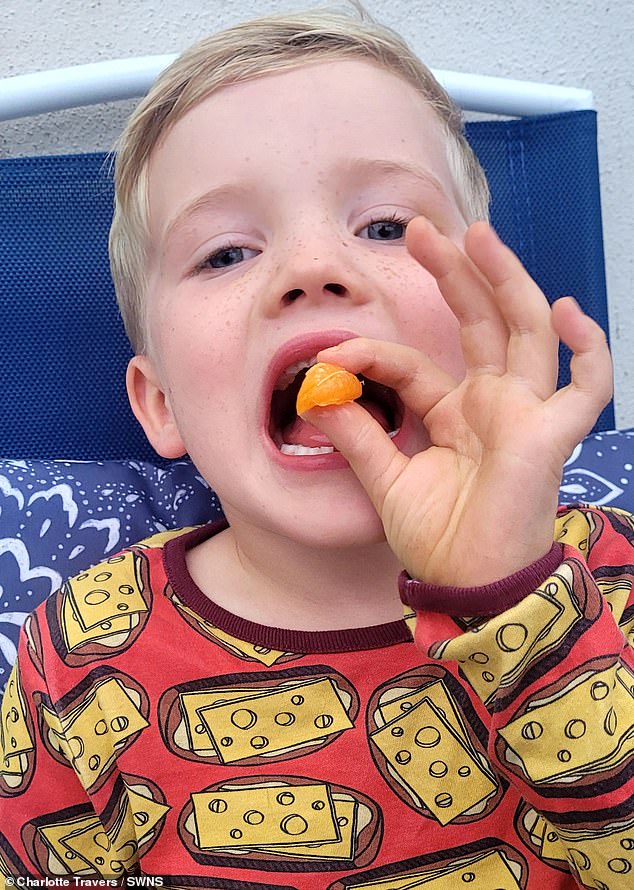 Thomas’s mother Charlotte, said her son sometimes ate a bag of oranges or satsumas per day 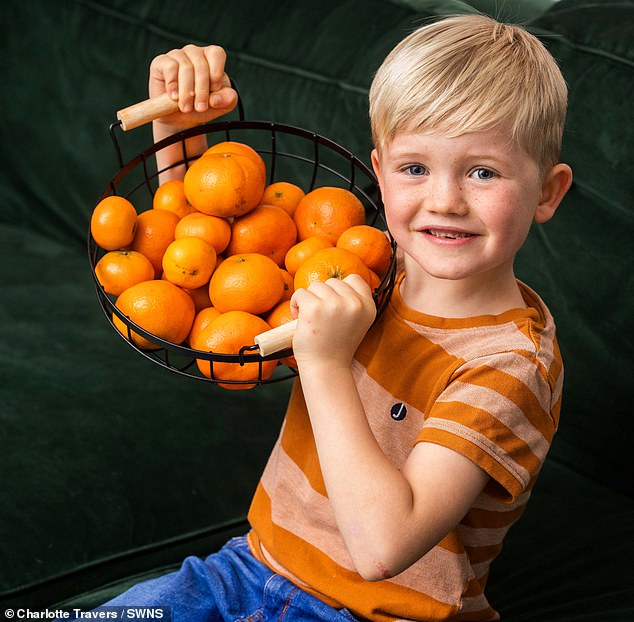 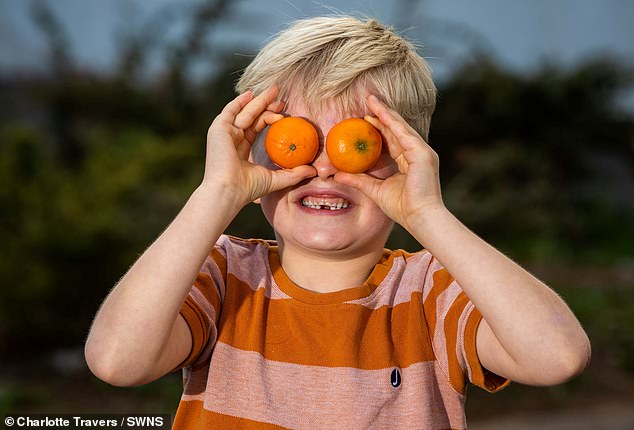 While harmless, too much of the substance can build-up in the body, giving the skin a yellow-tinge. This can be mistaken for jaundice, a condition that yellows the skin as a result of organs struggling to function

How eating too many oranges can turn your skin yellow

This substance is found in high levels in yellow and orange fruit and vegetables and gives them their distinctive hue.

High levels can be found in carrots, mango, apricots and oranges.

Eating a large amount of these foods over a long time can cause your skin to turn a yellow-orange colour as beta carotene accumulates in the body.

There is no known negative health conditions linked to consuming too much beta carotene.

As part of a balanced diet the substance it is actually beneficial.

This is because the human body can turn beta carotene into vitamin A.

Some people take a beta carotene to dye their skin supplement as a substitute for natural tanning.

Ms Travers said: ‘She said sometimes children can just get stained skin from playing in the mud or sand.

‘But this was more than that — so we did blood tests to rule anything out but they all came back normal.’

The domestic abuse support worker then told the GP about her son’s unusual eating habits, which can see Thomas eat a bag of oranges or satsumas every day.

From then, the riddle was solved.

‘I never in a million years would have thought that was what was causing his skin to turn yellow,’ she said.

Oranges — and other fruits, such as mangoes, apricots and pumpkins — contain a natural pigment called beta carotene.

This substance gives them their distinctive hue.

Over time, consuming excessive amounts of beta carotene can cause the skin to turn a yellow-orange colour.

Carotenemia, as it is medically known, is harmless.

But it can take several months for the skin to return to a normal colour.

There is no known negative health conditions linked to consuming too much beta carotene.

As part of a balanced diet, the substance it is actually beneficial.

This is because the human body can turn beta carotene into vitamin A, which helps the immune system, eyes and skin.

‘I have a rule in our house that if it’s in the fruit bowl you can have as much as you’d like — and that hasn’t changed,’ she said.

‘When the doctor told us about what the cause was, we both thought it was absolutely hilarious.

‘We now joke about and call him Thomas Simpson.’