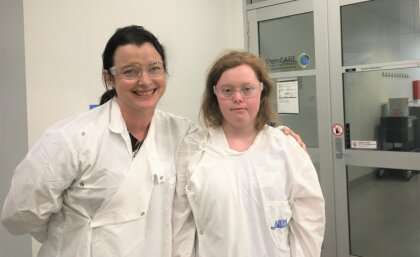 When clinical psychiatrist and University of Queensland researcher Dr. Cathy Franklin saw her first patient with Catatonia and Acute Regression in Down syndrome in 2009, she was shocked.

The condition strikes young people with Down syndrome, who might previously have been active and high functioning, causing them to suddenly regress.

“These young people can go from being able to talk, perhaps work part-time, dance, sing and engaged in their community—to suddenly being non-verbal and very slow,” Dr. Franklin said.

“They can sometimes take three to four hours just to eat breakfast.

“This condition is devastating for the person and their family—and we don’t know what causes it.”

Since her first patient in 2009, Dr. Franklin has now seen about 15 people with the condition, prompting her to launch the Investigation of Catatonia and Acute Regression in Down Syndrome (ICARDS) Study at Mater Research, in collaboration with UQ’s Australian Institute for Bioengineering and Nanotechnology (AIBN) and the Queensland Brain Institute (QBI).

The condition typically strikes when people with Down syndrome are aged 15 to 25 years old, but the cause is unknown.

“First, we noticed jerking, erratic pacing, especially at social events and she could no longer concentrate,” her mother Fiona Steele said.

“Then she stopped talking and needed assistance with basic daily activities such as getting dressed.

“The change in Ursula occurred so quickly—in just four months.

“It has been awful watching our beautiful, vibrant young woman become a shell of herself and not have any idea why.

“We joined the study to find answers for Ursula and to alert the Down syndrome community so no other family needs to watch their child go through what Ursula has.”

Dr. Franklin said while the medical care journey with Down syndrome can sometimes be difficult, this condition is one of the worst experiences patients and their families face.

“As a psychiatrist, the last thing I want is to be missing a medically treatable condition, and I fear this could be the case with Catalonia and Acute Regression in Down syndrome,” Dr. Franklin said.

“We know that we can use psychiatric medications to treat the symptoms but have not found the cause which could be related to an autoimmune condition or to the amyloid in Alzheimer’s disease.

“People with Down syndrome are predisposed to developing both.”

The study, now in its final year, aims to recruit 30 people with Down syndrome—15 people with regression and catatonia and 15 people who are well.

“We have nearly reached our target for the regression group, but still looking for more people to join the study, especially people with Down syndrome who are well,” Dr. Franklin said.