With the coronavirus disease 2019 (COVID-19) pandemic showing no signs of ending soon, the definitive way out is the achievement of population immunity by either vaccination or natural infection. With the unacceptably high mortality rates associated with the latter route, the development of effective vaccines that can induce neutralizing antibodies against the disease’s causative agent – severe acute respiratory syndrome coronavirus 2 (SARS-CoV-2) – is a matter of urgency.

Therapeutic antibodies and those elicited by current vaccines are effective in neutralizing viral antigens belonging to the spike protein of SARS-CoV-2. However, as new variants emerge, understanding the epitopes to which these protective antibodies bind is an important area of study. It is also necessary to explore the development of natural resistance to neutralization because of these variations.

A new paper published in the journal Cell Host & Microbe describes the experimental selection of SARS-CoV-2 mutants associated with resistance to antibodies, with important implications for vaccine development and therapeutic antibody use. 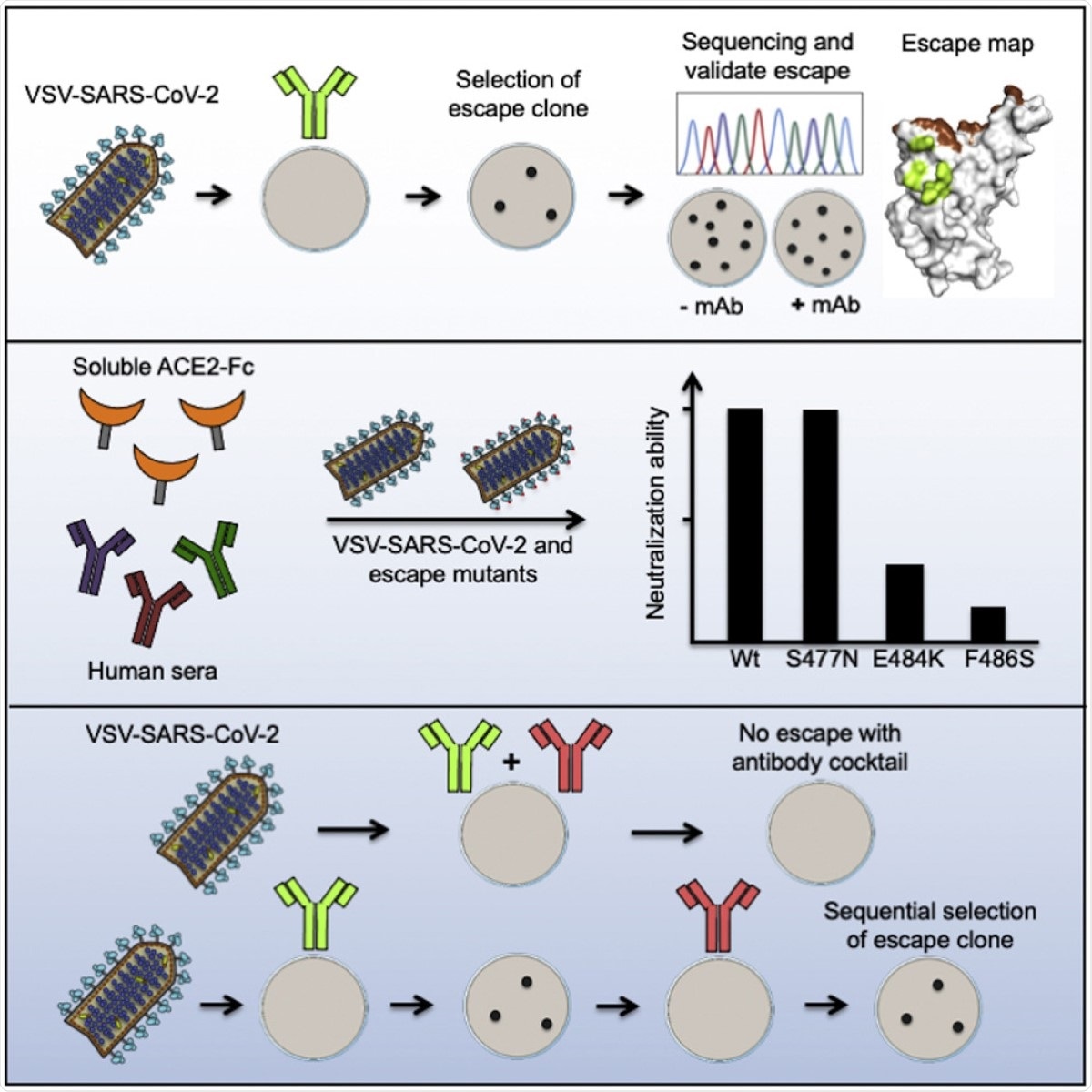 In any RNA virus, there are multiple variant genome sequences, forming a swarm or quasispecies, around a core consensus genome. When neutralizing antibodies or drugs act on the virus, some variants will be selected because of their resistance to neutralization. This leads to the emergence of resistant variants, provided these have high fitness.

The coronaviruses have a relatively low mutation rate among RNA viruses. This is because of the presence of a proofreading enzyme to correct random changes in the RNA genome introduced by the viral RNA-dependent RNA polymerases (RdRp).

However, the SARS-CoV-2 spike gene still shows over 4,000 mutations, which have caused over 1,200 amino acid substitutions. Of these, almost 190 are in the receptor-binding domain (RBD). The presence of a large number of viral variants in circulation indicates the retention of viral fitness.

Such non-synonymous mutations may persist due to host adaptation, selection of escape mutations by neutralizing antibodies formed during natural infection, and perhaps the reinfection of individuals with weakened immunity.

After treating with neutralizing antibodies, the researchers sequenced plaque-forming variants. These isolates were then allowed to infect cells in the presence and absence of antibodies to confirm that they were resistant.

The researchers were able to isolate 50 escape mutants with multiple substitutions in the RBD, often within the region of direct contact with ACE2. This suggests that with many neutralizing antibodies that bind to the side of the RBD, the mechanism of action is by allosteric interference with spike-ACE2 binding. Another possible mechanism is by inhibiting the interactions of the virus with other attachment factors.

For mutations at the RBD base, allosteric inhibition of the ‘up’ conformation required for its binding to the ACE2 receptor may contribute to the resistance.

The researchers recommend further study of the S477N mutation, a fairly common spike variant, because of its broad resistance to the panel of monoclonals studied here. However, this mutation was still susceptible to neutralization by human immune sera, indicating that this epitope is not immunodominant in humans.

The E484 substitution by any of four possible residues was associated with escape from neutralization by four polyclonal human sera. One of the four sera was susceptible to escape only by a change at this position. Substitutions at E484 led to an increase in infectivity even in the presence of multiple sera.

Several other substitutions allowed escape from inhibition by two or three sera.

On the other hand, the F486S mutation was associated with escape from inhibition by multiple antibodies, as well as by soluble recombinant human ACE2, which was expected to act as a decoy for the virus, preventing its binding to the host cell ACE2 receptor.

When they compared the 50 resistant variants with the clinical isolates, they found that some variants already in circulation are resistant to both monoclonals and polyclonal antibodies. “Neutralizing mAbs against RBD can select for variants or changes at positions that already exist within the human population.”

The researchers were also able to demonstrate that the emergence of such escape mutants could be slowed, if not completely blocked, by using cocktails of monoclonal antibodies. Such combinations bind to different epitopes on the spike protein. However, if circulating strains already contain escape mutations to one of the antibodies in the cocktail, additional escape mutations may be selected.

The study shows that several escape mutants, such as S477N, are resistant to neutralization by multiple monoclonal antibodies. Others like E484K show escape from neutralization by human immune sera. The latter finding indicates that the polyclonal neutralizing response in some convalescent patients, at least, is due to antibodies that bind only a few epitopes.

A good number of the escape mutants, such as E484, identified here show substitutions at residues where circulating isolates already display mutations. This implies that escape variants can emerge in the presence of such a limited polyclonal response. This would limit the usefulness of vaccines that induce these neutralizing antibodies, indicating the need to increase the spectrum of neutralizing antibody responses.

Secondly, effective therapeutic antibodies will probably be required in cocktail form, since escape mutations are so easily selected and are already present at high frequency in clinical isolates. An accurate knowledge of the association of different residues with resistance to each monoclonal antibody will help select the right combinations, avoiding overlapping escape mutations.

However, resistance to such cocktails could still emerge via sequential escape, when a variant that escapes neutralization by one monoclonal subsequently acquires an escape mutation for another monoclonal. This process was demonstrated in the current study, and will help identify such mutants.