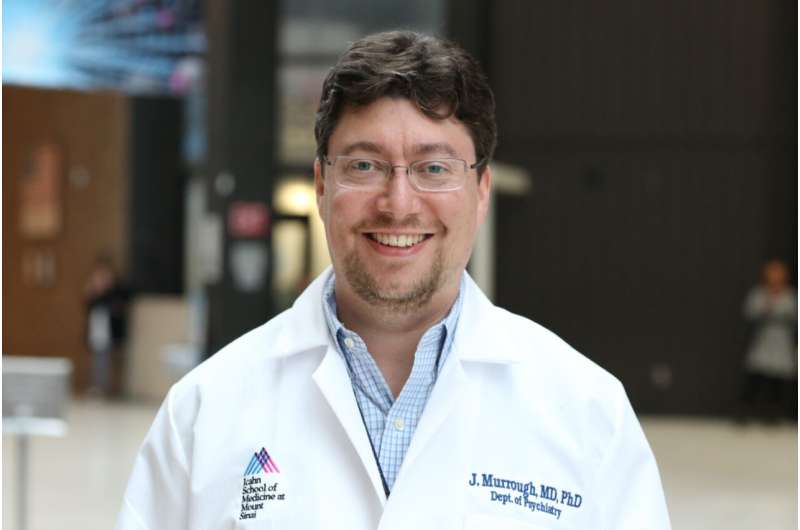 Researchers from the Icahn School of Medicine at Mount Sinai have identified a drug that works against depression by a completely different mechanism than existing treatments.

Their study showed that ezogabine (also known as retigabine), a drug that opens KCNQ2/3 type of potassium channels in the brain, is associated with significant improvements in depressive symptoms and anhedonia in patients with depression. Anhedonia is the reduced ability to experience pleasure or lack of reactivity to pleasurable stimuli; it is a core symptom of depression and associated with worse outcomes, poor response to antidepressant medication, and increased risk of suicide.

Ezogabine was approved by the U.S. Food and Drug Administration in 2011 as an anticonvulsant for epilepsy treatment but had not been previously studied in depression. The research results, published March 3 in the American Journal of Psychiatry, provide initial evidence in humans for the KCNQ2/3 channel as a new target for novel drug discovery for depression and anhedonia.

“Our study is the first randomized, placebo-controlled trial to show that a drug affecting this type of ion channel in the brain can improve depression and anhedonia in patients. Targeting this channel represents a completely different mechanism of action than any currently available antidepressant treatment,” says James Murrough, MD, Ph.D., Associate Professor of Psychiatry, and Neuroscience, Director of the Depression and Anxiety Center for Discovery and Treatment at the Icahn School of Medicine at Mount Sinai, and senior author of the paper.

The new drug target, the KCNQ2/3 channel, is a member of a large family of ion channels referred to as the KCNQ (or Kv7) family that act as important controllers of brain cell excitability and function in the central nervous system. These channels affect brain cell function by controlling the flow of the electrical charge across the cell membrane in the form of potassium (K+) ions. Researchers at Mount Sinai, including study co-author Ming-Hu Han, Ph.D., Professor of Pharmacological Sciences, and Neuroscience, had previously conducted a series of studies in mice showing that changes in the KCNQ2/3 potassium channel play an important role in determining if the animals show depression and anhedonic-like behavior following chronic stress in an experimental model of depression. In particular, mice that appear to be resistant to developing depression in the face of stress show an increase in KCNQ2/3 channels in the brain.

“We viewed enhanced functioning of the KCNQ channel as a potential molecular mechanism of resilience to stress and depression,” said Dr. Han, who also discovered that if he gave a drug that could increase the activity of this channel, such as ezogabine, to mice that had become depressed in the stress model, the mice no longer showed the depression and anhedonic behaviors; in other words, the drug acted as an antidepressant.

The current study was a two-site, double-blind, randomized, placebo-controlled proof of concept clinical trial designed as a preliminary test of the hypothesis that increasing KCNQ2/3 channel activity in the brain is a viable new approach for the treatment of depression. Forty-five adult patients diagnosed with a depressive disorder were assigned to a five-week treatment period with daily dosing of either ezogabine or matching placebo. All participants underwent clinical evaluations and functional magnetic resonance imaging (fMRI) during a reward task at baseline and at the end of the treatment period. Compared to patients treated with placebo, those treated with ezogabine showed a significant and large reduction in several key measures of depression severity, anhedonia, and overall illness severity. For example, significant improvements following treatment with ezogabine compared to placebo was observed using the Montgomery-Asberg Depression Rating Scale (MADRS), the Quick Inventory of Depressive Symptomatology-Self Report (QIDS-SR), the Snaith-Hamilton Pleasure Scale (SHAPS), and the Temporal Experience of Pleasure Scale (TEPS)-Anticipatory Subscale. The ezogabine group showed also a trend towards an increase in response to reward anticipation in the brain compared to placebo although this effect did not reach statistical significance.

“The fundamental insight by Dr. Han’s group that a drug that essentially mimicked a mechanism of stress resilience in the brain could represent a whole new approach to the treatment of depression was very exciting to us,” said Dr. Murrough.

In collaboration with Dr. Han, Dr. Murrough carried out a series of studies in patients with depression to begin to test if the observations in mice could be translated to humans. An initial open-label (no placebo) study in patients with depression led by Dr. Murrough provided initial evidence that ezogabine could improve symptoms of depression and anhedonia in a manner that was associated with changes in brain function.