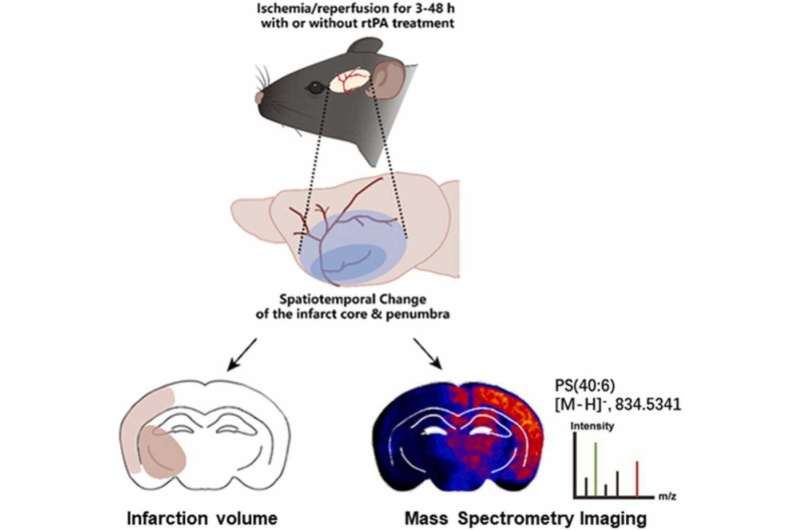 Reperfusion therapy, including intravenous recombinant tissue plasminogen activator (rtPA) and/or endovascular thrombectomy, is the most effective treatment for ischemic stroke. However, there is uncertainty regarding the benefits and risks for recanalization since a large proportion of stroke patients remain severely disabled even after receiving timely reperfusion therapy.

They experimentally determined the quantitative and qualitative alterations in brain lipids during the occurrence and progression of ischemia/reperfusion injury in a mouse model of transient middle cerebral artery occlusion treated with rtPA.

Their study was published in Pharmacological Research on Oct. 3.

Lipids are the most common biomolecules found in the central nervous system, and comprise up to 50% of its dry weight. Lipids have a variety of biological functions in which they can not only provide structural integrity for cell membrane and energy reservoir, but also as precursors for various second messengers for cell signal transduction.

The team discovered that the cerebral blood flow in the ischemic hemisphere restored slowly within nine hours after reperfusion, and then dropped sharply at nine hours to 12 hours, temporally coinciding with the rapid expansion of the infarction core and decreased lipid subspecies, such as phosphatidylcholine [PC(36:4)] and [PC(38:4)], phosphatidylethanolamine [PE(40:5)], phosphatidylinositol [PI(34:1)], phosphatidylserine [PS(40:6)], and sphingomyelin [SM(36:1)]. These lipids could potentially be used as biomarkers of reperfusion injury. Interestingly, some PCs, such as PC(38:7), PC(40:5), showed the opposite trend compared with the others. The regulatory mechanism of any single PC molecules are still open questions.