More than half of severely ill coronavirus patients treated with Ebola drug remdesivir recovered and were discharged from hospital within two weeks, trial results reveal

Gilead was expected this week to announce the results of a clinical trial testing the drug, which was originally developed to treat Ebola patients, in people severely ill with coronavirus.

Half of the patients improved within 10 days of a five-day treatment course and those who were on a 10-day regimen were better by the eleventh day.

More than half of the patients were discharged from the hospital within two weeks, Gilead announced in a press release. 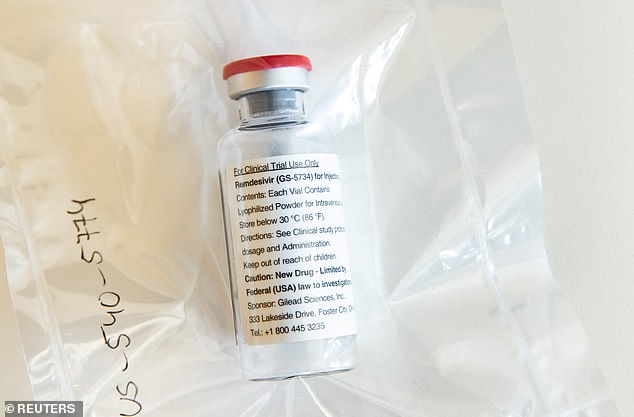 Remdesivir has been among the top contenders of existing drugs being trialled for treating coronavirus, although World Health Organization documents leaked last week suggested it had failed to help patients in a more than 200-person trial recover.

Gilead defended the trial, saying it believed the leaked data was a ‘mischaracterization’ of the study’s results.

It’s unclear whether the newly-announced results are from the same trial.

COVID-19 is considered ‘severe’ if a patient is hospitalized and cannot survive without supplemental oxygen.

The company tried two different treatment regimens – a five-day and 10-day course – but did not include a control arm of patients who did not receive the drug.

Among those who were treated for five days, 60 percent could go home by day 14.

In the 10-day treatment group, 52 percent were discharged within two weeks.