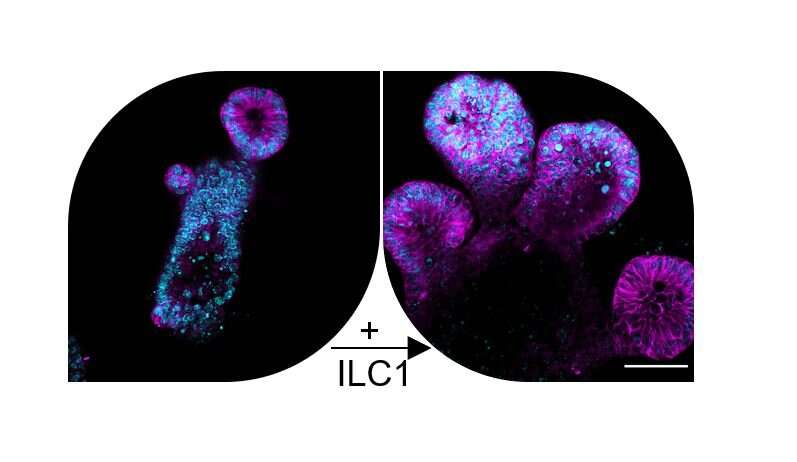 Scientists from King’s College London have discovered an unexpected tissue reparative role for a rare immune cell type in the gut that could tip toward fibrosis or cancer if dysregulated. The breakthrough will have important implications for treating patients who suffer from inflammatory bowel diseases (IBD) such as Crohn’s disease and ulcerative colitis.

In a paper published today in Nature Materials, the team of researchers from King’s College London found that type-1 innate lymphoid cells (ILC1) can promote tissue repair, but when they accumulate in inflamed tissues, can also contribute to IBD co-morbidities such as cancer and fibrosis. It was previously assumed that these cells drove inflammation, so these findings could inspire completely new therapeutic approaches for those suffering from IBD.

To understand the impact of ILC1 on the gut, the academics combined ILC1 with intestinal organoids, miniature versions of the normal intestine that are grown in a dish. Whilst they intended to harness this system to study ILC1-driven inflammation in organoids, they instead found that ILC1 secreted additional proteins that promoted both growth of the intestinal barrier and remodeling of the supporting structure beneath it; a response closely resembling wound healing. However, ILC1’s healing response was only half the story; the team also found that accumulation of ILC1 could trigger fibrotic lesions or exacerbate tumor growth, two common complications of IBD that severely impact a patient’s quality of life.

Lead author King’s College London Ph.D. student Geraldine Jowett admits this finding came as somewhat of a surprise. “Even though the signals we identified were established biomarkers that had previously been associated with IBD, it was exciting, unexpected, and important to discover that these signals were actually coming from ILC1.” she said.

Jowett explains: “It’s a matter of balance: On the one hand ILC1s’ ability to secrete this protein could suggest that we have been thinking about them the wrong way, and that encouraging this healing response could provide hope for the two thirds of patients who currently don’t respond to anti-inflammatory treatments.

“On the other hand, ILC1 may only be beneficial in small doses, and could actually make things worse for IBD patients if they become dysregulated, leading to tumor growth or fibrotic scar tissue formation, outcomes we would want to avoid at all costs.”

This discovery has the potential to inspire new strategies for therapeutic intervention, such as allowing physicians to identify patients that are at high risk for developing IBD co-morbidities that require invasive surgery.

The team’s findings may also have implications for COVD-19 patients, as ILC1 are more typically known as the key first responders to viral infections in the lung and the gut. Even young, asymptomatic patients infected with SARS-CoV2 have presented with early signs of lung fibrosis. Since ILC1 are enriched during chronic viral infections, it is possible that ILC1 also accumulate and play a role in driving fibrosis in the lungs of COVID-19 patients, providing a potential therapeutic target for the urgent research efforts currently underway.

The team’s findings required the authors to develop a complex culture system, as ILC1 are so rare in the gut that they can be hard to study. To accomplish this, they cultured ILC1 alongside human stem cell-derived intestinal organoids in a dish. They then encapsulated the tissues in a synthetic soft material called a hydrogel, allowing them to mimic the 3-D environment of normal intestinal tissue.

Pinning down how the ILC1 could drive fibrosis was particularly challenging and required the team’s expertise in materials science. “Culturing cells in a dish can be so artificial that the results become irrelevant for disease pathology, so it was critical that we performed our key experiments within an environment that could appropriately respond to the biological cues that drive fibrosis,” explains Dr. Eileen Gentleman, co-senior author on the study.

The new hydrogels the team developed for this study were designed using complex computational models, which were key to creating materials that were soft enough to support the organoids, and uniform enough to allow for reproducible measurements of the changes in stiffness created by ILC1.

King’s College London Mucosal Immunologist and co-senior author Dr. Joana Neves remarks: “Many environmental and genetic factors can contribute to IBD, so by combining ILC1 from patients with IBD with this synthetic culture system we were able to provide that extra layer of certainty that it was the ILC1 themselves that were driving the wound healing response, without interference from patients’ diets, mutations, or treatment regimens.”

Thus, the reductionist system developed by this team provides a powerful template for studying the impact of rare cell types on complex processes of development and teasing apart components of multifactorial diseases.