Adding a simple message onto the end of GP phone lines on how to self-care for a cold could cut waiting times, a study suggests.

One practice in Scotland saw the wait for routine appointments drop by 21 per cent after patients decided they no longer needed to see a doctor.

It comes as millions of patients are having to wait more than two weeks to see their GP amid a staffing crisis that is hurting the NHS from all sides.

Family doctors are retiring early or leaving because of workload pressures from mounting practice lists and an ageing population. 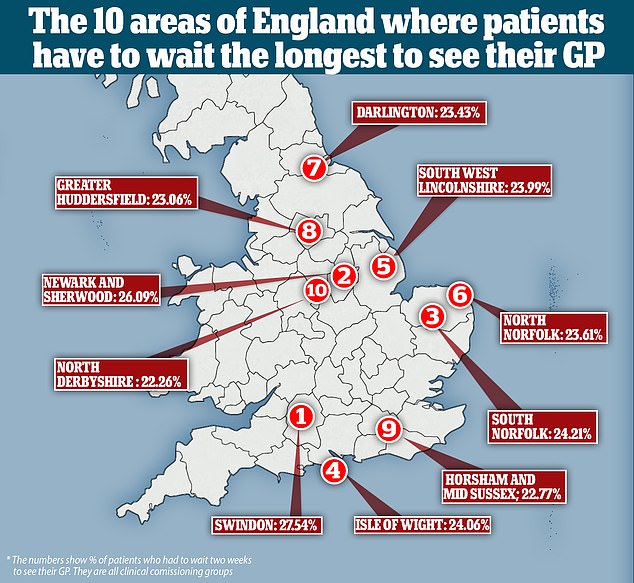 The ten areas in England where patients have to wait at least two weeks to see their GP after calling. Figures are for February 2019, published by NHS Digital

Teviot Medical Practice in Hawick, Roxburghshire, added a message to its telephone system last winter, when demand on GPs is known to spike.

The automated clip, played to callers between November 2017 and March 2018, gave advice taken from the NHS Inform website.

Researchers, led by Dr Robin Kerr at the practice, counted the amount of callers who stayed on the line to speak to a receptionist.

Many people in the area currently have a cold. It’s very common and usually clears up on its own within a week or two.

The main symptoms of a cold include:

a blocked or runny nose

There’s no cure for a cold, but you can look after yourself at home by:

taking over-the-counter painkillers, such as paracetamol or ibuprofen, to reduce any fever or discomfort

using decongestant sprays or tablets to relieve a blocked nose

You only really need to contact your GP if:

your symptoms persist for more than three weeks

your symptoms get suddenly worse

you have breathing difficulties

you develop complications of a cold, such as chest pain or coughing up bloodstained mucus

They compared the numbers to previous data and found that they received 5.5 per cent less routine calls when the clip was played.

‘This study has demonstrated that the use of telephone announcements signposting appropriate patients with the common cold in the direction of community pharmacy or self-management reduces calls navigating to speak to a receptionist.’

The findings were revealed in the British Medical Journal publication Innovations.

Around seven per cent of problems taken to a GP can be dealt with at home or with a pharmacist, the doctors said.

Following their research, the doctors at Teviot Medical Practice said: ‘The authors encourage interested GPs to implement this intervention in their own practices to help improve self-management, reduce seasonal demand and improve patient access.’

This could be a more appropriate action amid the spiralling waiting times to see a GP seen across the country.

Around 3.8million patients were unable to see their GP within two weeks during February, the most recent NHS Digital data shows.

More than 920,000 are having to wait between three to four weeks for an appointment, with some parts of the country fairing worse than others. 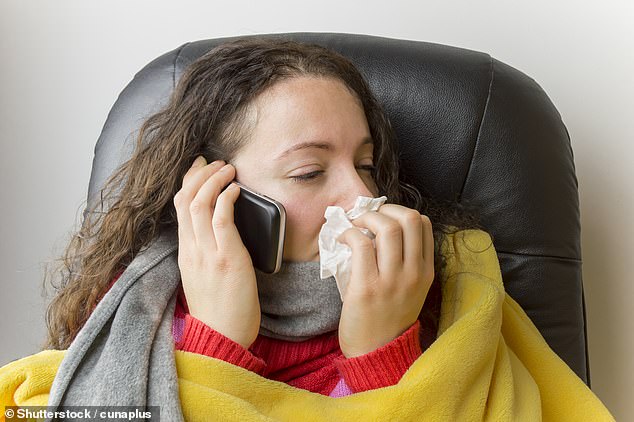 A simple message on the end of GP phone lines on how to self-care for a cold could cut soaring waiting times, findings from one surgery in Scotland suggests

WHAT TEN CCGS HAVE THE HIGHEST NUMBER OF PATIENTS WAITING TWO WEEKS?

In the Swindon CCG area, almost a third (27.54 per cent) of patients didn’t see their doctor for at least 14 days after trying to book.

Chronic shortages of staff in places such as GP surgeries is jeopardising quality of care and waiting times, with staff numbers failing to keep pace with demand.

More than 1,000 GPs have left the NHS since 2015, and official figures in February showed that a further 10,000 are expected to quit in the next five to ten years because they are 50 or over.

Almost a fifth (18 per cent) said they would leave or retire within the next two years, blaming unmanageable workloads and increased demands from an ageing population.

Pressures faced by doctors also include a rising number of patients, some with multiple complex health conditions.

This has led to concerns that the average consultation time of 10 minutes in the UK – thought to be the shortest in the developed world – is simply not enough.

Doctors are also avoiding working extra shifts or leaving the profession early in a bid to avoid hefty tax bills on their pension.

More than 3,500 doctors retired early to avoid bills of thousands of pounds on capped pension saving allowances, the Government said this week.

The complexity of the crisis is expected to put 762 practices in the UK at risk of closing within the next five years, according to The Royal College of General Practitioners.

More than 2.5million patients across England could see their GP surgeries close in the next five years, experts revealed in November.

Overall, NHS staff shortages in England have hit more than 100,000 positions, according to three think tanks, the King’s Fund, the Health Foundation, and the Nuffield Trust.

They predict that the situation could increase to almost a quarter of a million by 2030 if not dealt with.