Until a few months ago, Philip Dalidakis hadn’t given much thought to his heart.

He’d passed a calcium scan and a stress test five years ago “with flying colours”, so as far as he was concerned he was home scot-free. 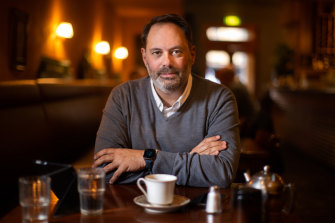 Philip Dalidakis, the former Victorian minister for innovation and the digital economy, had ‘zero’ symptoms of heart problems, but an angiogram last week revealed one of his arteries was 95 per cent blocked.Credit:Simon Schluter

Then at a lunch with friends not long after the shock death of 52-year-old Shane Warne in March, the conversation turned to heart health.

“It started a discussion around the table about how we should all be mindful that we’re all in our mid-40s or later and probably not as active as we once were,” says the former Victorian minister for innovation and the digital economy. “Sedentary or lazy is the word.”

One of the group had seen a cardiologist already, so Dalidakis got his name, made an appointment with his GP and asked for a referral.

Though the 46-year-old father of two had “zero symptoms”, he has type 2 diabetes, is by his own admission a bit overweight and has a family history of heart disease. The cardiologist booked him in for a CT scan. 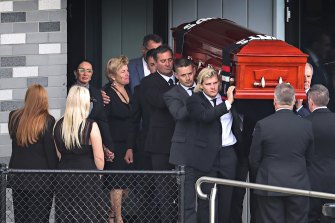 The coffin of Shane Warne is carried out by his son Jackson on March 20, 2022.Credit:DAVID CAIRD

The morning after the scan, he received a call from his cardiologist: Dalidakis needed to have an angiogram. Quickly.

Last Monday, as he was being wheeled into the theatre, the cardiologist explained that there appeared to be a blockage, but an angiogram was the only way to be sure.

“I was awake throughout the procedure,” Dalidakis says. “It was quite surreal.”

The angiogram confirmed he did have a blocked artery on the left side of his heart: “He told me it was 95 per cent blocked. I said ‘at what point do I have a heart attack?’ and he said ‘when it gets to 100’.”

The cardiologist opened the blocked artery and inserted a stent. Dalidakis was in and out in 45 minutes.

“I’m so grateful,” he says. “If Shane Warne hadn’t died I’d literally be walking around as a ticking time bomb because, without symptoms, I could have been going for a walk and had a heart attack and had no one around assist. That, for me, was pretty scary.”

Dalidakis has good reason to be grateful. Ischaemic (meaning restricted blood flow and oxygen) heart disease is the biggest killer in Australia.

About half of those with high blood pressure or another heart issue are unaware there is a problem until something serious happens, says Julie-Anne Mitchell, the national director of health strategy at Heart Foundation. She adds that, according to Heart Foundation surveys, about one in three heart attack survivors say they had no symptoms in the lead-up.

It’s estimated that more than half of people killed by a heart attack die suddenly.

While heart disease is the leading cause of death in men and the second-leading cause in women, it is not the only killer that can creep up on us.

Professor Simon Laws is the director of the Centre for Precision Health at Edith Cowan University. Laws explains that changes in the brain are often occurring for a “significant period” of up to 15 to 20 years before a person experiences symptoms of Alzheimer’s Disease.

While this can all seem scary, there are things we can do.

The one heart test everyone should do

Heart disease, particularly atherosclerotic disease, is up to 90 per cent preventable, says Mitchell.

Everyone, from the age of 45 – and 30 for people of Aboriginal or Torres Strait Islander descent – should get an annual heart health check.

It is covered by Medicare, takes about 20 minutes and includes a lifestyle assessment, family history and check of blood pressure, cholesterol and blood sugar levels.

“Only about 50 per cent of people who are eligible for a heart health check are going,” says Mitchell, who adds that if any further tests are needed, a GP will make a referral to a cardiologist. “The best person to determine what additional tests you need is a GP.”

This common test may be the future of dementia risk assessments

There are no routine tests to accurately diagnose or predict dementia, Laws explains. A type of brain imaging called positron emission tomography (PET) can detect the accumulation of proteins in the brain related to dementia, particularly in Alzheimer’s Disease. This, he says, is “as close to a gold standard that is available”.

PET, however, is expensive and “not the best tool” for everyone. A new study Laws was involved with holds promise for a more affordable, accessible way to determine the risk and intervene early.

Bone density screening is common among older adults, takes no more than 20 minutes and is covered in full or part by Medicare. An extra image taken during this screening can detect calcium build-up in the abdominal aorta, referred to as Abdominal Aortic Calcification (AAC).

In the study, published in The Lancet in June, Laws and his team demonstrated that women in their 70s with AAC had a “substantially higher” dementia risk.

If further research can prove it works across the population, getting tested in our late 50s or early 60s could “provide a much greater scope for interventions to have a real impact on delaying or even preventing dementia”.

Until then, from the age of 45 we should have an annual health check with our GP and be active in reducing our risk by taking care of our heart, body and mind health through regular mental, physical and social activity, a healthy diet, not smoking and drinking alcohol in moderation.

According to Laws: “Approximately 30 per cent of cases are preventable through addressing modifiable factors, such as lifestyle.”