People with love handles or beer bellies face a greater risk of dementia: Excess fat may trigger the immune system to shrink the brain

People with love handles and beer bellies may be at greater risk of dementia.

If someone is both obese and apple-shaped, carrying more weight around their middle than on their hips, a study has found they have a smaller brain.

British researchers discovered less grey matter in these people, suggesting their brain had shrunk. This shrinkage raises the risk of memory loss and dementia in older age. 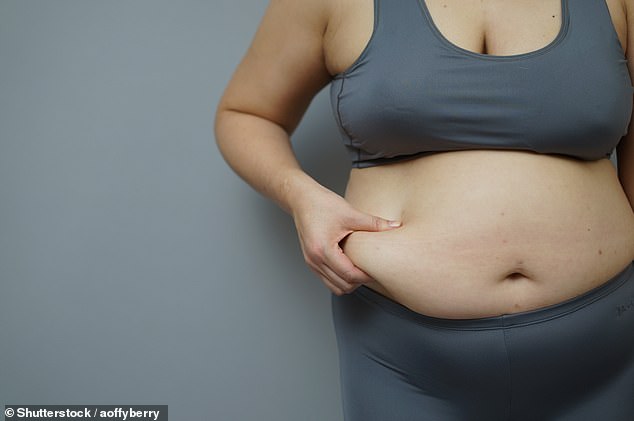 Researchers led by Loughborough University looked at more than 9,600 people aged 40 to 69, measuring their waist and hips as well as their body mass index (BMI).

People with a high waist-to-hip ratio can be men with beer bellies or women with ‘muffin tops’ who have slimmer hips compared to their abdomen.

Obese people with this body type had 1.5 per cent smaller brains than those of healthy weight, the study found.

Experts think fat could trigger the immune system to overreact and damage the brain, causing it to shrink and raising the odds of obese people starting to lose their memories.

But becoming obese and apple-shaped may also be a ‘red flag’ that someone is at risk of memory loss.

Their brain may already have shrunk, causing them to pile on weight after losing grey matter in the brain regions which help to control your appetite and feel full.

Women with slim hips could be at risk of diabetes and heart attacks, researchers showed last month.

Experts have long warned that putting on weight is dangerous for health – but the new research reinforces the theory that the part of the body where fat accumulates has a major impact.

Putting on weight around the hips is actually safer than if it accumulates around the belly or is stored around major organs such as the liver or pancreas, the scientists found.

The research team, from the University of Cambridge, found some women are genetically less able to store fat at the hips.

This puts them at risk of type two diabetes and heart disease because when they do put on fat it is more likely to circulate in the blood, gather around the belly or become wrapped around organs.

Dr Mark Hamer, who led the study from Loughborough University, said: ‘Our research looked at a large group of people and found obesity, specifically around the middle, may be linked with brain shrinkage.’

He added: ‘This will need further research but it may be possible that someday regularly measuring BMI and waist-to-hip ratio may help determine brain health.’

After using a tape measure to calculate people’s waist-to-hip ratio, scientists put them in MRI scanners to look at their brains.

They found almost 1,300 study participants were obese and apple-shaped, and that they had less grey matter, which is important for thinking skills. Losing grey matter is linked to increased forgetfulness and greater odds of getting dementia.

Obese people carrying weight around their middle had the lowest average amount of grey matter, at an average of 786 cubic centimetres, compared to people of a healthy weight who had an average of 798 centimetres.

Brain shrinkage was less for people who were obese but did not have a high waist-to-hip ratio, suggesting both are important.

Dr Hamer said: ‘While our study found obesity, especially around the middle, was associated with lower gray matter brain volumes, it’s unclear if abnormalities in brain structure lead to obesity or if obesity leads to these changes in the brain.’

Dr Rosa Sancho, head of research at Alzheimer’s Research UK, said: ‘While BMI can be a crude measure and not necessarily a good indication of our general health, this research suggests that taking a person’s waist-to-hip ratio into account may provide additional information that could be relevant to the health of the brain.

‘The study adds to existing evidence highlighting a link between a healthy weight and a healthy brain, but the researchers didn’t look at whether participants went on to develop diseases like Alzheimer’s and this will need to be explored in future research.’