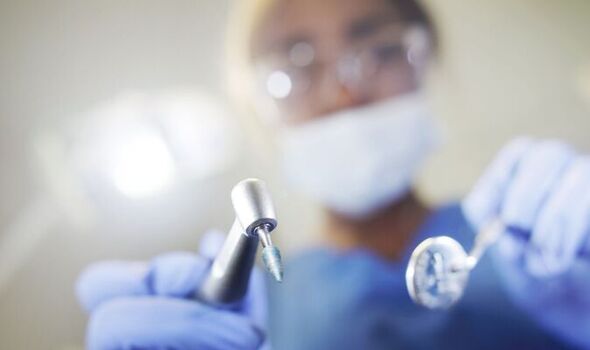 Many people in the UK are waiting weeks or even months for a dentist appointment, and those who are not registered with a surgery are likely having trouble finding one that is accepting new NHS patients.

Last year, more than 2,000 dentists quit the NHS, according to figures obtained by the Association of Dental Groups (ADG) under the Freedom of Information Act.

This has led to parts of the country being described as “dentistry deserts,” with the lack of availability having a major impact on wait times and the number of NHS surgeries accepting new patients.

Covid-19 backlogs are another reason for the longer wait times.

In recent times, because of lengthy waits for an appointment, more people have turned to DIY dentistry. This could include using a filling kit from a pharmacy or, in extreme cases, someone might pull out their own teeth to relieve the pain or ask others who are not dentists to treat them.

One person who took matters into her own hands was Jacqueline Shepherd, who was in such “horrendous” pain that she resorted to pulling out her own tooth after waiting more than five months for an appointment.

The 56-year-old from Nottingham told Nottinghamshire Live: “I have a high pain threshold, but it was too painful.

“I kept twisting it; it took me two days to finally get it out.”

Ms Shepherd said the pain began due to medication that caused a vitamin D deficiency and loosened her teeth.

“It meant my teeth were getting looser and looser,” she said. The mother-of-two, who was left without a dentist after the pandemic and unable to afford private treatment, spent hours every week trying to get an appointment.

When she called 111 on three occasions she was given more numbers for unavailable dentists, Ms Shepherd said.

“It was a nightmare,” she said. “I even went to the walk-in centre and was told there was nothing they could do – I burst into tears. It took me five months to finally get into a dentist.”

Elsewhere in Leeds, David Sergeant claims he has been pulling his teeth out for the last 15 years because he has been unable to get an NHS dentist appointment.

The 50-year-old told Leeds Live he prepares by loosening the tooth gradually over time, and then he downs a couple of beers and “fills himself up” on Ibuprofen to numb the pain before yanking the tooth out.

The former butcher now has an almost toothless grin, with multiple empty cavities showing how many times he’s had to resort to such drastic action.

I’m having to pull my own teeth out when I should have somebody looking after me.

He said: “I’ve been pulling my own teeth out. I haen’t been able get an NHS dentist for 10 or 15 years. I’ve tried referrals from the doctors, and there’s nowhere that will take me.

“It doesn’t feel very good. At the end of the day, I’m having to pull my own teeth out when I should have somebody looking after me.”

The NHS has advised against self-treatment, asking people in need of help to call the NHS 111 number or a local dentistry practice.

What the NHS had to say

An NHS spokesperson said: “Anyone with concerns about their dental health should contact a local dentist practice as they usually would or seek advice from NHS 111.

Recently announced reforms to dentistry services are supporting practices to improve access including by giving high-performing practices the opportunity to increase their activity and treat more patients – with discussions around further changes that benefit patients and staff ongoing.

“Infection prevention and control measures to protect staff and patients were introduced during the pandemic, limiting the number of procedures that NHS dentists could carry out, however, these have now been lifted so dental teams are operating at full capacity for the first time in two years.”

What to do if you cannot get an NHS dentist appointment

People struggling to find a dentist that is accepting new NHS patients should call NHS England’s Customer Contact Centre on 0300 311 2233 or click here.

If they are in need of urgent care and are registered with a surgery, they should contact their dentist as some offer emergency slots and will provide care if clinically necessary.

However, if they are not registered with a dentist or their surgery is unable to schedule them in for an emergency appointment, they should call 111.

They should not contact their GP as they will not be able to help with urgent or emergency dental care.